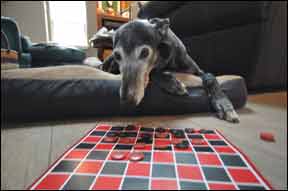 Anipryl (selegiline, l-deprenyl) is the only medication approved for use in dogs to treat CCD. It is a monoamine oxidase inhibitor (MAOI), which can cause negative side effects and is unsafe to combine with a number of other drugs, including antidepressants, such as fluoxetine (Reconcile, Prozac) and clomipramine (Clomicalm); amitraz (Certifect, Preventic collar); and dl-phenylalanine (DLPA), used to treat chronic pain. There is evidence that it provides some benefit for dogs with CCD, but it is not a cure.

In the last few years, several companies have introduced supplements designed to help dogs with CCD. While the scientific evidence presented for each is limited and often weak (many studies are not placebo-controlled or double-blinded, most are sponsored by the manufacturer, and results are not always statistically significant), studies and anecdotal reports indicate that these supplements can help many dogs.

Newest to the market
Neutricks, from Quincy Animal Health, was released in November 2010. It contains a calcium-binding protein called apoaequorin, derived from jellyfish. The parent company, Quincy Bioscience, markets a comparable product for humans called Prevagen.

The company commissioned a couple of small studies to be conducted by CanCog Technologies on senior laboratory dogs that appear to demonstrate improvement in learning and memory when compared to controls and to those given Anipryl. Gary Landsberg, DVM, Dipl. ACVB, Dipl. ECVBM-CA, a veterinary behaviorist and adjunct professor at Ontario Veterinary College in Canada who is also director of scientific affairs for CanCog, feels the product has demonstrated effectiveness.

Dog owners who participated in a 30-day trial reported an overall improvement of 24 percent, primarily in sleep, disorientation, and especially housetraining, with less improvement in interaction, disposition, and pain. Very few side effects are reported, and the supplement has no known interactions with other medications. Improvement is commonly noticed within a few days of starting the supplement.

Neutricks is widely available online. The suggested retail price is $60 for 60 tablets, with one-third off when you buy multiple bottles. Recommended daily dosage is 1 tablet for dogs under 40 pounds, 2 tablets for dogs weighing 41-80 pounds, and 3 tablets for dogs over 80 pounds. I found it discounted to as low as $25.60 for 60 tablets at Amazon.com, where 26 of 29 people gave it 4 or 5 stars in their reviews.

Not The Same-O
S-adenosylmethionine (SAMe, pronounced “sammy”) is a supplement that has been around for a long time, but has only recently been used to treat CCD as well as dementia in humans.

Novifit was developed by Virbac Animal Health and tested on client-owned dogs. A favorable response was seen after one month and increased in the second month. After both 4 and 8 weeks of treatment, there was a 44 percent reduction in problem behaviors (compared to 24 percent in placebo-treated dogs), including significant improvement in activity, playfulness, less housesoiling, and awareness. There was moderate improvement in sleep problems, disorientation, and confusion, though no benefit was demonstrated for anxiety. CanCog also performed studies showing improvement in cognitive processes, such as attention and problem solving in laboratory dogs.

SAMe can also help with liver disease, arthritis, and depression. Nutramax markets it as Denosyl, used for liver support, or you can buy SAMe made for humans. It’s absorbed faster when given on an empty stomach, but concentrations are maintained longer if SAMe is given with a meal, according to Virbac. Minimal side effects are reported, and SAMe is considered safe to use and to combine with other treatments.

Note that, while it is rarely mentioned, SAMe requires certain B vitamins to produce full benefits. It may be best to give a B-complex supplement daily when using SAMe.

Combination Approach
Another nutraceutical that has been talked about for some time is phosphatidylserine (PS), a phospholipid that may improve learning and memory. Most PS is derived from soy lecithin, though a few supplements use other sources, such as sunflower lecithin. The percentage of PS in lecithin is low, so lecithin alone will not provide therapeutic doses.

Ceva Animal Health introduced Senilife, which contains PS along with ginkgo biloba, vitamin E, pyridoxine (vitamin B6), and resveratrol (grape skin extract), in 2008. The company says that its own studies show that Senilife produced significant improvement in sleeping problems, playful behavior, apathy, response to commands, and disorientation, with improvements starting within 7 days and increasing over 30 days. CanCog performed one study on Senilife that showed improved short-term memory that may persist for at least 70 days after the supplement was discontinued, indicating potential long-term benefits.

Senilife is available in two sizes, for dogs up to and over 50 pounds. This product has been on backorder, but I spoke with a company representative who said Senilife should be available by the time you see this.

Plan B
Choline, usually grouped with the B vitamins, has been shown to be effective in treating cognitive disorders and seizures in both humans and pets. It is involved in the same chemical processes as SAMe. Choline is a component of phosphatidylcholine, another phospholipid found in lecithin. Most homemade diets I’ve analyzed have been short on choline, which is often omitted from multivitamin and mineral supplements. The National Research Council recommends about 100 mg of choline daily for a 5-pound dog, 500 mg for a dog weighing 40 pounds, and 1,000 mg for dogs weighing 100 pounds. The best food sources I’ve found are eggs (126 mg choline per large egg) and liver, particularly beef liver (more than 100 mg per ounce).

Other supplements that may help with CCD include DHA (omega-3 fatty acid found in fish oil), acetyl-l-carnitine, and antioxidants, such as vitamins C and E (also found in fresh fruits and vegetables), selenium, Coenzyme Q10 (CoQ10), alpha-lipoic acid, N-acetyl cysteine, and resveratrol.All of these supplements should produce improvement within a few days to a month. If you don’t see any changes by that time, it’s unlikely that giving them longer will help.

Keep in mind that some studies have shown that older dogs do best when given behavioral enrichment along with nutritional supplements. The two together work better than either does by itself. Enrichment may include exercise such as walks, learning a new trick or other types of training, puzzle toys, or anything else that engages your dog’s mind. Even dogs with little mobility can enjoy games such as scent discrimination.