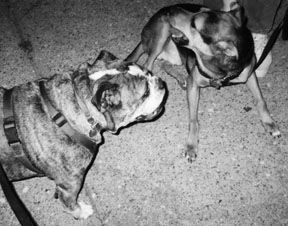 I am new to alternative medicine for pets, and would like to share my experience so far. I have two dogs, a six-year-old Golden Retriever and an eight-year-old German Shepherd. Both have benefited from holistic care.

It started with Riker, my Golden Retriever. I got him as a rescue at eight weeks of age. He had kennel cough and almost didn’t survive. My allopathic vet helped me nurse him through it, and he has been healthy since. I trained him in obedience; Riker loves to work and will do anything to please.

I had his hips checked at age two before seriously jumping, and all checked out OK. I had never trained a dog for obedience before, so it was a new learning experience for both of us. We got our CD, then our CDX, and on to Utility. Riker is not your average Golden; he is extremely soft and would panic in the ring, especially on the exercises he had to work on his own across the ring.

We got through two of the three legs needed for the title before tragedy struck.

One day, after a grueling four-day show, I noticed when he stood up from lying on the floor, he would not use his right rear leg for several steps; it just dangled. After a few steps he was fine.

Nevertheless, I brought him to my regular vet. Her concern was that Riker might be about to burst a disk in his spine. She ran all sorts of tests: X-rays, thyroid, and a myleogram (an x-ray film taken after injection of a dye into the spinal cord). The tests revealed degenerative hip dysplasia.

The veterinarian said she had only two imperfect remedies: pain killers and surgery to replace at least one hip. She thought there was no possibility that Riker would ever compete again, and foresaw a life of pain and more degeneration for Riker.

Determined to find options
I started reading and researching. If we could never compete again, I knew there were at least alternatives to a life of pain and stiffness. I read up on nutrition and physical conditioning. I changed the diets of both my dogs, adding antioxidants, glucosamine, raw veggies, and raw meat. I started swimming Riker three days a week.

The breakthrough came when several friends recommended a local holistic veterinarian who had done wonders for their dogs. I called and Dr. Larry Bernstein came into our lives. He took a medical history and asked me what the traditional veterinarians told me could be done. He explained his ideas and treatment plan, including nutrition and acupuncture.

Dr. Bernstein also started an acupuncture treatment program and supplementation with Chinese medicinal herbs. He gave me some moxa sticks (cigar-like sticks that are made out of a slow-burning herb and held near the skin to warm the area and increase circulation, and are often used in conjunction with acupuncture) showed me how to give Riker a moxibustion treatment. Every night I give him 10-15 minutes of moxibustion on his back and hips.

Riker returns
I have to admit, the turn-around was not instantaneous, but with several treatments, swimming, and super nutrition, Riker was soon running and jumping the bushes out in front of my house to get the morning paper again.

After three months, I entered in one last show. It was a purely selfish thing, but I really wanted Riker to get that UD title. We practiced without any jumps, and then, a week before the show, I had him take two small jumps every other day during training.

When we entered the ring, he looked at me as if saying, “We can do this, Mom.” We were both cool, calm, and collected. And we did it! We not only qualified, but earned a score of 191 1/2 (out of 200). The house came down. All my friends who had been following our ordeal cheered, and there were a few wet eyes.

The kicker came the next day, when we qualified again. Our score wasn’t quite as good, but to qualify two days in a row in Utility was something we had never done before.

U-CD Commander Wm Riker, UD, WWCD, CGC and I are no longer competing. We play catch/fetch games, though, and do lots of swimming. We see Dr. Bernstein every six weeks for an acupuncture treatment, and it has made a world of difference in Riker. I now realize he was probably in pain for a long time, but he wouldn’t let me know.

Different problems, same solutions
My eight-year-old Shepherd Troi (U-CD Nirenberg’s Deana Troi, CDX, WWCD, CGC) has also benefited from Dr. Bernstein’s holistic methods. She always had skin problems; allergy tests showed she is allergic to everything except dust and cats! She was constantly on prednisone, and was overweight and lethargic. With the diet change, however, she lost weight, has a beautiful, soft coat, and acts like a puppy again.

A few weeks ago, one of my soft-sided crates fell and hit her back. She was in pain, but a good massage relieved the immediate cramping. I made an appointment to take her to see Dr. Bernstein.

She limped into Dr. Bernstein’s office, and he gave her an acupuncture treatment and a chiropractic adjustment. When she got up, she ran around in circles, no limp, no cramps, just joy! When he left the room, she sat at the baby gate separating the treatment room from the rest of the building, wagging her tail, going “Woof woof!’ in a “Come back, come back!” tone.

After three sessions, she is back to jumping on the couch all by herself, and herding Riker when he retrieves – all without any prednisone. She now gets a nightly moxa treatment; it is very relaxing and a bonding experience. Troi’s last health episode was a lump on her elbow. Both Dr. Bernstein and the allopathic vet recommended removing it, so she had surgery. Before and after surgery she got Chinese herbs to help with clotting.

Two weeks after surgery, her elbow suddenly swelled up – soft, mushy and tender. I took her to emergency care (it was a Saturday afternoon), and the vet on duty checked it out. He thought it was just joint swelling; he didn’t observe any pus or infection, but he said that if it didn’t go down, the surgeon might want to put in a drain.

The next day we had our regular appointment with Dr. Bernstein, and he used a therapeutic laser over the incision and swelling. He also have her a homeopathic remedy to help flush her system from the anesthesia and surgery. By evening, the swelling was 90 percent gone, and two days later, completely gone. The best news: the lump was benign.

Amazing alternatives
In less than a year I have been amazed at what natural holistic care can do. I’ve been using some of what I learned on myself and my husband, with great success! Recently I began researching my next dog – I’d like to get a Belgian Tervuren – and I found an email list of people who are raising Belgian Tervurens holistically. Hurray! I’m definitely looking forward to starting out with a healthy dog and keeping it healthy with good food and holistic care.