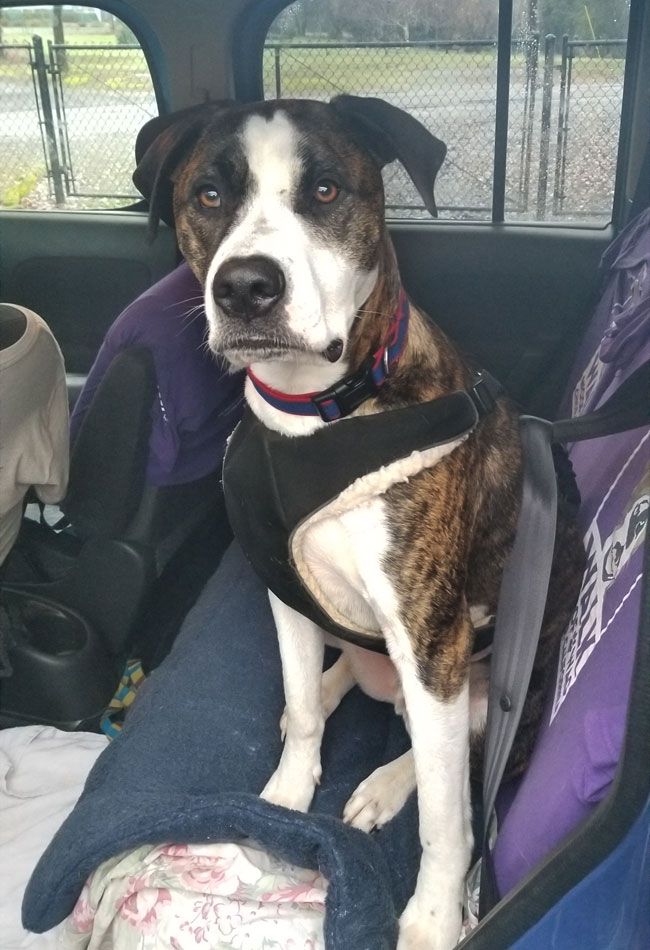 Just over a week ago, I was in one of those car accidents that remind you to slow down and not take life and health for granted. Not that I was speeding; a crash happened about 10 or more car lengths in front of me, and I managed to stop the car without hitting the mess in front – and so did the guy behind me – but the car behind both of us didn’t. We were hit from behind fairly hard. My car was banged up, and my passenger and I definitely felt some aftereffects of whiplash, but afterward, all I could think of was that I was so glad I didn’t have any dogs in the car. (Virtually all of my friends: “You didn’t have a dog with you??!”)

Not only do canine seat belts prevent dogs from being thrown through the car like a dangerous projectile in a car crash, they keep dogs from being flung out of the car onto the roadway – or escaping in a panic through broken windows immediately afterward. The accident was somehow confined to the middle lane of five lanes– and this being a big city on a Saturday afternoon, traffic continued to pour past the damaged and disabled cars on both sides, at least until the Highway Patrol came and stopped the traffic on the right two lanes so an ambulance, a fire truck, and several tow trucks could attend to the hurt drivers and disabled vehicles. If a dog had been thrown out of any of the crashed cars, or had escaped from one, the dog’s death under a passing car would have been the next horror to happen. Again, I didn’t even have a dog with me, but I can see that happening as clearly as I can see what actually did happen.

There are many online groups that have Facebook pages where members can share information about lost dogs, and at least a couple times a year, I see a post from someone who lost dogs in the chaos of a car crash and is hoping beyond hope that the dog will be found unhurt. But there’s nothing like your own crash, or one that happens to a friend, to remind you that protecting your dog is just as important as protecting your children and other loved ones in a car.

Let me be that friend. Buckle up those pups!

(And, yes, I’m gathering products for an updated review of canine seat belts and other car restraints.)