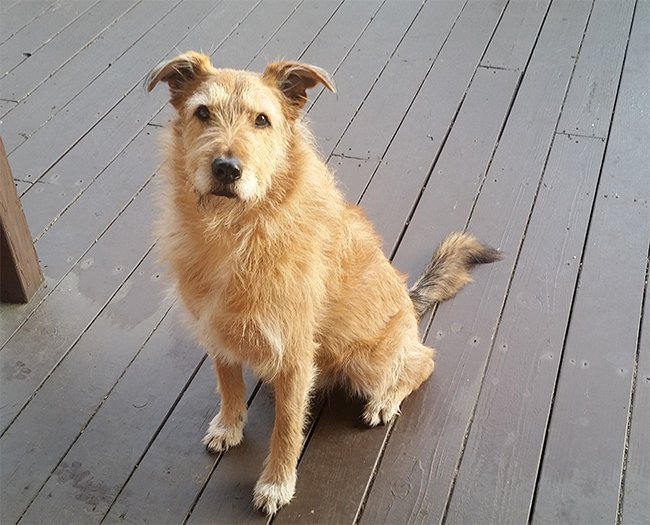 My brother passed away a couple of weeks ago after a fairly short and intense battle against cancer. He leaves behind a wife and young daughter. Its been a very sad, hard time for my family.

We held a memorial service for my brother last weekend. We rented a rustic building in a beautiful, wooded park in a Sierra town near where he had lived for many years. My sister who is a chef lovingly prepared much of the food. My sister in laws many friends and co-workers helped up set up the hall, with live lavender plants on every table, and a local musician my brother had admired played the guitar. Friends and family members traveled from all over to help us remember my brother and celebrate his life.

My dog Otto and my sons dog Cole were present for the event. Every member of my family loves dogs, not least, my brothers five-year-old daughter. She absolutely adores Cole, and his eyes light up when he sees her; they get along like peanut butter and jelly. I thought, correctly, that she would enjoy having Cole at the event  and I knew Cole would enjoy socializing with all the guests. Hes happy and polite and well-mannered and his coat is like silk. I thought he could be a good therapy dog for the memorial.

To be honest, I brought Otto for my own therapy. I mean, hes well-behaved, too, and I had him groomed the day before, but I didnt think hed ever make it in the building; it has slick floors, and Otto doesnt really DO slippery floors. But I thought hed be fine immediately outside the building; it has a covered deck that wrapped around two sides of the building, and we had the double doors on both sides of the building wide open all day, and I brought his mat and a bowl of water.  We worked for three hours to set up for the event, and the whole time, he mingled with all of the helpers  out on the deck. Several people tried to encourage him to enter, and each time, he politely declined, tail wagging but ears set back; nope, no thanks. Too slippery. So I stepped outside every 10 minutes or so to hold his head in my hands and compose myself. In between those moments, he lurked just outside one or the other of the doors.

People began arriving. We had distributed round tables with folding chairs all around the room, and chairs lined the walls, and at the time that we were supposed to begin, the tables and chairs were all full and dozens of people were standing in the back of the room. My sister-in-law asked me to be the first to speak, and I did, through tears. Then I sat down at the front-most table, and my sister-in-law spoke, and my tears only increased. And then I felt a dog nose nudge me, and I turned around, expecting to see goofy, happy, confident Cole, but instead it was Otto  wobbly-legged, panting with concentration, and clearly determined to comfort me. He must have heard my quavering voice, and somehow made his way through the crowd, across the entire floor, to offer himself to me. Oh, how I love this dog, and oh how he loves me, and I could not be more grateful.

He made that trip through the crowd several times during the memorial, growing a little more confident and a little less wobbly each time he did so. People reached out and petted him as he worked his way around the tables, and occasionally he would stop and allow them to pet him for several minutes before setting out again. It was really something to see, my new therapy dog.

Nancy Kerns
5
Over the 23 years Whole Dog Journal has been published, we’ve discussed pet food recalls due to contamination with Salmonella a number...