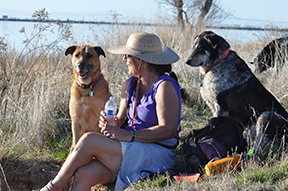 I got to dog-sit my son’s new puppy, Cole, this weekend, while he was out of town at a tournament with his sports team. I actually pulled rank on my son’s girlfriend, who volunteered to be the one who dog-sat Cole this weekend. I wanted to see how Cole’s training was coming along; my son shares his college home with four other young men, all of whom love dogs and have dogs back at their parents’ homes, but who all have varying amounts of proper dog-training knowledge and experience. I was curious if Cole’s good manners, installed with great effort here at my house, were surviving his new living situation. (As one example of the challenge that Cole’s behavior faces, my son told me about coming home from class one day and finding one of his roommates and Cole sitting on the couch practicing howling together. Since Cole’s mama is an American Black and Tan Coonhound, howling is a foregone conclusion, but one we were hoping to keep under wraps as long as possible. My son is training Cole and his roommates.)

Also, my dog-walking friends, who enjoyed six or so weekends of hikes with Cole and our packs of dogs before my son took custody of the pup, were clamoring to see Cole again. All of our dogs are adults over four years old, and none of us can believe how much we miss a puppy’s antics out on the trail.

This trail time is a fantastic opportunity for Cole to be schooled by a variety of sane, well-adjusted adult dogs in the many subtleties of canine language. Dogs communicate with each other with every posture, motion, angle, and tensing of their bodies, and to be a true master – a dog who can go anywhere and get along with any other dogs – an individual needs to be exposed to lots of other dogs: playful ones and grumpy ones, big and small, furry and short-haired, long-tailed and bob-tailed, ones with pointed ears and dangling ones, smoosh-faced ones and long-nosed ones.

There is almost no better place and way to do this than off-leash on a trail. When dogs get taken to a dog park to play, many of them arrive full of pent-up excitement (and often, frustration); their expectation is to run and play like maniacs every time, and they often start screaming or whining with excitement blocks away from the park. In contrast, when my friends and I take our dogs to one of our favorite trails, the dogs know we are going to be walking somewhere; the focus is on the trail and the journey, not necessarily on each other.

Sometimes I go alone, with just my two dogs and Cole, but I have two different friends I walk with a lot, and one has two dogs, and one has three, so the “pack” may be five or six dogs. A few times, we’ve all met and had a total of eight dogs walking together. But no matter whether it’s just my three or more, when we get there, we immediately head out. The interaction with the other dogs happens along the way.

In the beginning, Cole pestered any dog he was near, licking at their faces and trying to gain their attention and/or get them to play with him. Exactly none of these adults want to play with him; they are all busy with the trail and paying attention to their own packmates and owners. So he gets the brushoff in many, many different ways. The Chihuahuas — mine (Tito) and my friend’s (S’mores) – pull out the big guns from their outset, and snarl and attack him like tiny wolverines. Early on, this behavior scared him so much that he’d often fall down while trying to run backward. Now he understands how small they are and how big he is, he has fun staging mock attacks on them, just to get them to rush him with all their teeth showing, so he can romp away with obvious enjoyment. They would be better off ignoring him, as the big mixed-breed matrons of our packs (Matilda and Indi) do. Both have taken to turning their heads away from Cole so thoroughly that they sometimes spin in an entire circle of avoidance, then cantering off, tails wagging the whole time. The reaction is such a non-event, Cole gives up almost immediately.

Chaco, one of my former fosters, sprints away from Cole every time he is near – and through him, if necessary. She’s built (or fed) a bit like a barrel, and she seems to have learned that the puppy is still quite uncoordinated, and she can knock him off his feet with enough brio. After being rolled a few times in their encounters, Cole pretty much leaves her alone!

Cole gets the most education from following and trying to engage Otto and Otto’s favorite friend, Lena. A mixed-breed who is nearly the exact same size and height as Otto, Lena had ACL surgery two years ago. Her vet told her owner that Lena’s hips are both awful, too, and will probably require surgery at some point. In an effort to help Lena last as long as possible, my friend keeps Lena lean, and we often keep her on a long-line on these walks, so she doesn’t sprint and turn and romp her way to an earlier surgery date. She and Otto both use fantastic facial expressions to help control Cole’s behavior: lifted lips, wrinkled brows, stiffened ears held back, and so on. If he doesn’t see or read these properly, neither dog will hesitate to growl/snap/lunge at him. Bit by bit, he’s learned the proper range of responses: to get out of their faces for minor infractions of the polite canine behavior code for a puppy, or, if his offense is of the highest order, to throw himself onto the ground and roll over in apology/obsequiousness. And because both dogs are sane and well-adjusted themselves, he’s learning the whole range.

When I was a kid, my sister had a very dog-aggressive Chesapeake, who terrorized all of our other dogs (my parents were super irresponsible dogs owners, and we had a lot of dogs) and was eventually euthanized for his crimes against other dogs. I had a Kelpie-mix who grew up under the Chesapeake’s reign of terror, and while he was never as criminally insane as the Chesapeake, his acquisition of canine language was definitely warped by his upbringing under a tyrant; he became a lesser tyrant himself. Whereas the Chesapeake could see a dog a mile away and go into a rage, my Kelpie would fly off the handle “only” if another dog made eye contact with him – a sort of Travis Bickle “You lookin at ME?” response. Managing him around other dogs was a chore for all 13 years of his life (especially because I didn’t know training techniques for improving such behavior then that I know about now).

Another thing that I didn’t know then is that interactions with “normal” dogs who respond with “normal” canine behavior are required in order to transform a normal puppy into a well-behaved dog, capable of polite “conversation” with other dogs. I’m incredibly grateful to have good friends with good dogs in my social circle, and glad that Cole is reaping the rewards of these relationships, too.