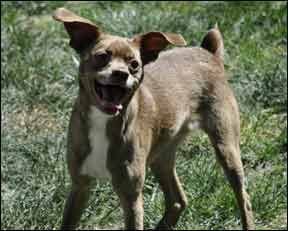 So, the weekend of May 5-6 is the annual Adoptathon, organized by the North Shore Animal League. Participating shelters open for the whole weekend, or offer extended hours, and some reduce their adoption fees or have other strategies meant to maximize adoptions.

At my local shelter, I’ve been doing my part this week by spending a few minutes every day with Mickey, doing a little basic training in hopes of finding him a forever home this weekend. Mickey is less than a year old, and cute in an ugly sort of way, or ugly in a cute way, I’m not sure which. We’ve been calling him a Chihuahua/Pug-mix, but really, there’s no telling what’s in there. He’s got impossibly long legs, and a cropped tail, and his color is kind of a muddy grey, or mouse brown. And he’s got too much energy, and NO training whatsoever. He has also spent more of his life in our local shelter than he’s spent out of it.

The first time Mickey ended up in our shelter, at the age of about 4 months, it took five months to find someone to adopt him. That family kept him for two months, and then returned him, saying their older dog was picking on him. It’s possible, but I tend to think that it had more to do with the fact that he’s a super energetic guy with absolutely no manners whatsoever. He jumps up, he spins and pulls and twirls on leash, and it’s almost impossible to walk with him without tripping over him as he leaps about and crosses your path every second or two.

I had spent just a little time with Mickey the first time he was in the shelter. I’d turn him out with other dogs to play, but never really worked on his manners. It’s easier for the little dogs with bad manners to get adopted than it is for the bigger dogs, so when I have time to train at the shelter, I tend to spend it with the big guys. But seeing Mickey come back to us felt awful. I don’t want for him to be with us for months and months again – and besides, he’s a sweet and affectionate little guy, and he gets along well with any other dog he’s kenneled with.

So I’ve taught Mickey to sit. It sounds pathetic, but it took me about a half hour to get the first sit. He’s like a little jumping jack, accustomed to jumping up for attention, but with the quick movements and attention span of a little bird. He finally “got it” when, out of desperation, I put him onto a chair (one with arms) to try to limit the number of directions he could move away from me. Given only one promising direction to look, he finally focused on the treat lure I was using and sat down on the chair. Yes! And treat, treat, treat. A little jackpot finally got him to focus his attention on me. It only took a minute or two after that first sit for him to figure out that sitting resulted in a treat being shoved in his mouth. Within another minute or two, he was offering sits on the ground, and within a few more minutes, I could get him to sit on cue inside the kennels, on a bench in the lobby, and anywhere else I asked.

I’ve stopped by every night for almost a week, just before closing, to practice and lengthen that sit. We’ve made some progress with his attention span – holding that sit for about 30 seconds or so before I give him the treat – and walking on the leash (on one side of me, not spinning and crossing). I hope, I pray that these things will find him a home this weekend, and will be enough to encourage his next adopter to keep him! There’s a nice brain in that goofy little package! And enough energy to light a whole neighborhood! Or at least, compete in some fast-paced canine sport! Wish us luck!