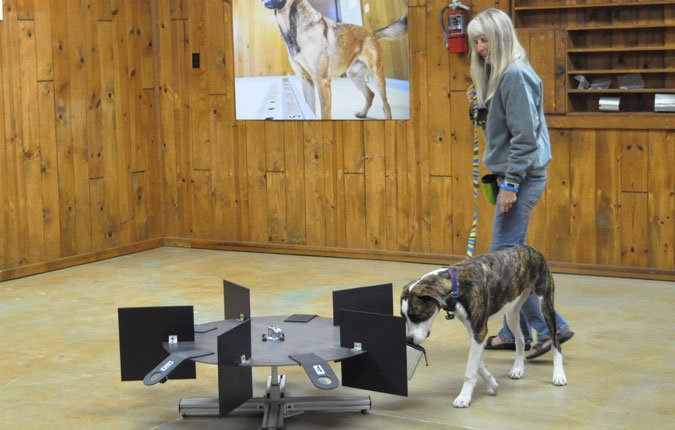 Recently, a trainer friend asked me if I would be interested in volunteering my adolescent dog, Woody, to be a participant in some sort of nose work workshop. My friend was asking on behalf of another trainer she knew, and she vouched for her friend, saying that Woody would have a good time and that she thought it would be interesting for me. I didn’t have time to get the details on what the workshop was, but quickly I agreed to the date – a week away, on a day when I would have ample time.

It could not have been more fascinating.

I attended just a few hours that one day, which was part of a six-day certification program for people who were learning how to teach dogs to detect cancer in noninvasive medical samples: blood, urine, and breath.

The course is taught by Dina Zaphiris, founder and CEO of the In Situ Foundation, a 501(c)3, dedicated to training dogs to detect early stage cancer in humans for more than 12 years. The students who were attending the course included medical researchers with a special interest in the ability of dogs to do this work, as well as dog trainers who have a special interest in cancer detection. (Indeed, the first person I asked, “What brought you here?” said that she was a dog trainer who had lost her mother to cancer, and she was interested in anything that could help people detect and treat cancer earlier.)

The students were having a lunch break when I arrived, so I was able to ask a few questions before turning over Woody’s leash to a student. I was happy to see him trot happily off with the student (and her treat bag), to be crated until it was his turn to participate in the training.

Dina apologized to myself and the other owner who had volunteered her adolescent Australian Shepherd for the afternoon’s session, saying that while she’d be happy to answer quick questions, she would be able to explain things in more depth later; the training was for the benefit of the paid participants, who were on their fourth day of the six-day workshop. For me, it was like sitting down in a Ph.D. level course on a topic that always fascinated you, but that you realized you knew little about.

The first thing that I witnessed was one of Dina’s already trained dogs, Stewie, a six-year-old Aussie who has been trained to detect early stage lung, ovarian, and breast cancer, being handled by students in the course. At this point in the workshop, the students had already seen this work; they were now practicing the physical and organization skills necessary to prepare the samples that the dog would be scrutinizing – in this case, a blood sample from a person with breast cancer, as well as “decoy” blood samples from people who had benign tumors – and arranging them in a device used to present them to the detection dog, and bringing Stewie to the testing area. Dina was coaching the students through the process; there are clearly a thousand small details that you have to get just right in order to make certain that the samples are not mixed up or handled in such a way as to either confuse or “tip off” the dog, and that the trained dog is being presented with the various samples in a completely neutral way.

Stewie was released to the device, which had six openings where samples could be placed, and in this case, held one sample with cancer and two samples with benign tumors. It took her less than 10 seconds to sniff all six holes, sniff the one with the cancer sample more deeply, and then signal the “alert” by sitting emphatically down in front of that sample. Boom.

Then she did it about six times again, with different people handling her and moving the position of the samples.

Then it was time for Woody. In addition to learning how to handle experienced, trained detection dogs, Dina was showing the students how to start teaching a completely inexperienced dog how to detect certain scents and alert their handlers when they have detected a scent. Dina explained that if one was actually training the dog (as opposed to demonstrating the various steps), one would practice the steps over many days with many repetitions.

She started by feeding Woody a treat or two, and then tossed one, saying “Find it!” He’s played this game before, and he readily chased after the treat, and then returned to her for more. Once a dog solidly knew the “Find it!” cue, she explained, she’d move on to hiding treats. She loaded a jar with food treats, and loaded the jar into a different apparatus than the one Stewie worked with; the one resembled a merry-go-round, with six places for various scents. She walked Woody on a loose leash by the apparatus, telling him, “Find it!” Since he had just been snacking on the same sort of treat, when he walked by the section of the merry-go-round where treats were hidden, he did sort of a double-take. He had easily smelled the treats, and while he had almost walked right by them, he followed his nose and turned back to sniff the part of the apparatus where the treats were located. When he sniffed that section, Dina clicked a clicker and quickly placed a treat on that section for him to eat. Yay!

Dina spun the merry go round, and they walked around it again. Now that Woody knew there were treats in it for him, he walked around sniffing each section of the apparatus, and quickly found the section where the jar of treats was located. He gave that section a big sniff, and when he did so, Dina clicked the clicker and gave him a treat. Boom. Then she handed his leash to a student, who replicated the exercise, and then another student. They also introduced him to two different types of sample-holders, and used the chance to play with a tennis ball as the reward for sniffing out the treats.

Now, I know that dogs have great noses, and that they can smell far more than we can. And this treat-finding exercise was a super simple introduction to nose work. But I couldn’t help but feel a little like I had just found out that my second grader could play the piano without ever having had a lesson. I was also super proud of the fact that Woody was so comfortable and happy being handled by strangers, in a room full of strangers, with barking dogs in the background (other dogs were crated, waiting for their turns).

I was fascinated by the little I saw of this program, and plan to go back and interview Dina Zaphiris soon, for an article about her work with cancer detection dogs. Who knows? Maybe Woody and I will pursue further training in this area. After the loss of my brother almost two years ago, to a cancer that was only detected when it was a fast-moving, deadly stage 4 (he lived only 8 months after diagnosis), I have a grudge against this horrible disease, and I’d love to participate in any sort of research that could speed up detection.

Stray Dogs Living On The Streets

Are more “pandemic dogs” being returned to shelters?