One of my friends posted on Facebook the other day, “What works best for skunk spray? Pepper got skunked right before we were leaving for work!” (She gets to bring her dog to work – usually!)

I immediately responded: “Don’t wash her!” And my friend responded just as quickly, “Too late! Why?”

I guess a blog is a good place to be repetitive. We’ve covered this in WDJ and maybe on the blog before, but I guess one can’t say it enough:

If your dog gets hit with skunk spray, DO NOT wash him with water (or tomato juice or anything else). Get thee to a bottle of hydrogen peroxide! And box of baking soda!

Chemist Paul Krebaum gets the credit for applying his chemistry knowledge to the age-old need for a substance that can neutralize the smell of skunk spray. He researched the putrid oil (which skunks can shoot out of special glands under their tails as a potent defense mechanism) and determined that the chemical responsible for the distinctive odor was in a class called thiols. The human nose is extremely sensitive to these organosulfur compounds, and can detect them at 10 parts per billion. But if you subject the substance to just the right compound, you can inactivate the chemicals responsible for the odor, as fast as a chemical reaction can occur.

Krebaum came up with a formula – a quart of 3% hydrogen peroxide and a ¼ cup of baking soda – that would alter the thiols in skunk spray and render them odorless. He recommends using fresh peroxide (not an old bottle that’s been open for years). Stir together in a bucket or large bowl – NOT a bottle, as the mixture will bubble and produce gas bubbles (which could cause a plastic bottle to explode). A teaspoon or two of dishwashing liquid (such as Dawn) is added to make it easier to distribute the mix evenly through the dog’s hair.

He recommends you wet the dog thoroughly with the mixture, down to the skin. Be careful not to get any in your dog’s eyes (or cuts) however; it stings! I’ve used a sponge before to thoroughly wet my dog’s face without getting it in his eyes. (You can also put a sterile lubricant eye ointment – such as Artificial Tears — in your dog’s eyes first, which will help protect them from being stung by any of the mixture.)

After the dog is thoroughly wet, you shouldn’t be able to smell the skunk spray any more. If you can still smell it, you haven’t gotten every bit of the skunk oil wet with the mixture. Once the odor is neutralized, rinse the mixture off. I usually follow this rinse with a regular shampoo bath; even though you can’t smell the skunk spray any more, it’s still oily and a shampoo will help get it off the dog’s fur.

If you FIRST washed the dog with water (or tomato juice, or some other home remedy), sorry, this approach won’t be as effective as it could be. Water also affects the thiols, making the stinky substance resistant to being chemically neutralized.

I’m sure I’m butchering the language of chemistry in trying to explain this. For a technically correct chemistry lesson on how this mixture works, see Paul Krebaum’s website: http://home.earthlink.net/~skunkremedy/home/sk00003.htm

And for the basic recipe and directions from Mr. Krebaum, see his FAQ page: http://home.earthlink.net/~skunkremedy/home/sk00001.htm 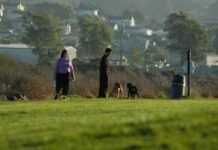 Nancy Kerns 44
Say you are in a grocery store with your best friend and her child, and you both see the child take something, perhaps a...