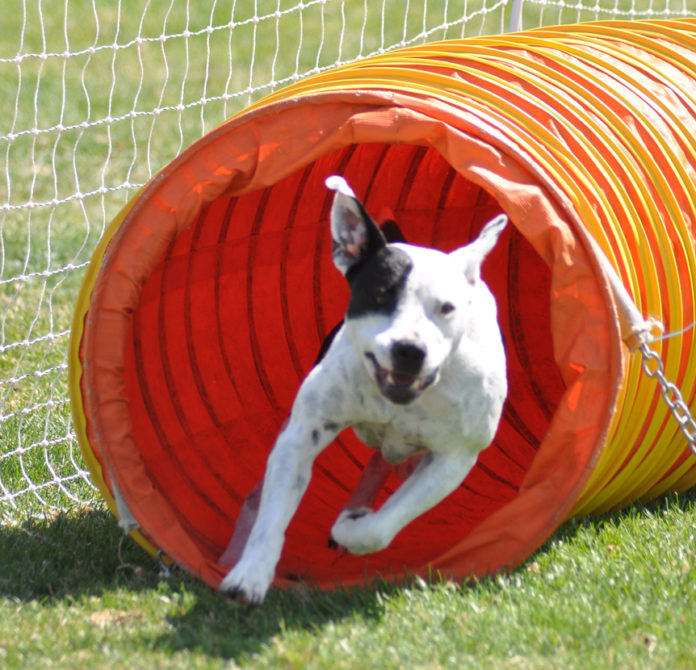 A week ago, I attended my first agility competition – just as a spectator. It made me immediately wish I had kept up with my agility lessons with Otto. I want to get back to it! I have to try my hand at this sport.

I had an excuse for quitting – several, actually. The trainer I was taking group lessons from suddenly moved far away, and I didn’t know anyone else locally who either had agility equipment or was offering group classes. And family matters prevented me from having enough spare time to drive much farther than I already had been in search of a replacement class.

But Otto LOVED going to class and jumping over things and running through things. He thought it was a blast and so did I.

Within 10 minutes of watching a fairly advanced class at the event I attended, I had burst out laughing (with utter delight at watching a fantastic dog/handler team) and burst into tears (at the end of the same run, to witness the joy and pride and connection between that dog and handler). Okay, yes, I’m a total and utter sap, but emotions are part of what I love about dog/human relations.

It’s breathtaking to see a fast accurate agility run, and heartwarming to see a slower, accurate one where the dog checks in constantly with his handler and seems to be having a good (even if not great) time. And it always saddens me to see a dog go unacknowledged at the exit of the ring after a run in which he made mistakes. Maybe the handler doesn’t want to “reward” a run in which the took the wrong obstacle but if he got 95 percent of the other obstacles right, isn’t it a little dampening to his enthusiasm if he gets zero affection/patting/play or even eye contact at the end? I’m a TOTAL amateur at this sport, but instinctively, I feel there is often a connection between the dog not paying strict attention to his or her handler and the handler’s visible, palpable disappointment and unhappiness at the end of a poor or even mediocre run.

It’s a thrill to see the Border Collies and Aussies and Jack Russell Terriers and Belgian Tervurens flying around the course . . . but no less thrilling to see pit-mixes and Pomeranians and Rotties and who-knows-whats do so, too.

I should also say that while I saw lots of fit, gorgeous human athletes tooling around the courses, I alsosaw plenty of people far older and far more out of shape than I am jogging with their dogs to pick up ribbons. Being middle-aged and middle-sized is no excuse to stop my exploration of this sport.

I still have a lot going on in my family. I’m spending most of my spare time supporting one wing of my family, people who are in recovery from drug and alcohol addiction, and the rest supporting another close family member in a serious battle with cancer. But darn it, the time I spend working with and enjoying Otto is what helps fill me up, so I have more to give. I’m tracking down another agility class today.