The other day, I was working away on my computer, both dogs snoozing in my office while my Spotify playlist blared from the computer speakers. Suddenly, the music cut out – an interruption in my rural internet service or something – and it’s a good thing it did, for in those few moments of silence, I heard something that stops most of us dog owners in our tracks: the unmistakable sound of a dog’s repetitive licking that signals trouble.

“Hey!” I exclaimed, jumping up from my computer chair to see which dog was licking, and where. I clearly woke up Woody – it wasn’t him. But Otto, who had been laying in a door-less crate in my office, hung his head with a “Shoot! Caught in the act!” look. I asked him to come out of his crate for a quick exam.

He stepped out and the problem was immediately apparent: He had been licking a big raw spot on his hip – a spot that had not been there earlier in the day.

I asked Otto to lay down in the middle of my office floor and checked his tummy for fleas. In my experience, if a dog has fleas, you will see them running across the hairless or sparsely haired tummy first. On Otto: Nothing. I grabbed a flea comb and started combing. Flea combs have tiny teeth, packed very close together. You can work quickly to examine a thin-coated dog with one. But scruffy Otto has a fine undercoat, and flea combs pull a lot of loose hair out. I had to examine each comb-full of hair closely – I had to get my reading glasses to do so! – to make sure I spotted any flea or “flea dirt” (flea feces).

After about 20 minutes of combing, I found a single flea. Oh my lord, Otto.

My “heart dog” of yore, Rupert the Border Collie, had been severely allergic to flea bites, and if he was ever bitten by one, this is exactly what would happen: Within hours, he’d transform from a “regular” dog to anxious, neurotic, obsessed, and compulsive. He’d go crazy with scratching and chewing himself, as I raced to get him whatever was needed to stop his itching: something to nuke the fleas, something to stop the itching, something to calm him down.

Otto has not, for most of his life, been that sensitive. Since I foster fairly frequently, we’ve had the occasional flea incursion that had to be put down quickly. In instances of a transient flea invasion, Otto would get only mildly itchy. He’s never been covered with fleas, but, once or twice, we’d had a mild population boom. (I used to have a couch on a covered porch and the dogs liked laying on it. So did a neighborhood cat. Boom – all of a sudden, the couch was a flea farm. It went to the dump shortly afterward.) At 13 years old, though, Otto’s immune system seems to be twitchy.

Using an old pair of horse’s ear clippers I have, I clipped the hair surrounding the hotspot; when the hair touches skin that’s abraded and open, it constantly introduces bacteria to the site. Shaving the surrounding hair makes it look awful, but heal more quickly.

Next, I gently cleaned the site with a mild liquid antibacterial soap, and rinsed it well. Next, I dried the area all around with a clean towel, and used a hair dryer on “cool” to dry the hotspot itself. Finally, I used a favorite remedy, EMT Gel, to lightly coat the wound. We discussed this gel in an October 2013 article, “Alternative Treatment and Supplement Recommendations,” where author CJ Puotinen described it this way:

I also have been giving Otto a dose of Benadryl in the morning and at night, to help stop his allergic itching.

Next, I flea-combed Woody; I didn’t find a single flea on him. If fine-coated Coco had a flea on her, I would have seen it walk by; no combing necessary. I’m hopeful that the flea came onto our property on a passing cat or squirrel or something. Nevertheless, I also made an immediate trip to Petco and bought fresh Seresto collars for the dogs. Since fleas aren’t usually a problem for us, I don’t use flea-pesticides year-round, but do use the Seresto collars when we hike in the local areas that are laden with ticks.

As long as Coco is here, Woody’s Seresto collar will have to go on at night and off during most of the day; Coco and Woody chew on each other constantly in play, and I neither want her to get her mouth stuck on his collar or, for a $50 collar, have her chew it off of him (this happened once when I was fostering Odin, another young dog who liked to playfully bite and chew on Woody’s neck and face. $50, down the tubes!).

Fortunately, just a day or two later, the hotspot is healing nicely, and Otto’s licking has ceased. I’m hoping that any other fleas that might have been present were killed before they could have an opportunity to lay eggs. I’ll keep the flea-killing collars on for a few weeks, just in case.

Do you have a highly flea-allergic dog? How do you treat hotspots? 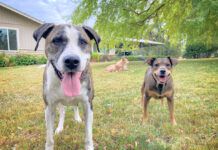