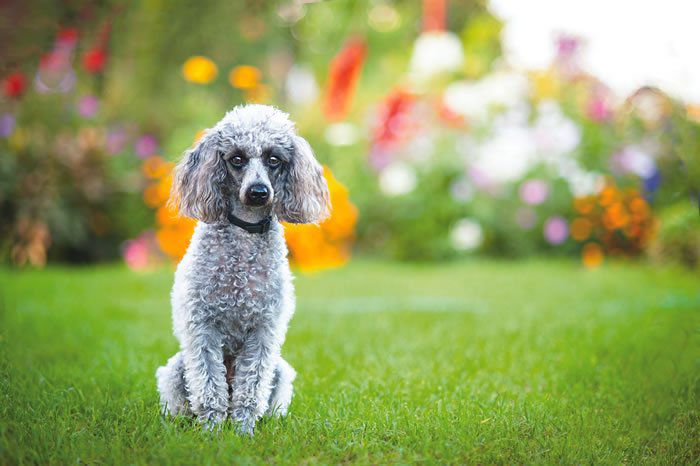 One of the most irritating – and common – phone calls I receive in my capacity as a professional dog trainer is when dog owners urgently ask me to help solve their dog’s behavior problem immediately – even though, as it often turns out, the problem has actually existed for years. Sometimes, it’s even phrased as, “If we can’t get this fixed now, we’re getting rid of the dog; we just can’t take it anymore.”

But it’s important that I not allow my irritation to show, because frequently, despite the fact that the problem took months or even years to develop, the people really are on the verge of giving up on the dog. Sometimes, whatever has been going on with the dog has tipped the scales significantly enough to prompt the client to ask for help right then and there. I want to harness that motivation! I want to seize that moment and get everyone working together on a solution, finally.

I received such a call on a Saturday afternoon from an exasperated woman whose 4-year-old miniature Poodle had a housetraining issue. The dog had never been successfully housetrained, she said, and now she and her husband were desperate.

They wanted this problem solved now, immediately. “You have to help us!” On learning how long the problem had existed, I asked what compelled them to seek help at this time.  “It’s gross,” she said. “It has to stop.”

People don’t generally book a behavior consultation because they suddenly consider their dog’s behavior gross after tolerating it for four years. I prodded a bit more. “Well, nothing’s worked. We must be doing something wrong!” Aha! It made me very happy that she hadn’t put the blame on the dog and that she appeared to recognize that there was something she and her husband should be doing differently. I figured I would get more details when I got there, and I booked them for that evening. Yes, it was a Saturday evening, but I kept thinking of all the fabulous training and practice opportunities they would get the very next day, Sunday, when they were both home all day. The timing was perfect.

I kept in mind that addressing a long-existing housetraining issue can be tricky, and it’s stressful for everyone involved, for a number of reasons, including:

– The humans are at the end of their rope (even though they’ve let it go on for several years).

– The dog is stressed because everyone seems to be so angry with her all the time.

– The humans are about to learn that the problem won’t be fixed overnight, and that they’ll have to significantly change their routine in order to make any progress.

– The dog is about to have the only toilet facilities she’s ever known, taken away from her . . . just try to imagine how confusing that must be, for anyone!

At the clients’ house, I was greeted at the door by a very enthusiastic, friendly little female poodle named “Silly.” I learned that the couple mostly worked on opposing shifts, and, to make matters more complicated, their schedules were unpredictable and irregular. This meant that a routine was difficult for them to stick to, and also explained why it was important that we meet “right now,” as it was one of the rare times they were both at home.

We quickly ruled out any medical issues as a potential cause for Silly’s “accidents,” as she had very recently  received a clean bill of health from her veterinarian at an annual health visit.

My attention was drawn to a couple of training “puppy” pads on the floor – one in the kitchen and another in the bathroom. I asked if Silly had ever been trained to use the pads; the answer was “Yes, sometimes she uses them.” Sometimes means that the answer was actually no; she had never been trained specifically to use the pads – she just managed to hit them sometimes when she eliminated in the spots in the house that she preferred for elimination.

I asked if they had ever attempted to train her to relieve herself outside. They said, “Not really, but sometimes if we’re outside, she’ll go potty there and she knows we’re happy about it.” Again, I surmised that no formal training had actually taken place.

I also learned that the husband had, on several occasions and on the advice of several well-meaning friends, resorted to spanking Silly if she was caught in the act of relieving herself in a location other than on the pad. He had also “rubbed her nose in it” if a mess was discovered after the fact. As a result, Silly now only relieved herself in a corner of the basement when no humans were around, or in the living room during the night when everyone was asleep.

The owners also mentioned that Silly was free-fed, and while she used to nibble throughout the day, she now ate and drank only after the owners had gone to bed. They said she often emptied her water bowl completely during this time.

We began by removing the training pads and establishing scheduled feeding times, in order to promote regular digestion and elimination.

We also devised a plan that would allow Silly the opportunity to go outside every 30 minutes for the next several days, always accompanied by someone who could reward her immediately if she relieved herself outside. This plan might prove difficult for some owners, but I learned that the owners’ next-door neighbors (in a duplex) were actually the husband’s parents, fond of Silly, retired, and readily available. I quickly recruited them to help handle this task.

Silly is not crate-trained and is not comfortable being confined, so we established a large area in the kitchen that could be closed off, where she could be left alone for short periods between visits from the parents. When the owners were home, she was to be either actively supervised or tethered to them at all times. They were to continue the frequent visits outside, with the intention of gradually stretching the time between outdoor trips as Silly became more successful with her outdoor potty breaks.

I explained to Silly’s owners that punishing her, whether in the act of eliminating in the house or upon finding evidence of a previous “accident” indoors, would discourage Silly from eliminating in front of them. In order to help Silly feel comfortable eliminating – outside! – the owners agreed to stop punishing her for any “mistakes” that she made.

During my visit, I took several opportunities to step into the backyard with Silly on a long leash and was lucky enough to be able to reward her – not once, but twice! – for relieving herself outside. When asked if they were up for the task of doing this all day on Sunday, with the aim of creating opportunities to reward Silly outside, both owners were extremely enthusiastic.

After one week, with the help of the parents and the urgent commitment of the owners, Silly had slipped up only once during the day when left alone for longer than planned and not confined to the kitchen area. And now that she was routinely praised and rewarded for eliminating outdoors, she also began scratching at the back door when she wanted to go outside!

The couple is now optimistic that their problem will finally be resolved. Best of all, the relationship between themselves and their darling little dog – a relationship that had been damaged by the punishment and mutual distrust – is well on its way to being repaired.

President John F. Kennedy once noted that when written in Chinese, the word “crisis” is composed of two characters, one that represents danger and one that represents opportunity. Perhaps that’s what Chicago mayor Rahm Emanuel had in mind when he was more recently quoted as saying that one should “never let a serious crisis go to waste,” because  “it’s an opportunity to do things you think you could not do before.”

Even life-threatening crises, such as when an owner considers surrendering or even euthanizing his dog due to serious behavior problems, can be seen as an opportunity for a trainer  – or even just a friend with a better dog education or more dog experience –  to help encourage and redirect the owner toward a smarter and more positive solution.

Not all conversations that begin with “You need to fix this right now!” grow into easy success stories like this one, and yet I can’t help but think that my having responded immediately, while the iron was hot, had a lot to do with fueling – and reinforcing! – the couple’s determination to address their problem in a new and better way.

Nancy Tucker, CPDT-KA, is a full-time trainer, behavior consultant, and seminar presenter in Quebec, Canada.  She has written numerous articles on dog behavior for Quebec publications focusing on life with the imperfect family dog.