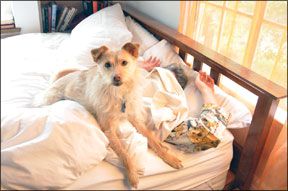 Those last few minutes of sleep before the alarm goes off are a treasured sanctuary where we hide in dreams before the reality of the world intrudes. Few dog owners appreciate it when their dog wakes up too early, robbing them of those golden moments. But some dogs seem to have an uncanny knack for anticipating the alarm by 15 or 20 minutes, and manage to routinely do just that.

Of course, puppy owners expect to be awakened by their baby dogs – or they should. It’s unreasonable to think a young puppy can make it through the night without a potty break. Crated or otherwise appropriately confined, even an eight-week-old puppy will normally cry when his bowels and bladder need emptying, rather than soil his own bed. When this happens you must get up and take your pup out to empty his bladder and bowels, and then immediately return him to his crate so he doesn’t learn to wake you up for a wee-hours play or cuddle session.

Adult dogs, however, barring a health problem, should wait for you to get up rather than pushing back your wake-up time in eager anticipation of breakfast, or other morning activities. If your grown-up dog has made it his mission to make sure you’re never late for work (or breakfast) by waking you up every morning before your alarm does, try this:

Make sure your dog doesn’t have a legitimate reason for getting up early. If he has a urinary tract infection or digestive upset, or some other medical issue that affects his elimination habits or otherwise makes him uncomfortable, he may have  to go out 30 minutes (or more!) before you normally get up to let him out.

2) If your dog wakes up too early, tire him out the night before.

A tired dog is a well-behaved happy dog and  a late sleeper. Exercise uses up much of the energy that he presently can’t wait to wake you up with – and also releases endorphins, which regulate mood, producing a feeling of well-being. Tiredness promotes sleeping in, and endorphins help reduce anxieties that may play a role in his early-bird activities.

Increase the time between your dog’s last meal and his last bathroom opportunity to minimize the chance that he’s waking you up because he really has to go. It only takes a few “I really have to go” mornings to set an early-riser routine, especially when rising is reinforced with, “Well, we’re up now, no point in going back to bed . . . here’s your breakfast!” Don’t forget that high-quality diets are more digestible, which reduces fecal output, which reduces early-morning urgency.

4) Reduce stimuli in the bedroom.

The less there is to awaken your dog, the less likely he is to awaken you. Close the drapes. Turn off the television. Turn on a white noise machine or soft classical music. Cover his crate. He is crated, isn’t he? If not, restricting his movement is a simple way of preventing him from pouncing on you at 5:30 am. If he doesn’t crate well, perhaps you can use an exercise pen, or a baby gate to keep him in the bathroom next to your bedroom.

5) If your dog wakes up too early, train him to sleep in.

If these management solutions alone don’t work, you may be able to train him to sleep later. If your normal wake-up time is 6:30 am and he consistently wakes you at 6:15, for one week set your alarm for 6:05. For the second week, set it for 6:10. Do not get up before the alarm goes off (unless you’re pretty sure he has an urgency problem)! This will condition him to the sound of the alarm as his cue to wake up. Each week set the alarm forward five more minutes until you’re at your desired wake-up time. It might take you a few weeks to get there, but it’s gloriously simple, and it works. Unless you have young children who starting running through the house at 5:00 am, or garbage trucks start rumbling and banging down your street every morning at 5:30 – in which case all bets are off!

Read Next: Should Your Dog Sleep on the Bed with You?