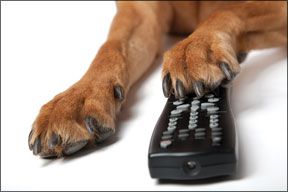 Our Corgi, Lucy, barks at the television. Not only does she bark at dogs, she may also bark at horses, giraffes, cartoon hippopotami, and any other animal or ersatz animal, as well as menacing human figures. It’s at least a little annoying, if not irritating. Given her herding-dog Type-A control-freak personality she may always be somewhat prone to respond to television stimuli, but we’ve made a lot of progress using several of these tactics:

1. Put your dog in a covered crate or in another room.

If your dog’s TV triggers are specific and visual-only, just blocking his view of the television can keep him calm and allow you to watch Victoria Stillwell’s “It’s Me or the Dog” training show without interruption from your canine pal.

Note: If you watch a lot of Animal Planet and National Geographic and your dog alerts to lions and tigers and bears (oh my!) as well as other canines, this might be too much separation during a prime bonding time of the day.

Simply lowering the volume to a level where you – and no doubt your dog – can still hear it but it’s not as overwhelming to him, can sometimes forestall a bark-fest. As long as you can keep the volume below your dog’s reaction threshold and still hear the television yourself, you can watch in peace.

If it’s mostly auditory stimuli that get your dog going, you can use headphones to listen to your favorite dog-arousing shows.

If you have a large family, you’ll have to be more electronically adept than me to figure out how to get everyone plugged in. If your dog is also visually aroused, just tuning out the sound won’t be enough.

4. Cover your dog’s eyes and ears.

I’m not joking! If we’re watching a show and an animal comes on briefly that starts to set Lucy off, I can gently place my hand over her eyes until the offender is off-screen. She doesn’t object, and it keeps the peace.

Another option for more thorough ear covering is Mutt Muffs. Yes, these are ear muffs for dogs! They were originally designed to protect the hearing of dogs flying in small planes. They are available here.

Doggles (sunglasses for dogs) can be used to help reduce your dog’s visual stimuli. Find a local retailer by checking doggles.com or calling (866) 364-4537.

Television reactivity is a golden opportunity crying out for counter-conditioning and desensitization, to give your dog a new association with and response to the stimuli on your big screen. It’s a simple training procedure that still allows you to be a couch potato yourself!

Just arm yourself with a Tupperware container of high-value treats cut into pea-sized pieces and turn on your favorite dog program or doggie DVD. Try this first with the television set at normal volume, but be prepared to turn it down if necessary.

Sit on the sofa with your dog on leash at your feet, or on the cushion next to you, if that’s his normal hang-out spot. The instant he notices Dogzilla (or some other threatening on-screen entity) begin feeding him tidbits, one after the other, using the treat to draw his head toward you. Ideally, begin feeding before he has a chance to bark. If you miss that moment and he barks, feed him anyway. If he’s too aroused to eat your high value treats, decrease the intensity of stimulus by reducing volume or moving farther away from the television, or by using one of the tools in tactic #4.

After feeding a few treats, pause, let your dog look back at the screen, then feed him again. Continue doing this until the bark-inducing figure has left the screen. Then sit back and wait for the next opportunity. (Don’t forget to subtract calories from his dinner bowl roughly equivalent to the calories you feed during TV training.)

If you do this consistently, you’ll see your dog begin to glance at you for treats when a dog comes on the screen rather than going into arousal mode. When your dog consistently associates the dogs on TV with “Yay, treats!” you can gradually wean him off the high-value, high-rate delivery and move to an occasional bit of cookie to keep the association strong.