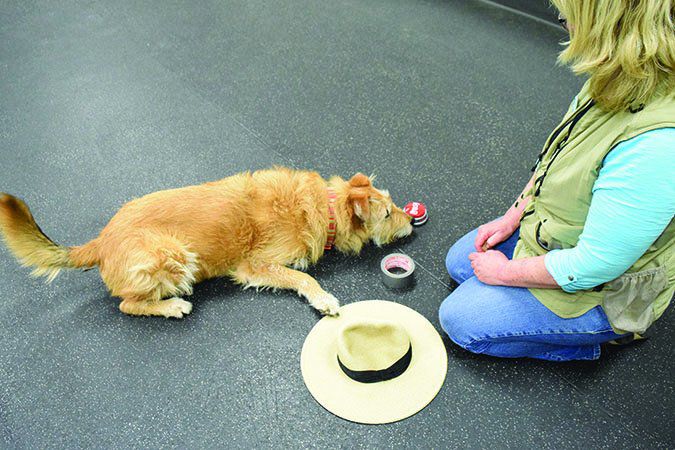 Teaching your dog to differentiate between objects is a fun brain game that can be stretched out over days or weeks. He doesn’t need to learn it all on the first try! Keep sessions short and fun, making sure your dog gets plenty of reinforcement to keep him interested.

1. Prepare a few objects in advance.

If you think using toys will get your dog too excited, pick some items that mean nothing to him, like maybe a strainer, a paperweight, and a flashlight (I’ve randomly chosen these items simply by looking around my kitchen and picking things my dog has never interacted with). Choose items that would be difficult for him to put in his mouth if you want to avoid inadvertently triggering a game of chase. Larger items can easily be targeted with his nose.

Get into position. Have your dog sit or lie down and then sit on the floor facing him.

3. Start by having your dog target one item.

Place one of the items on the floor in front of him, close enough that he can reach it with his snout. The instant he leans towards it to sniff it, click or say “Yes!” and give him a treat. Deliver the treat away from the object, but close enough to your dog so he doesn’t need to stand up. When he’s done eating the treat he will probably turn his head back toward the object to check it out again. Click or say “Yes!” and reward him again.

4. Give the first item a name.

When your dog reliably targets the item with his nose, give that item a name. Say the name just as he’s leaning toward it. For example, say “Strainer” just before he touches the strainer with his nose. Mark and reward. Repeat this several times so that he gets to hear the word “Strainer” often. We want him to begin to associate the word with the object.

5. Have your dog target a second object (but don’t name it yet).

After many repetitions of saying the name of the object and marking/rewarding your dog for touching the object with his nose, it’s time to bring in a second object. You will now have both the strainer and the new object on the floor in front of your dog. He will likely explore the new object with his nose. Ignore that; don’t mark and treat. Say “Strainer” (or the name of the original object), give your dog a moment to think about it, and mark/treat for touching the first object.

If your dog is able to comfortably and safely take a few steps, move the two objects to a new location, even if it’s just a few feet away from where you were a moment ago. Place the objects about two or three feet apart and cue your dog to “Go touch the strainer.” Mark and reward if he gets it right!

6. Add another item to target.

Increase the level of difficulty by adding a third item, but continue to ask your dog to identify and target the first object.

7. Name additional items as you include them in your targeting exercise.

To name another item, start the process over again with only the new item to be named in front of your dog. Refer back to #4; say the name of this new object just before he touches it, mark and reward when he does. Repeat several times so he associates this object with its name (for example, “flashlight”). With practice, you’ll be able to place more than one named item on the floor and ask your dog to touch each object by name (“touch the strainer”). Mark and reward when he gets it right! Learning to discriminate between items by name can take time and lots of repetition. Enjoy the process – there’s no hurry! 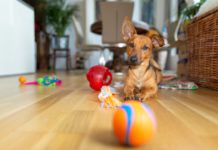 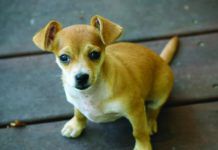 Teach Your Dog to Choose Things