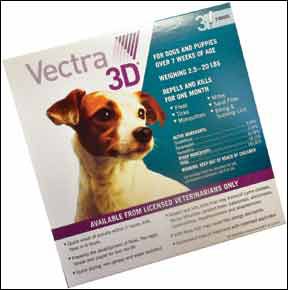 Lately, it seems like new flea and tick control products have been popping up left and right. I suspect this is due to some of the original patents running out. When a patent expires, other companies can create generic versions of the same product, usually for less money. This inspires the original companies to create new products that they can patent anew. In some cases, new products are introduced because fleas and ticks may be developing resistance to the older products, lowering their efficacy. Most new products, including all those introduced this year, are just new combinations of older ingredients. Here’s a rundown on these new options.

Bayer introduced Advantage II and K9 Advantix II in January 2011. The added ingredient in these new topical products is pyriproxyfen (Nylar), an insect growth regulator that inhibits the development of eggs and larvae, helping to break the flea life cycle. Other insect growth regulators used in flea control products include lufenuron (Program and Sentinel) and S-methoprene (see Certifect below). Pyriproxyfen was used in Bio Spot flea control products in the past, but was replaced with S-methoprene around 2007. These new products are also marketed under the name Advantage Plus and K9 Advantix Plus. Pyriproxyfen is also used on cats.

Other ingredients in Advantage products include imidacloprid, used to control fleas, and permethrin (K9 Advantix only), used to kill ticks. Permethrin is highly toxic to cats, and products containing permethrin are unsafe to use on dogs in households that include cats, particularly if the dog and cat share sleeping areas or the cat grooms the dog.

As with many flea and tick control ingredients, permethrin may also be more likely to cause problems for small dogs, according to the EPA’s Review of 2008 Incident Reports for Pet Spot-on Pesticides. Shih Tzu, Bichon Frise, Chihuahua, Yorkshire Terrier, Maltese, and Pomeranian are breeds that appear to be overrepresented in adverse incidents. Bayer also makes Advantage Multi, which combines imidacloprid with moxidectin for heartworm prevention.

Also in January, Elanco (a division of Eli Lilly) introduced Trifexis, a new oral product that combines spinosad (Comfortis), used to kill fleas, with milbemycin oxime (found in Interceptor and Sentinel), used to prevent heartworm infection and intestinal parasites. Comfortis is a newer flea-control product introduced in November 2007 that appears to be more effective than either Advantage or Frontline (likely due to fleas developing resistance to these older products), but it may also have more side effects, such as vomiting, particularly when the medication is first used. Spinosad should not be combined with the very high doses of ivermectin (Heartgard) or milbemycin oxime (Interceptor) used to treat demodectic mange, as it increases their neurological effects, but should be safe when used along with the normal heartworm preventive dosage found in this new product. Spinosad is not recommended for dogs with seizure disorders.

Unlike most flea and tick control products, Comfortis and Trifexis are administered orally rather than topically, via a pill that is given once a month. Neither product is recommended for dogs weighing less than 5 pounds. Comfortis is not recommended for puppies under the age of 14 weeks, and Trifexis warns that younger puppies may experience a higher rate of vomiting. These products are not approved for cats, but a similar product to Comfortis called Assurity, marketed for cats. Comfortis is also marketed under the name AcuGuard.

In July, Merial introduced Certifect, likely as a result of the patent on their Frontline products expiring. Certifect contains fipronil (the active ingredient in Frontline, used to kill fleas and ticks, and to help control sarcoptic mange) and S-methoprene (Precor, an insect growth regulator also found in Frontline Plus). Certifect adds amitraz, one of the most effective, but also more toxic, methods of tick control. Amitraz is also used in the Preventic tick collar, and in Mitaban, used to treat demodectic mange.

Amitraz should not be used on dogs with diabetes or heart problems, and older amitraz products warn against using them on puppies less than four months of age and very small dogs. Amitraz, a monoamine oxidase inhibitor (MAOI), can also be dangerous when combined with certain other drugs, including antidepressants (such as those used to treat separation anxiety), Anipryl (used for canine cognitive dysfunction and Cushing’s disease), and DL-Phenylalanine (DL PA), used to treat chronic pain in dogs. While Frontline and Frontline Plus are safe to use on cats, Certifect is not, as amitraz is toxic to cats.

The only product using a new ingredient (rather than a new combination of older ingredients) is Vectra, introduced in 2007 and sold only through veterinarians. Vectra products (there are several) all include dinotefuran, a newer insecticide that kills fleas on contact. Vectra also contains the insect growth regulator pyriproxyfen (see Advantage II above), and Vectra 3D adds permethrin to kill ticks (similar to K9 Advantix). Vectra is also sold as FirstShield and SimpleGuard. Vectra products are made by Summit VetPharm, originally a subsidiary of the Hartz Mountain Corp. (Summit was sold to CEVA Animal Health in 2010).

We’d advise caution in using any of these new products. Adding more chemicals and using more toxic ingredients may make these products more effective, but it also increases their potential for adverse effects. In some cases, such as when nothing else is effective for dogs with flea allergies or regular tick exposure, the benefit may be worth the risk, but we wouldn’t recommend switching if what you’re using now is working.

For those who want to try the new generic versions of older products, there are a few things to keep in mind. First, these products may not be identical to the original product. While the active ingredient is the same, other inert ingredients, such as those used to spread topical applications across the body, may differ. The generic product might not be as effective, or might cause problems for your dog that didn’t occur with the original product. Watch for any signs of adverse effects, or of products not working as well, whenever you try anything new.

Be careful where you buy your flea and tick products, particularly online, where many counterfeits are found. Be sure that the seller is trustworthy. One solution is to look for the Veterinary-Verified Internet Pharmacy Practice Sites (Vet-VIPPS) seal of approval (see “When Buying Veterinary Drugs Online, Look for Accredited Sites,” June 2011). – Mary Straus