Holistic veterinarians have long decried the annual vaccination schedule recommended by many conventionally trained veterinarians for all dogs. Many holistic veterinarians suspect that many of the complex ailments that plague our modern dogs – from allergies to digestive problems to aggressive behavior and so on – have their roots in immune system problems brought on by excessive and unnecessary vaccination.

However, many of us are convinced by our veterinarians that our dogs won’t be safe unless they receive these boosters every year. Fortunately, a recent study indicates that most dogs retain humoral antibody protection from past vaccinations for longer than previously thought.

The Journal of American Veterinary Medical Association (JAVMA) will shortly be publishing the results of a research study, conducted by Lisa Twark, DVM, and W. Jean Dodds, DVM, of Hemopet and Antech Diagnostics, that examined the serum antibody titers of 1441 healthy dogs brought to veterinary clinics for routine health checkups and/or revaccination. The titer tests were conducted at a time when most dogs would typically be given annual booster vaccines.

It was the authors’ intention that those results could be used by veterinarians as a guide for advising their clients about the necessity of annual revaccination of dogs against canine parvovirus (CPV) and canine distemper virus (CDV).

The CPV vaccination history was available for 444 dogs, and the CDV vaccination history was available for 433 dogs; the interval between the dogs’ last vaccination and serum antibody measurement ranged from one month to six years, with the majority (60 percent) being between one to two years. Age, breed (purebred or mixed breed), and sex of the dogs were not significantly associated with the adequacy of serum CPV or CDV antibody titers. The authors commented that in the presence of adequate serum antibody titers, there is little reason to introduce unnecessary antigen, adjuvant, and preservative, as well as to increase the risk of adverse events and client costs associated with administering booster vaccines.

Veterinary Pet Insurance Inc., of Anaheim, California, has sold individual pet policies since 1982, but group plans for employers only began to take off in 1999, according to Rebecca Lewis, VPI vice president for marketing and communications. VPI offers a typical indemnity plan, with average premiums of $200 a year and a $40 deductible.

As great as this sounds for employees who can use some help with their dogs’ medical bills, the plans are not without the usual catches. Just as with human health insurance policies, you end up paying quite a bit more if you sign up for a plan that will cover extensive care for serious or long-term medical conditions such as diabetes or cancer treatment. Nevertheless, having an employer’s help with the monthly payments is welcome relief for many dog owners.

A slightly different type of health plan is offered to employers by Pet Assure, of Dover, New Jersey. Described as an “HMO for pets,” the plan lacks a traditional deductible and co-pay structure. Instead, members – or, in this case, the members’ employers – pay a small fee, generally taken as a small monthly payroll deduction and receive a 25 percent discount at network providers. Pet Assure enrolls all pets, regardless of age, infirmity, or species.

New law makes airlines’ animal safety
records available to consumers
On April 5, President Clinton signed a comprehensive aviation bill that carried a provision to require airlines to begin reporting any incidents of animals being lost, injured, or killed during transport. The Department of Transportation (DOT) will begin to tally such incident reports, and make the results available to consumers, as well as notify the United States Department of Agriculture. In addition, the DOT will begin working with air carriers to improve employee training on air transport of animals.

According to the Air Transport Association, more than 500,000 animals are transported each year. The ATA has estimated that perhaps one percent of those animals encounter problems of some level of seriousness. Undoubtedly, that number will rise now that incident reporting is mandatory. Following publication of WDJ’s article on air transportation safety for dogs (“Leaving on a Jet Plane?” March 1999), WDJ received a number of letters from concerned airline employees who warned that flying is often dangerous for dogs.

Adverse effects of arthritis drug
spur changes in labeling, marketing
Each year, the FDA’s Center for Veterinary Medicine compiles and releases information about adverse drug experience (ADE) reports received from veterinarians and consumers. On December 1, 1999, the Center released figures for 1998, which indicated that one medication intended for use on arthritic dogs, Rimadyl (carprofen), was responsible for 39 percent of all the ADE reports made in 1998, “considerably more than that received for other drugs,” according to the CVM.

A recent “Update on rimadyl” released by the Center explained that for any one ADE report, there is no absolute certainty that the suspected drug caused the effect, and that the adverse effects seen in Rimadyl’s ADE reports were “consistent with those expected for NSAIDs (nonsteroidal antiinflammatory drugs)” which typically involve the gastrointestinal system, renal/urinary system, hematopietic (blood) system, neurological system, and the liver. Approximately 13 percent of the 1998 Rimadyl ADE reports involved the death of the dog.

Based on the ADE reports received since Rimadyl was marketed, a number of actions have been taken to update the safety information that veterinarians receive when they purchase the product, so they are well-prepared to discuss the risk and benefits of the drug with dog owners. At the CVM’s request, Pfizer also developed and distributed an information sheet to be given to owners at the time Rimadyl is dispensed. The CVM also insisted on “death” being added to the list of possible adverse reactions that appear on the drug label and in the advertising for the drug (a move that caused Pfizer to pull all of its television ads for the product).

Rimadyl has made a positive change in the lives of many arthritic dogs, but WDJ encourages dog owners to use medications cautiously and to try to use minimal dosages whenever possible. If you give your dog Rimadyl, you should immediately discontinue use of the drug and contact your veterinarian if your dog displays any of the following common adverse reactions:

• loss of appetite or loss of thirst

• unusual pattern of urination, blood in the urine, sweet-smelling urine, an overabundance of urine, urine accidents in the house

• vomiting or flecks of blood in vomit

• jaundice (yellowing of the skin, mucus membranes and whites of the eyes).

Some dog flea-control
products poison cats
If you use “spot-on” flea-control chemicals that contain permethrin on your dog, watch out – you just might end up poisoning your cat.

The American Veterinary Medical Association (AVMA) has reported adverse reactions by cats to concentrated, spot-on flea and tick products that contain permethrin and are intended for dogs. The AVMA has sent a letter to the EPA asking for the requirement that such products include a warning label that alerts pet owners to the dangers of incidental but potentially fatal exposure of the product to cats.

Any cat that has close contact with dogs that have been treated with the products can develop signs of toxicosis, says the AVMA, including seizures, depression, labored breathing, or discoordination.

Your cat can be exposed to enough permethrin to become ill if he and your dog so much as sleep in the same place (and not necessarily at the same time), such as your sofa or bed. 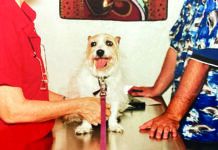