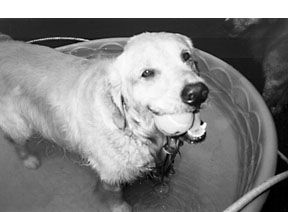 Nancy Strouss lives and works with dogs. As the owner of People Training for Dogs in Valley Cottage, New York, she teaches group and private classes from puppy kindergarten to advanced obedience. Her own Golden Retrievers compete in the show ring, obedience, and agility, and when time permits they visit nursing homes as therapy dogs.

Juniper (Shady Lane Juniper, CDX, NA, TT, CGC) is a spayed 7½-year-old Golden Retriever who has been on a well-balanced raw diet for the past four years, prior to which she ate high-quality kibble and a variety of raw foods. Strouss, the dog’s co-breeder, raised Juniper without heartworm medication or unnecessary vaccinations. “She has been a very healthy dog with minimal need for veterinary care,” says Strouss. “Juniper has had an occasional hot spot, but otherwise, her health has been excellent. Her only regular veterinary appointment is a monthly maintenance adjustment from a veterinary chiropractor.”

“Some of its ingredients, like poultry by-products and beet pulp, are controversial,” says Strouss, “and I have serious questions about foods that contain large quantities of grain. At the same time, this food does not contain chemical preservatives, flavoring agents, or dyes. As a convenience to the store’s customers, I agreed to carry it.”

One day a 40-pound bag of the food broke open while Strouss was moving it. She put the spilled kibble into a container with a tight-fitting lid, but a few days later someone moved the container, the lid came off, and Strouss’s assistant discovered Juniper helping herself to the kibble. Strouss and her assistant weren’t concerned because Juniper hadn’t eaten much, and she seemed fine.

That night after teaching her classes, Strouss took her dogs outside to play ball, after which the dogs, as usual, drank plenty of water. She waited an hour before feeding them dinner.

“My dogs are all good eaters and never miss a meal,” she says, “so I was startled when Juniper refused to touch her food. I remembered the stolen kibble and immediately thought of bloat. Sure enough, her stomach and sides were distended. Of course, it was after hours and no vets in the area are open for emergencies, but fortunately I have a friend, Beverly Cappel, who is a holistic veterinarian. I decided to call her before making the 40-minute trip to the emergency hospital in New Jersey.”

Juniper was in the early stages of bloat and not yet showing the dangerous symptoms of panting, drooling, trying to vomit, or having difficulty lying down. Dr. Cappel suggested that Strouss give Juniper charcoal capsules, walk her for at least 15 minutes, and try to get her to burp.

“I did this right away,” says Strouss. “After a 15-minute walk, Juniper burped a few times and then defecated. I brought her back inside and kept a close eye on her. Her stomach was definitely less distended, and she lay down on a cool part of the floor and fell asleep. Half an hour later, she jumped up onto my bed and fell asleep again.”

The next day, Juniper seemed completely well, but Strouss decided to feed her a very small morning meal, just in case. “Late that afternoon I again noticed the early symptoms of bloating,” she says. “This time it happened during office hours, so I decided to take her across the street to my conventional veterinarian. Her stomach and sides were once again distended, but only slightly. We decided to repeat the charcoal and walk-till-you-burp routine, and again her symptoms disappeared.”

New signs of trouble
Juniper was her happy, healthy self for the next few days. Then Strouss noticed her licking an area on her inner thigh. At first it was a small, inflamed lesion, like a hot spot, but as the day went on, the inflamed area spread until it took over her entire belly, both inner thighs, and the sides of her ribcage. “It was like a wildfire burning out of control,” Strouss explains, “like a severe burn with a poison ivy rash on top of it. Ouch! The skin was red hot and moist. Juniper was obsessed with licking the area and had difficulty standing, walking, and sleeping due to pain and discomfort.”

Strouss contacted a veterinarian whose line of natural skin-care supplements she carries, describing Juniper’s symptoms. “Go see your local vet,” he told her. “This could be a superficial spreading pyoderma that will require antibiotics for about three weeks and may require short-term prednisone to put out the fire.”

However, after hearing this, Nancy Strouss didn’t follow his advice. Instead, she took matters into her own hands. Why?

“Juniper is a seven-year-old Golden Retriever,” says Strouss. “That’s an age/breed combination that tops the charts these days for developing cancer. Juniper has been raised and cared for holistically all her life. My goals for her have always been good health, good quality of living, and greater longevity. A conventional approach to the problem would have provided relief from her extreme discomfort, but at what price? In the long run, the excessive use of steroidal drugs and antibiotics destroys the body’s immune response and, I believe, leads to the development of cancer and other life-threatening diseases.”

Turning down the heat
Strouss cut all the hair away from the inflamed area and continued to trim it as the inflammation grew in size. “Every hour or so until bedtime, I took Juniper outside and sprayed her gently with cold water from the hose,” she says. “Sometimes she would stand in the wading pool, telling me it was time to hose her down. This brought her enormous relief. Had it been winter, I would have done this in the bathtub.” After each soaking, Strouss gently dried the area with soft towels and a hair dryer set on “cool.”

When Juniper’s skin was dry again, Strouss sprinkled the area with Gold Bond powder, a drug store talc powder that contains menthol, zinc oxide, acacia, eucalyptol, methyl salicylate, thymol, zinc stearate, and salicylic acid. “It’s recommended for skin irritations like burns, poison ivy, and prickly heat rashes,” says Strouss. “She lay on her back as I applied it, and I was careful to keep it away from her nose and mine, so we wouldn’t inhale its dust. Then I covered the area with a towel and held it in place for several minutes.

“These steps minimized her pain and allowed her to rest for about an hour, when we began again. Thinking about what was going on inside her, I gave her Traumeel, a homeopathic remedy for the symptoms of pain and inflammation, and Rescue Remedy, the Bach flower remedy recommended for stress, which I gave her orally whenever I noticed her panting or acting anxious. I diluted the Rescue Remedy with distilled water and sprayed it directly on the inflamed skin and in the air around her.”

Positive outcome
Juniper’s ordeal lasted one week, from the first symptoms of bloat and inflammation to their complete resolution. The rash disappeared, her skin stopped itching, and her playful disposition returned.

“Caring for a sick dog holistically can take longer and make more demands on the dog and owner than the use of symptom-suppressing drugs,” says Strouss. “I knew that in the long run, preserving Juniper’s own healing abilities was the right thing to do, but there were moments when I found myself fantasizing about prednisone.

“The temptation to treat these symptoms conventionally is overwhelming, both from the perspective of the dog’s discomfort and the amount of time and effort needed from the owner,” admits Strouss. “For many, like those who work away from home, hourly treatments are out of the question. If I didn’t have a flexible schedule, I would have used conventional therapies. But I was able to spend time with Juniper, so when I weighed the long-term benefits of natural care against the quick fix offered by conventional drugs, I decided in favor of Mother Nature, and I’m glad I did.

“Juniper is completely well, and she isn’t having to deal with the residues or side effects of cortisone, antibiotics, and other prescription drugs. I hope that, as a result, she will have a longer, healthier life.”

CJ Puotinen is the author of The Encyclopedia of Natural Pet Care and Natural Remedies for Dogs and Cats. She is a frequent contributor to WDJ.