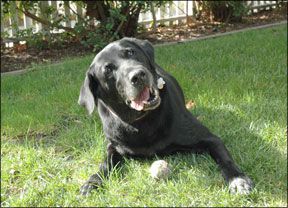 Aside from some stiffness and a little arthritis, Emma, a 13-year-old chocolate Labrador Retriever, had always been a happy, incredibly healthy dog, welcoming each new day with delight and bounding enthusiasm. One evening, though, things changed suddenly and scarily.

“I was at a friend’s house when, after laying quietly in the corner, Emma stood up and came into the room stumbling. She was staggering, panting, and totally confused,” says her owner, Ici Schemm. Something was very wrong, and then almost as suddenly, it was over.

After a visit to her veterinarian, Schemm learned that Emma suffered a bout of vestibular syndrome, a common condition in geriatric dogs stemming from inflammation in the nerves connecting the inner ear to the cerebellum, the control center for balance and spatial orientation. The duration of these incidents varies; so does the wide array of symptoms, with some dogs having relapses while others do not.

Schemm describes the sudden onset as “very scary for Emma and me, too.” Emma, fortunately, has not had another episode or shown any residual signs; she could be a poster dog for the most transient and benign form of vestibular disease. Other cases, however, can be much more serious.

The vestibular system
A dog’s balance is provided by a network of interactive anatomical structures that permit the dog to perceive his orientation in space and inform his extremities as to how to move appropriately. The vestibular apparatus encompasses the labyrinth of the inner ear along with the cochlea of the auditory system. Hair cells deep inside the ear function as sensors, detecting the position of the dog’s head. They also transmit this information to the balance system’s control center, the cerebellum and brain stem, which sends messages to the muscles in the body to maintain the dog’s posture and equilibrium.

Problems in the vestibular system typically reveal themselves suddenly, as the dog abruptly experiences problems with his balance. Emma’s staggering was a classic sign of vestibular dysfunction, but dogs may display varying degrees of loss of equilibrium and balance. Other signs include tilting of the head, uncoordinated muscle movements on one side of the body, falling, rolling, deviation of one eye in a given head position, circling, disorientation, and nystagmus (an involuntary eye movement where the eyes rapidly move back and forth or rotate, commonly described as “flickering”). Nausea (including vomiting) may occur, especially within the first day of onset of other symptoms, and dogs frequently decline to eat for the first day or more.

As a rule, vestibular disturbance is asymmetrical; any head tilt, falling, or circling usually occurs toward only one side. If the condition is caused by a brain lesion (abnormal tissue), the direction of tilt or circling indicates on which side of the brain the lesion is located. The same is true for nystagmus, which tends to occur in a slow phase and a fast phase, with the slower movements indicating the side where the neurologic lesion is likely to be.

“Idiopathic” means occurring without a known cause, and “idiopathic vestibular disease” is the most common type to be diagnosed. If the disease occurs in an older dog, his vet is likely to diagnose “old dog vestibular disease” – which suggests to many owners that old age is the cause. However, in this case, old age refers only to the patient, not the cause of disease.

In most cases of idiopathic vestibular disease, the dog’s symptoms have a sudden onset and resolve over a few days or weeks. Some dogs, however, retain a head tilt for years, although they are able to adjust and balance themselves.

Inner ear vestibular disease tends to develop more slowly; while the dogs exhibit the same signs that are common to idiopathic vestibular disease (head tilt, nystagmus, circling, imbalance), these are often less severe and may be only gradually perceived by the dog’s owner.

Bacterial infections are the most common cause of inner ear vestibular disease. Appropriate antibiotic therapy resolves most of these cases; sometimes sulfa drugs are added to the treatment regimen for their synergistic activity with antibiotics.The prognosis is less favorable in cases where the bacteria has infected the inner ear bones or if the infection is fungal. Treatment may have to be continued for as many as six to eight weeks to defeat these more stubborn invaders.

A number of inflammatory diseases, infectious diseases, and neoplasia (abnormal or uncontrolled growth of cells) can all cause central vestibular disease. Canine distemper virus, granulomatous meningoencephalitis, toxoplasmosis, neosporidiosis, aspergillosis, cryptococcosis, steroid-responsive meningoencephalitis, Lyme’s disease, Rocky Mountain spotted fever, and ehrlichiosis are the most common inflammatory and infectious diseases known to cause central vestibular disease in dogs. Treatment and prognosis for the vestibular disturbances depend wholly on the quick diagnosis and successful treatment of the disease or infection.

Diagnosing vestibular disease
A full neurologic examination is the starting point for diagnosis, followed by an otoscopic exam and blood tests.

Not all veterinarians are knowledgeable or experienced in performing full neurologic exams; ask your vet if she is confident in this area or would rather refer you to a more experienced colleague or specialist. A neurologic exam should include, at a minimum, observation of the dog’s movement (in several gaits) and posture at rest; palpation for abnormal muscle tone and mass; and tests of the dog’s reflexes and reactions to visual and minimally painful stimuli (such as pin pricks or pinches).

An otoscope can be used to reveal some problems within the ear, but special imaging (with x-rays or CAT scan) of the middle ear bones may also be in order. When a complete exam points toward a central vestibular problem, says Karen Kline, DVM, an associate professor at Iowa State University’s College of Veterinary Medicine in Ames, Iowa, an MRI of the tympanic bulla (one of the inner ear bones) is the “gold standard” for definitive assessment.

In addition to a complete blood count (CBC) and blood chemistry panel, blood tests that check the level of various thyroid hormones, including T3 and T4, are often performed to rule out hypothyroidism. A common problem in dogs, hypothyroidism occurs when not enough thyroid hormone is produced, causing a wide variety of symptoms, often including weight gain, hair loss, skin problems, and, in some instances, vestibular dysfunction.

Once diagnosed, most inner ear vestibular diseases respond well to treatment. In cases where hypothyroidism is detected, “a large proportion of patients will respond very well to medication,” says Dr. Kline, and antibiotics are often used successfully to treat bacterial infections of the inner ear. Improvement is typically evident within 72 hours, with most dogs becoming completely normal in a week or two, although, again, in some instances a head tilt will persist.

Many owners, like Ici Schemm, worry the most when their senior dogs experience a sudden onset of dramatic symptoms, but, says Dr. Kline, this is actually one of the better scenarios for vestibular problems. “An old dog has a very good prognosis. Not all dogs have a terrible disease producing clinical signs, so try not to overprognosticate at first,” she says. “Don’t panic; just make an appointment for your dog to see her veterinarian as soon as possible.”

Kathryn Socie is a freelance writer from Missoula, Montana. When she is not writing, she is out on the trail hiking or running with her dogs. 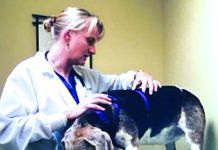 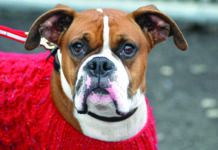 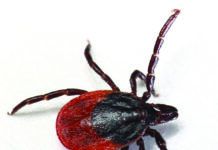