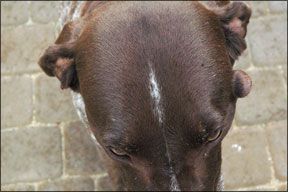 In June, Virbac recalled VeggieDent Chews for Dogs in Australia as a precautionary measure after veterinary researchers noticed a possible link between dogs developing kidney disease and consumption of these chews. No reason has been found and there is as yet no proof that the chews are causing the Fanconi-like syndrome. The chews were introduced to Australia in March of this year. They are manufactured in Vietnam, and are made of corn, starch, glycerin, soy, rice, yeast, sorbitol, corn derivatives, and water.

The Fanconi-like syndrome linked to VeggieDent Chews is similar to that associated with consumption of chicken jerky strips made in China. In fact, it was researchers looking into that problem who first noticed the correlation with VeggieDent chews, when a few dogs who had not consumed chicken jerky treats developed the same form of kidney disease. Possible problems with chicken jerky treats have been reported in the U.S. and elsewhere since 2007. Symptoms include excess drinking and urination, lethargy, vomiting, diarrhea, and glucose in the urine. Despite investigation by the FDA and others, the cause is still unknown.

VeggieDent chews have been marketed in the U.S. since September 2008, and in Europe and Japan for two years, but Virbac claims it has not received reports of problems anywhere except Australia – the only country that required some imported pet foods to be irradiated. Virbac blames the irradiation for the problem.

Neurological problems were found in cats consuming irradiated food in Australia last year, and after this problem, that country dropped the requirement for irradiation for those foods. While researchers are not yet certain what exactly has been responsible for the health problems caused by these irradiated foods, it is suspected that irradiation-induced changes in the food can cause toxicity. An upcoming article in WDJ will discuss irradiation of pet foods in more detail. – Mary Straus

Not without risks, but a good option for inoperable tumors in particular

In June, the FDA approved the first drug used specifically to treat cancer in dogs. The new drug, called Palladia (toceranib phosphate) and made by Pfizer Animal Health, targets mast cell tumors. It does not replace surgical removal, but is used for higher-grade tumors that recur after surgery, with or without lymph node involvement. It is not recommended for dogs with systemic mast cell tumor, due to the increased risk of adverse side effects.

Mast cell tumors primarily affect the skin. They can vary widely in appearance and must be identified by fine needle aspirate or biopsy; there’s no way to tell if a lump or bump is a tumor by looking at it or feeling it. Mast cell tumors are graded on a scale of I to III, with III being the worst. They are the second most common tumor found in dogs. If left untreated, they can spread to other parts of the body.

Surgical removal with wide margins is always the preferred treatment for this type of tumor, but that’s not always possible, particularly when the tumor is in an area without a lot of extra skin, such as the face or lower limbs. Chemotherapy and/or radiation therapy are used in these cases, as well as for high-grade tumors and those that have spread.

Palladia is a tyrosine kinase inhibitor that works by killing tumor cells and cutting off the tumor’s blood supply. The result is that it shrinks the tumors and prolongs survival time. The initial study of 86 dogs found the tumor disappeared in 8.1 percent of treated dogs, shrank in 29.1 percent of dogs, and stopped growing in another 20.9 percent of dogs. In addition, Pfizer reported that quality of life improved in dogs whose tumors responded to treatment. In its testing phase, Palladia was found to cause side effects in the majority of dogs who received it; these included diarrhea, decrease or loss of appetite, lameness, weight loss, and blood in the stool. Additional side effects were reported in a minority of the dogs. Most side effects are mild and resolve when the drug is stopped temporarily and then dosage is reduced, but in rare cases they can be life-threatening.

Palladia is given continuously every other day, with weekly vet checks and blood work recommended for the first six weeks, then every six weeks thereafter. The cost is as yet unknown, but it’s likely to be expensive, especially when the cost of follow-up care is included. For these reasons, if there is no lymph node involvement and it’s possible to try again to surgically remove the tumor after it recurs, that could be the better choice. You’ll need to discuss all treatment options with your vet before making a decision.

May not be needed by most pet dogs, but will be useful in shelters and kennels

A new vaccine for canine influenza virus (CIV) developed by Internet/Schering Plough was conditionally approved in May. Conditional licenses are granted before much is known about a vaccine’s effectiveness. This is a killed virus vaccine, so it cannot cause disease itself. The makers suggest that two vaccinations are given two to four weeks apart; then it can then be given annually. (Whether it needs to be given annually is unclear, since most viral vaccines confer long-term immunity.)

Canine influenza was first identified in 2004 in racing Greyhounds in Florida. It has now been found in 30 states, though the number of cases is still small. The areas most affected are Florida, New York City’s northern suburbs, Philadelphia, Denver, and a recent outbreak in New Jersey. There is no evidence that it has spread to other countries. Most cases occur where dogs are housed closely together.

CIV is a highly infectious respiratory disease that is considered one of many types of kennel cough. Each type of kennel cough is different, so vaccinations for other types will not protect against CIV. The virus can persist for up to a week in the environment, but is deactivated by common disinfectants, such as alcohol and bleach. It is most commonly found in high-traffic facilities, or kennels where many dogs are housed together.

The vaccine may only reduce the duration and severity of the disease rather than giving complete protection, similar to influenza vaccines in other species. It may also reduce shedding of the virus and so make it less contagious. Canine influenza is not contagious to other species.

Virtually all dogs exposed to CIV will be infected, though the severity will vary considerably. Symptoms can last up to a month, and may include a low-grade fever, nasal discharge, and a mild, productive cough. In 10 to 20 percent of cases, the virus can lead to high fever and pneumonia, usually caused by secondary bacterial infection. The fatality rate is currently between one and five percent of affected dogs. The virus is not responsive to antibiotics, though they can be helpful for secondary infections.

Should you vaccinate your dog? It depends on your dog’s likelihood of exposure and overall health. Because the risk of CIV to most dogs is minimal at this time, few household dogs are likely to benefit from the vaccine. It may be helpful for kennels where large numbers of dogs are housed together, especially in areas where the disease is prevalent. – Mary Straus

Update on Doxycycline and Heartworm Disease

In August 2006, we reported on the finding that heartworms harbor a symbiotic organism called Wolbachia, and that treatment with doxycycline to destroy the Wolbachia could reduce the chance of adverse reactions during heartworm treatment.

According to studies published in late 2008, treatment with a combination of weekly ivermectin (Heartgard) and intermittent doxycycline helps rid the body of adult worms, reduces the effects of the worms, and stops the heartworms from being infectious to other dogs. The effects of the combined treatment are more pronounced than with either drug alone, making the treatment a more effective and safer alternative or adjunct to Immiticide.

“Preliminary observations suggest that administration of doxycycline and ivermectin for several months prior to (or without) melarsomine (Immiticide) will eliminate adult heartworms with less potential for severe thromboembolism than melarsomine alone,” one study concluded.

This study followed dogs treated with weekly ivermectin at standard monthly heartworm preventative doses (6 mcg/kg), and with doxycycline at 10 mg/kg daily for weeks 1-6, 10-11, 16-17, 22-25, and 28-33 (the study lasted 36 weeks). Antigen test scores gradually decreased, reflecting a reduction in the number of adult worms (antigen test scores did not change for dogs treated with either ivermectin or doxycycline alone).

An Italian study found that dogs treated with the same combination of doxycycline and ivermectin had less perivascular inflammation. Dogs who also received Immiticide showed no thrombi in their lungs (pulmonary thromboembolism, or blood clots in the lungs, are the major life-threatening adverse effect of worm death). A third study with the same protocols concluded, “Results indicate that the combination of these two drugs causes adult worm death.”

These studies clearly indicate that treatment with a combination of weekly ivermectin and daily doxycycline given intermittently will sterilize the heartworms, prevent the dog from being infectious to other dogs, speed up the death of the worms prior to (or in place of) Immiticide treatment, limit inflammation and damage caused by the worms’ presence, and reduce the chance of serious adverse reaction from Immiticide treatment.

Weekly doses of Heartgard should be safe for all but those dogs with the mutant MDR1 gene that affects collies and related breeds, making them more sensitive to ivermectin and a number of other drugs. – Mary Straus