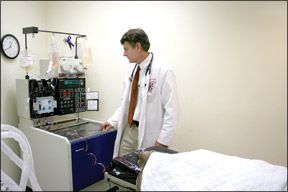 Exciting news regarding bone marrow transplants for dogs with lymphoma has recently emerged. North Carolina State University’s College of Veterinary Medicine in Raleigh is the first university in the world to open a canine clinical bone marrow transplant (BMT) unit. Dr. Steven Suter, assistant professor of veterinary oncology at NCSU, is about to perform his

30th transplant, all done over the past two years.

Lymphoma, also called lymphosarcoma, is one of the most common cancers to occur in dogs. While it used to be considered a disease of middle-aged and older dogs, those demographics have changed in the past 5 to 10 years, with more and more young dogs being diagnosed. Golden Retrievers have a particularly high risk for this type of cancer.

Lymphoma affects the lymph system, which is spread throughout the body, so surgery cannot be used to eradicate this form of cancer. Without treatment, most dogs die within two months of diagnosis. While chemotherapy can extend the life of dogs with lymphoma for up to two years, fewer than 2 percent of dogs are cured.

“The success rate for bone marrow transplants in people with lymphoma is 50 to 66 percent, and the hope is that dogs will respond similarly,” says Dr. Suter. Of the dogs who have received transplants at NC State in the past two years, 70 percent are still alive, but it’s still early days for many. Full results will not be known for a couple of years, but it is expected that even those dogs who are not completely cured will likely remain in remission for much longer than would have been the case without the transplant.

What the process entails
This is not actually a new technology, as bone marrow transplant protocols for people were originally developed in the 1970s from research done on dogs. The same leukophoresis machines used to harvest healthy stem cells from people can be used without modification for dogs.

“The dogs need to be in either complete remission or very close to complete remission to undergo the BMT procedure,” says Dr. Suter. “So, they all have to receive chemotherapy to get them to that point. Once in remission, they can have a BMT at any time afterward.”

The transplant procedure requires several days of preparation, starting with twice-daily injections of a drug called Neupogen, designed to drive healthy stem cells from the bone marrow into the bloodstream where they can be harvested. An ultra-low-fat diet is fed during this time, as lipids in the blood make stem cell extraction more difficult.

A week later, the dog is placed on a leukaphoresis machine that harvests stem cells from the blood. This process takes about six hours. The following day, the dog receives full body radiation to kill the cancer cells in his bone marrow. Immediately afterward, the stem cells that were harvested the day before are infused back into the bloodstream. The entire process is done under sedation or anesthesia and is painless for the dog.

Following the procedure, the dog is kept at the facility in an isolation ward for about two weeks to give the immune system time to recover as the stem cells start to regenerate. Vomiting and diarrhea due to the radiation are common during this time; drugs are given to combat these side effects. Antibiotics are given before and after the procedure to reduce the chances of bacteria entering the bloodstream and to help fight any infection while the immune system is suppressed. Blood transfusions may be needed due to internal bleeding from loss of platelets that are created by the bone marrow.

For most dogs, no special care is needed after they return home. Hair loss and tiredness are the primary side effects at this time. Dogs will experience bouts of fatigue but should return to normal within four to six weeks.

Promising, not guaranteed
Not all dogs who receive a bone marrow transplant will be cured. While there is no way to know when a dog is completely cancer-free, most relapses so far have occurred in the first four months following the transplant. Dogs who make it beyond this point are more likely to be cured or remain cancer-free for two years or more.

The cost of a bone marrow transplant at NCSU runs from $13,000 to $17,000, averaging about $14,500. This includes everything except intensive ICU care, blood transfusions, and additional diagnostics that may be needed in some cases. There are additional monitoring costs after your dog returns home. Pet insurance may cover some of the cost of bone marrow transplants depending on the company and plan.

Stem cell extraction from bone marrow is more difficult with small dogs. “The smallest dog we’ve transplanted thus far was a 12.5-kg French bulldog (27.5 pounds),” says Dr. Suter. “We are getting ready to transplant an 11-kg (24 pounds) Shih Tzu in a few weeks. Probably about the lowest we can go is around 8 kg (or about 18-20 lbs).”

Dogs with serious health problems such as kidney or heart disease, or conditions that make infections more likely, such as diabetes or Cushing’s disease, do not qualify for the transplant procedure, as the risk would be too great.

Five private facilities in the U.S. are gearing up to offer bone marrow transplants for dogs. Eight transplants have been done by Edmund Sullivan, DVM, in Bellingham, Washington, beginning in 2004, but most of these clinics are just beginning to do or have not yet done their first procedures. There is some concern that it is too soon to be marketing bone marrow transplants so widely, before enough is known about the success rate and how to treat and prevent potential side effects. The five facilities are: