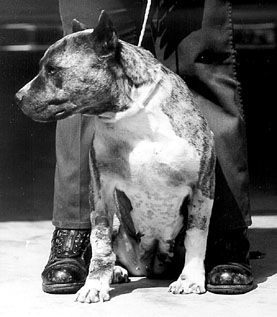 I have a litter of Boxer puppies and two young female Boxers with a slight case of demodectic mange. I’ve been told so much conflicting information about this condition. I’ve been told by several vets and breeders that demodectic mange is not contagious, but is a genetic disorder brought on by stress or a lowered immune system. One vet (who breeds Boxers) told me it IS contagious and I should put my dogs to sleep! These are my babies; there is no way I’m going to destroy them over a skin condition they aren’t even hurting from. They never scratch or itch.

I am treating the older dogs with a homemade dip (1 quart kerosene, 1 pint turpentine, 1 pound sulphur, 1 gallon used motor oil) every 10 days and it is clearing up. The pups are getting 1/2 cc of injectable Ivermec once a week. I gave one pup away and their vet dipped it at eight weeks old and she died a week later after being very sick for two days.

Please help me with answers to these questions:

What is demodectic mange caused by? Why are Boxers so susceptible to it? How can all these puppies be affected by it when I know for a fact that none of their parents or even grandparents ever had demodectic mange? How would you recommend treating it in an older dog, and how would you treat it in puppies?

One of my dogs (a German Shepherd) has localized demodectic mange. She has slight hair loss around her nose and mouth. My veterinarian gave me some Goodwinol ointment to put on her, but she licks it all off right after I put it on her, which I don’t like.

Is there a more holistic method of dealing with this? Can demodectic mange be cured?

To answer this question, we turned to veterinarian Pat Bradley, of Conway, Arkansas. A graduate of Louisiana State University, Dr. Bradley practiced conventional veterinary medicine for 10 years before opening an all-holistic practice, specializing in veterinary homeopathy in 1995.

There are three types of mange, and each has its own challenges for the dog’s owner. Only one, sarcoptic mange, causes severe discomfort for the dog. I’ll discuss them each, from least serious to most serious.

Cheyletiella mange, the least serious, is also known as walking dandruff, due to the enormous amount of dandruff that is produced in response to the cheyletiella mange mites that live on the dog’s skin. These mites spread quickly to other dogs, but the resultant symptoms tend to be short-lived, and the itching the mite causes is mild.

Demodectic mange is caused by irritation from tiny mange mites that live in the dog’s hair follicles. For this reason, it is also sometimes called follicular mange. It is also called red mange, because it usually starts out looking like patchy hair loss. Dogs often get it around the face and around the eyes, and on the feet first. Most of the time, it doesn’t make the dog itch or scratch; it just looks awful.

Demodectic mange is caused by the demodex canis, a tiny parasite, but it is considered by the vast majority of vets to be an immune system disorder, because these mites are found on many healthy dogs with no symptoms of skin disease at all. I have spoken to veterinarians who thought there was a contagious component to it, or that mothers could pass it to the puppies. I think it is more likely that the immune system disorder is genetic, and that the puppies inherit their poor immune system from their mother.

I personally believe the theory that dogs get mange when their immune systems are not functioning well, when the dog’s body fails to mount an adequate defense against the mites and keep their populations under control.

Demodectic mange is most common in puppies, and this is thought to be attributed to the fact that the puppy’s immune system is too immature to control the problem. Some breeds do seem to be more susceptible to it than others, but they are probably the breeds who have more immune problems than other dogs. I have seen a lot of mange on Boxers, pit bulls, and Rottweilers – basically, these dogs (and others) who tend to have weak immune systems overall. And of course, immune system problems don’t just plague certain breeds, they plague certain lines within the breeds, too. For this reason, demodectic mange tends to be a pure-bred disease, although any dogs, including mixed breeds, can get it.

It is also common that dog who are under a great deal of stress, such as lost dogs and shelter dogs, will break out in demodectic mange. Other circumstances that stress the dog’s immune system can also cause an outbreak.

Back when I was in traditional practice, when I was still using steroids for itchy skin conditions, on several occasions I saw mange break out on dogs that had been given steroids. Often in those strange cases, it would turn out that the dog had had mange when it was a puppy, or the dog had been adopted from a shelter and had an unknown background – possibly including mange. Some pregnant or nursing dogs sometimes break out in mange, as do some females in heat. Some old and sick dogs will suddenly break out with demodectic mange.

There are two forms of demodectic mange. One is localized, where a dog just gets little spots where the hair falls out. Most of the time, this type will go away on its own, with or without treatment.

Then there is generalized demodectic mange, which covers a larger percentage of the body. In some dogs, the generalized mange never goes away, although a good percentage of dogs stop getting it after they reach adulthood, unless they get really stressed.

Traditional treatment for the generalized type usually involves a dip or other topical treatment. But most dips and other topical treatments don’t touch the mites, because they live so far down in the hair follicles. The most effective dips contain something called Amitraz as the active ingredient. It is pretty toxic, and the dogs can get pretty sick afterward. The standard treatment is a dip once a week, for four to six weeks.

Obviously, I wouldn’t recommend this approach; I think that exposing the dog to this kind of toxin will cause more damage to his health than any potential benefits are worth. I do know some veterinarians have some success using things like Amitraz. But I’m not certain you can properly credit the dip when a young dog gets over the mange, since most young dogs will outgrow the problem anyway.

Most veterinarians have heard of or seen dogs that have been treated with homemade dips made of things like kerosene or turpentine. Most of those preparations are used for sarcoptic mange, but you do see them being used from time to time for demodectic mange. All of these homemade preparations are potentially life-threatening to the dog. Petroleum distillate poisoning is the most likely result of those treatments.

I would recommend the same treatments for a dog with demodectic mange as I would for any immune-stressed dog: I would put the dogs on some immune-stimulating herbs, such as echinacea and goldenseal (adjust the dose by your dog’s weight, according to the label recommendations for an average 150-pound person), make sure that the dog isn’t vaccinated any more than absolutely necessary, and stop using anything toxic on the dog or feeding the dog any toxins, such as foods containing artificial preservatives and colors.

I’d also tell the owners to try to keep the dog as unstressed and emotionally happy as possible – no sending them off to a boarding kennel or off to a show – and not to let the dog get pregnant and run down.

I’d also recommend improving the dog’s diet: get him the best food you can; a fresh, raw diet is best. A good vitamin/mineral supplement would be advisable, but at a minimum, I would supplement his diet with extra vitamins C, A, and D. I would recommend some fresh garlic in the diet; it helps with every skin condition.

In my experience, homeopathy has been very effective for helping puppies with demodectic mange. However, it is important for a homeopath to take an individualized approach to suggesting the best remedy for each dog with mange; there is no single magic remedy.

Since it is considered as a genetic problem by most vets, many recommend that a mangy dog is spayed or neutered; some go a step further and suggest that the parents of the dog are spayed and neutered. There are some breeders, of course, that really strongly disagree with that. I will just comment that it will help lower the stress on the dog’s system – and therefore, help the dog defeat the mange – if it is not being used for breeding. But I have never heard of anyone suggesting that a dog be euthanized for having mange; that’s pretty extreme.

This is the most dreaded type of mange, because it is terribly contagious – to other dogs AND people – and makes the infected dog or person itch horribly. It is better known among humans as scabies.

However, it can be a challenge to get a good skin scraping from a dog with sarcoptic mange (which in itself is a clue that the offending mite is sarcoptic, not demodectic), because the skin gets so damaged, and oozes so much keratin and blood after a few weeks of intense itching, that it makes it difficult to find a mange mite in a skin scraping.

Scabies Easy to Treat on Dogs

The good news is that it is relatively easy to get rid of. Usually, just one or two dips with an over-the-counter preparation will do the trick. For sarcoptic mange on puppies, you have to use much milder shampoos, rather than using a dip. Sometimes the dams will have sarcoptic mange and the puppies get it when they are born; you can see it on them when they are really little.

In cases where a litter of pups has sarcoptic mange, I recommend that they are kept in the bathroom, where the floor can be washed with a bleach solution every day, and all their bedding can be washed, too.

A dog’s skin can get terribly damaged from scratching when he has sarcoptic mange. He may require some antibiotics if he gets a bacterial infection, or even some steroids to help relieve the itching. 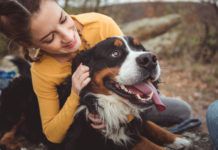 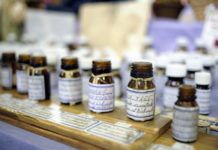 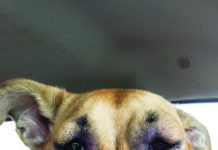 Dog Stung By A Bee? Here’s How to Treat It