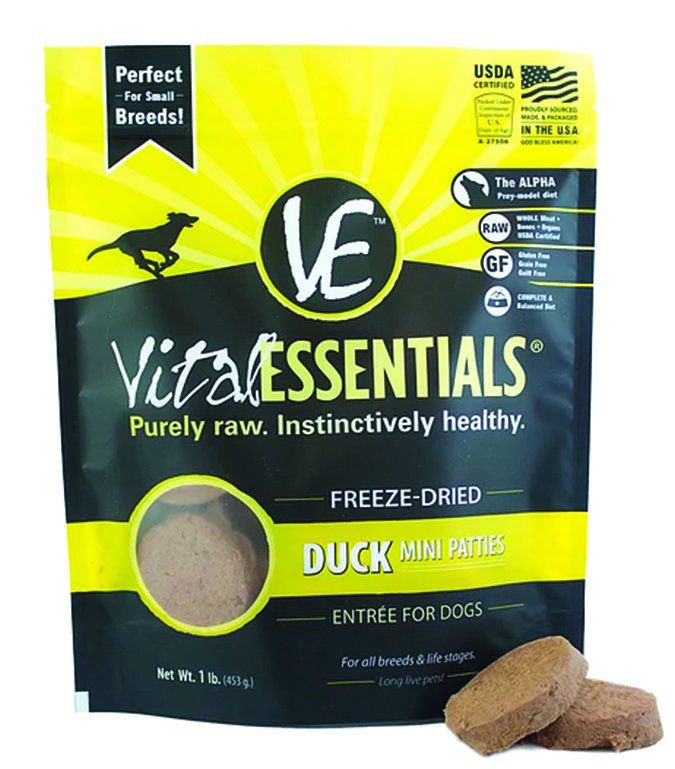 Are you looking for the most expensive way to feed your dog? Probably not – but if price is no object, the freeze-dried dog food products we’ll describe here are very high-quality foods that are extremely shelf-stable (in many cases, without the use of any preservative, or with a natural preservative only). Many are made with organic ingredients; many are made with certified humanely raised and/or grass-fed meats. All of the freeze-dried dog food diets are made with a high inclusion of meat; some contain as much as 95 percent animal muscle meat, organ meat, and raw ground bone.

Most of the other ingredients in freeze-dried dog food diets are raw and/or very lightly processed. All the freeze-dried raw diets we reviewed are grain-free – not because we think grains are inappropriate in these foods; it’s the food manufacturers who seem to have decided that raw feeders won’t buy a product that contains any grain.

Many people who feed home-prepared or commercial raw diets to their dogs when they are home replace this diet with a freeze-dried raw food when they travel, or when the dog is left with a sitter who doesn’t want to deal with a fresh or frozen raw diet.

In addition to being raw and lightly processed, freeze-dried dog diets offer other benefits:

Very low-moisture foods such as these products can be stored at room temperature (in unopened packages) without spoilage or rancidity – much longer than kibble. That’s because most freeze-dried diets contain about three to five percent moisture; conventional kibble generally contains about 10 percent moisture. The less moisture there is in a food, the less biological activity can occur.

When rehydrated, these foods are highly palatable to most dogs. It may be due to the concentration of flavor in freeze-dried food ingredients or their minimal processing. Dogs with poor appetites (like very senior or chronically ill dogs) may accept these foods when nothing else appeals.

As a generalization, the makers of these freeze-dried dog food products are targeting the top end of the market and have an extraordinary commitment to sourcing top-quality ingredients.

Though it should be obvious, it bears repeating that all of the products included in this review are made with freeze-dried raw meats. Raw diets aren’t for every dog or owner. Cooked foods may be safer for immune-compromised individuals. Some dogs digest cooked foods better.

That said, freeze-dried dog foods don’t seem as “raw” as raw-frozen or fresh raw foods, but it’s important to understand that they are, in fact, uncooked. Freeze-drying removes so much moisture from the ingredients that it stops the biological action (decay) in the food, with less damage to the meat’s natural enzymes or vitamins than cooking temperatures cause. When the foods are rehydrated, the biological activity of any pathogenic bacteria that might be present in the food can resume.

The Food Safety Modernization Act (FSMA) of 2011 contains zero-tolerance policies for products that test positive for pathogenic bacteria. For this reason, some of the manufacturers of freeze-dried raw foods subject their products to a “kill step” known as high-pressure processing (also known as high-pressure pasteurization, and in any case abbreviated as HPP); they don’t want to risk increased surveillance or recalls from food control officials.

The owners of some companies, however, believe so strongly in the benefits of raw foods, that they refuse to use a kill step. Instead, they rely on the quality of their ingredients and their own food “hazard analysis and critical control points”(HACCP) plans to prevent selling contaminated products. They understand that the FSMA policies are present to protect dogs and their owners, and that today’s human food supply does sometimes contain pathogens – but they also have observed that most healthy dogs can thrive on raw foods that may contain some pathogens (few healthy dogs have trouble with Salmonella, for example, though Listeria and e. Coli are another story). And, importantly, they engage and educate their consumers about these facts.

There are food-industry experts who feel strongly that HPP is a very safe technology, and others who worry that it may alter foods on a molecular level. We feel fine about HPP; we’ve been to HPP plants and observed the raw dog food before, during, and after treatment and have confidence that it is not harmed or made unsafe to feed. On the other hand, we respect the right of owners to feed raw foods that have not undergone a kill step – as long as they are informed about the risks to which they are subjecting themselves and their dogs.

Some of the companies utilize a “test and hold” program whereby finished products are tested for pathogens and not released for sale until results indicate the products are uncontaminated.

The freeze-dried foods on the market are diverse in content, appearance, and form. Some are very high in protein and fat – there are even products that contain more fat than protein! – while others compare in these respects to high-end kibble. Always check the guaranteed analysis when switching to a product in this category, particularly when feeding a dog who needs to be on a lower-fat diet.

Most of these freeze-dried dog food products are meant to be rehydrated with water before serving, though the products that come in small cubes can be fed as treats without rehydrating. In general, though, adding water will bulk up the food, making it more filling for your dog, as well as easier to digest.

Some of the freeze-dried dog food products are very powdery, which makes them turn into a sort of mush (or gruel, depending on how much water you add) when rehydrated. Some are powdery with large chunks of identifiable dehydrated meats, fruit, and/or vegetables – either an advantage (if your dog enjoys the contrast in taste and mouth-feel) or a disadvantage (if your dog seeks out only the chunks or mush and eschews the other).

On the table that starts on the next page, we have listed the ingredients for one variety of each company’s food. When a chicken variety was available, we used the ingredients of that variety, so you could compare relatively similar product offerings.

The Price of Freeze-Dried Dog Food

We’ve listed prices for the largest size of the products that are available; the larger sizes are generally the most economical (if that can be said at all of this category).

Because the cost of these products is so high, we imagine that few people feed them full-time, especially if their dogs are large or many. We would most likely use them only for a small dog, on a short-term basis while traveling, as training treats, to jump-start the recovery of a sick dog, or to extend the life of a chronically ill dog. 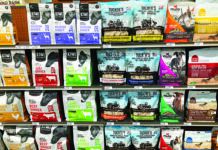 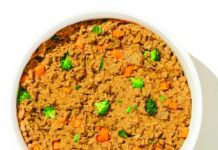 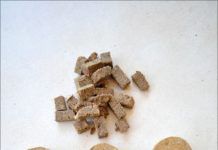