Occasionally we are asked to rate the various options that owners have for feeding their dogs, based on the relative “healthiness” of each major type of food: home-prepared (raw or cooked); commercial raw, frozen diets and freeze-dried or dehydrated raw diets; canned food, and kibble. Actually, in our opinion, that list of food types is ranked accurately right there, from best to worst, in terms of their potential for improving or supporting a dog’s peak health.

On what do we base that ranking? While it’s difficult to get nutritionists to agree on just about anything, it’s likely that most would agree on the following general idea: that a diet that was formulated to be “complete and balanced” and comprised of fresh, lightly processed or unprocessed species-appropriate ingredients is healthier than a “complete and balanced” diet containing highly processed ingredients that are uncommonly consumed by a given species in nature. That general theory explains our high esteem for the dehydrated and freeze-dried diets that we’ve listed and described in our WDJ 2014 Dehydrated Dog Food Review

We’ve lumped a lot of disparate diets into this category. Even though they vary widely in terms of ingredients, “rawness,” manufacturing process, finished form, and protein and fat levels, what all of these diets share is their high inclusion of high-quality animal protein and fats, and a method of preservation that only lightly alters or damages the nutrients in the food: drying. The idea is to remove moisture from the food; the less moisture that is contained in a food, the longer its nutrients will remain unspoiled and available to the consumer (your dog).

Drying can be accomplished at low temperatures, but it takes longer and leaves meats and fats vulnerable to oxidation (spoilage); most dried foods are prepared with temperatures of 140ºF to 180ºF. (Food can rot when kept in temperatures between 140ºF to 32ºF; If it’s held in temperatures colder than 30ºF, it freezes; if it’s exposed to temperatures higher than 180ºF, it will start to cook.) Dehydrators actually lightly cook the food as it dries, altering the cellular structure of meats, fruits, and vegetables. In contrast, proper freeze-drying doesn’t affect the appearance or taste of foods as much.

Freeze-dryers expose foods to low temperatures, freezing them relatively quickly, and then to high air pressure (freeze-drying machines resemble large pressurized gas tanks). When the pressure inside the chamber is high enough, small heating units are turned on, heating the trays that the food sits on, and causing the frozen water (a solid at that point) in the foods to transform into a gas (water vapor). Pumps pull the vapor out of the chamber while keeping the internal air pressure high. The term for freeze-drying is sublimation: the act of a solid shifting directly into a gas.

It sounds radical, but the process actually leaves most foods less damaged than dehydration. Freeze-drying doesn’t shrink or toughen most food ingredients, and it leaves most aromas and flavors in the food intact. There are some food compounds that don’t freeze-dry well; those that contain vinegar or alcohol don’t sublimate nicely, but these are not common ingredients in canine diets!

Some owners seek out these diets specifically for their rawness; they believe feeding raw meat is natural and beneficial to their dogs. If a raw diet is your chief motivation for considering these diets, avoid the products that contain dehydrated ingredients in favor of the ones that contain freeze-dried ingredients.

Check out our complete review of the top Dehydrated & Freezer-Dried Dog Foods by clicking here or following the link at the top of the page. 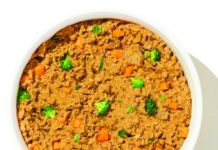 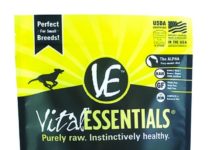 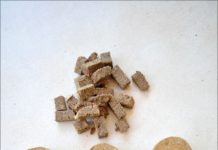