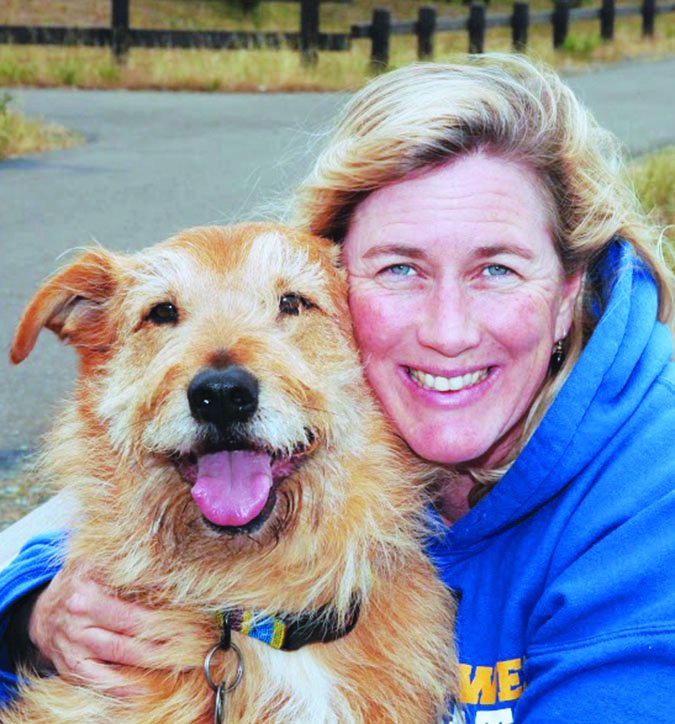 It finally hit me: I’m now a pit bull owner. I’ve never been able to say those words before. When my son heard the news, he called – from work! – to ask how I was, was I okay? A sensitive young man and a dog lover himself, he knows I’ve been fighting off some lingering sorrow over the numerous sad events in my life in 2015 by indulging in perhaps too much fostering. But he also knows that the bully breeds have never been my favorite, and he must have worried that my judgment has been compromised by depression.

Is it shocking to hear the editor of a dog magazine say she doesn’t particularly like bully breeds? I could go farther: I’m not a fan of Boxers, Mastiffs, or Bull Terriers. I tend not to enjoy terriers of any kind. Yorkshire Terriers, ack! When I was a young adult, my parents had some that I honestly loathed, and they sort of ruined the breed for me.

That’s not all! I actively avoid the company of dogs who have so much hunting instinct that hunting is all they want to do outdoors. I like to be able to walk with a dog and relax, for crying out loud! I don’t like having to be vigilant every step of the way, or to have to keep a dog on leash on every walk, lest she run so far after game that she disappears (for any length of time) or threatens to harass or murder some other animal. I have so many friends who have German Wire-Haired Pointers, and I can’t say I’ve ever liked a single one of them.

While I admire the work that some of the German Shepherd-type dogs do (GSDs themselves, as well as the Malinois, Tervuren, et. al.), I wouldn’t want to live with one. I love Border Collies but for what specific reason I cannot say, I tend to dislike Aussies.

That’s just off the top of my head. Who haven’t I alienated yet?

If I have alienated you, I have to ask: Can you honestly say you love all breeds equally? You’d be just as happy with a pack of Chihuahuas as you would be with a Great Dane? You could give your heart to a Great Pyrenees as easily as a Chinese Crested?

I don’t think it’s disrespectful or insulting to admit that you have favorite breed types, as long as you respect the fact that other people have favorites (and most-disliked breeds), too. Especially if you are open to the possibility that there may well be individuals among the breeds you say you don’t like that you could absolutely love.

Maybe this is all just rationalization, because that’s what’s happened to me: I fell hard for an individual of the most maligned not-breed, the most feared and misidentified type of dog in this country, the dog that is over-represented in every open-admission shelter in the country, the pit bull terrier-mix.

But I haven’t undertaken this adoption lightly. I happen to believe that the owners of this type of dog – and all large, powerful dogs – need to be willing to take more than the average amount of responsibility for the socialization, training, management, and utter control of their dogs. When someone neglects the training or socialization of a cute little poodle-mix, and the poorly behaved, fearful dog ends up in a shelter, the odds are usually pretty good he’ll get a second chance at a nice home. That’s just not true for anything that looks like a “pittie.” Pity. There are countless reasons for this, some valid, some pure fiction, but it’s true: this type of dog has cultural baggage.

My hound foster is a master of door-darting, and we’ve been working daily on “wait” at the door. But she caught me being inattentive the other day and darted out the front door just in time to accost a woman walking a Chihuahua. Yes, I became that person. “She’s friendly!” I cried as I raced after the hound, but the lady wasn’t the slightest bit alarmed; she smiled at the hound’s bouncing around and goofy goodwill. That won’t be true if my pit-mix does the exact same thing – so I will be doing everything possible to make sure it just doesn’t happen.

Nancy Kerns
0
My sister and her husband used to live down the street from a fire station. At least 10 times a day (often...