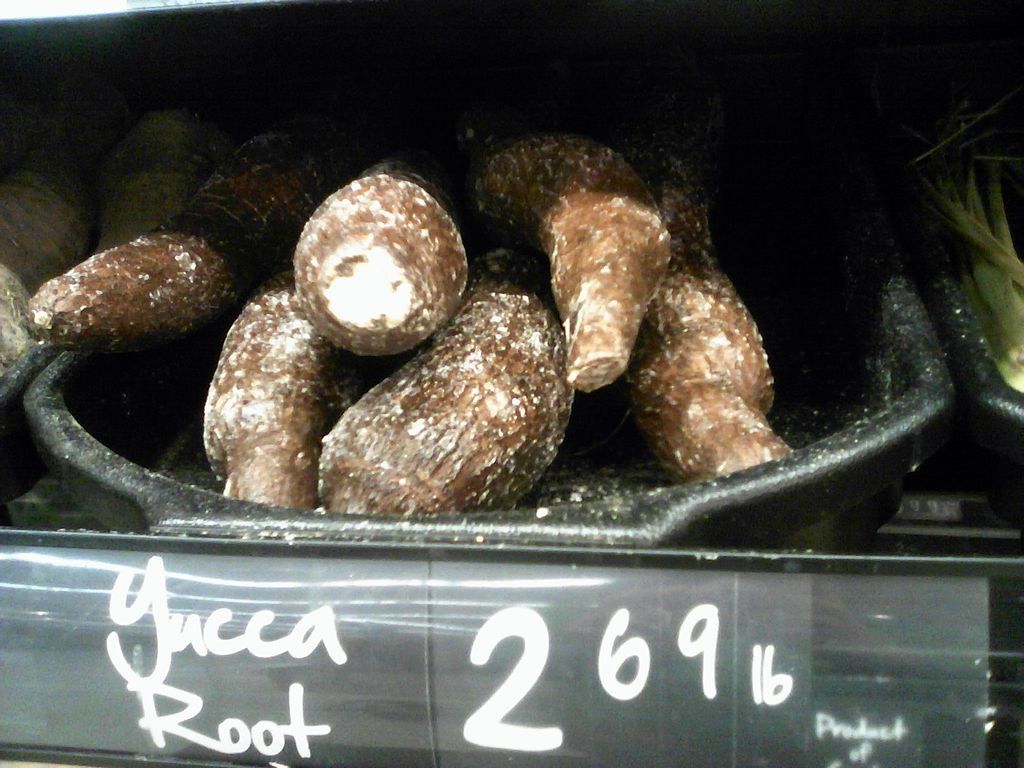 1. Consider a yucca supplement for a dog with digestive problems that prevent him from properly utilizing his already top-quality diet, or for a dog with arthritis.

2. Use yucca for four days, and then discontinue for three days. An on-and-off-again schedule will help prevent irritation of digestive tissues.

3. Discontinue the use of yucca if the dog exhibits digestive upset such as vomiting and discuss this with your holistic veterinarian.

When valuable herbs gain momentous popularity in the mainstream marketplace they often show up as “buzz words” on various product labels. By market decree such herbs become not only popular, but stylish. After all, why would anyone want to buy an herbal cold remedy that doesn’t contain the mighty echinacea?

Usually when mass-market, celebrity herbs are born, oceans of research and published introspection soon follows to satisfy the curiosities of the consumer. We want to know why certain herbs keep showing up in the products we buy and use, and rightly so. Nevertheless, many herbs remain as ambiguous words on the labels of our favorite animal care products.

Why is this so? Because manufacturers are largely prohibited, by federal regulations, to provide any tangible clues about the medicinal or nutritive attributes of the herb ingredients they list on their animal product labels.

One of the best examples of this is yucca – a succulent, cactus-like member of the lily family that inhabits desert areas and garden landscapes throughout America. Anyone who has studied natural dog and cat food labels, shampoo labels, and ingredient lists for livestock feeds has seen the name of this important plant food and medicine, yet very few of us can cite its intended purpose, much less a broad view of its holistic potential.

Yucca as a Nutritional Aid to Dogs

The description “nutritional supplement” really doesn’t fit yucca as well as the term “nutritional aid.” Although yucca root contains notable quantities of vitamin C, beta-carotene, calcium, iron, magnesium, manganese, niacin, phosphorous, protein, and B vitamins, this herb’s greatest nutritive and healing powers are chiefly attributable to a group of compounds collectively known of as saponins, which are found in the root of yucca.

Saponins are plant glycosides, which are characterized by their tendency to dramatically foam up when agitated with water, much like soap does. When ingested in very small amounts with food, saponins contribute a cleansing and penetrating action upon mucous membranes of the small intestine, which in turn helps with the assimilation of important minerals and vitamins through intestinal walls.

The results can be astounding. In studies conducted at Colorado State University, cattle fed small quantities of yucca root showed greater weight gain than those without. Other trials have concluded that chickens that are fed yucca have a tendency to lay more eggs, and dairy cattle tend to produce more milk.

Other research shows that when added to dog food, yucca can help reduce the emission of noxious odors in urine and feces. This finding comes from studies in which the chemical breakdown of urea (the body’s final by-product of digested proteins) were examined. The findings: anhydrous ammonia, which is largely responsible for the less-than-delightful odor of animal excrement is caused by a single microbial enzyme called urease, was inhibited when food supplements containing preparations of Yucca schidigera were fed. In the studies, fecal and urine odors were reduced by up to 56 percent in dogs and 49 percent in cats.

While the notion of less-offensive stool and less yard cleanup is attractive to many, the issue of excess urease should not go unchecked, as this kind of imbalance may lead to health problems that are much more serious than a soiled backyard.

Excess urea (and larger, more offensive stools) are often the result of a poor quality diet, where protein fillers (like soy meal) or cheap meat by-products cannot be efficiently broken down and eliminated during the digestive process. If left unchecked, this can lead to serious problems, such as urinary stones, kidney disease, arthritis, or chronic skin problems.

In other words, feed a balanced, natural diet, and excess fecal and urine odor shouldn’t be an issue in the first place.

My bottom line: yucca root can be helpful for optimizing a good quality diet that has been specially tailored to the needs of dogs that need added help with nutrient absorption. However, yucca really has no value as a supplement to lousy food.

Yucca root also possesses chemistries that add powerful medicinal activities to the veterinary herbalist’s goodie bag. Among these chemistries are sarsasapogenin, smilagenin, and various other compounds that are loosely known by the herbal/scientist community as “phytosterols.”

Herbalists theorize that phytosterols serve the body by stimulating and assisting the body in the use and production of natural corticosteroids and corticosteroid-related hormones. Unlike corticosteroid drugs such as prednisone, yucca is thought to work in concert with natural autoimmune functions of the body – actually supporting immune system functions as opposed to shutting them down.

It can be reasonably hypothesized that the natural, corticosteroid-like actions of yucca may play a role in the body’s natural production of growth hormones, which in turn may contribute significantly to the accelerated growth and production we see in animals that receive it in their food. And although this theory has not been established as “fact” by the scientific community, we know that yucca is very safe in the diet when fed in moderation and in a sensible manner.

What all of this means is that yucca can be a very useful natural remedy in the treatment of arthritis.

In a study conducted at the beginning of the twentieth century, yucca was found to bring about safe and effective relief (from pain and inflammation) to human arthritis patients when taken four times daily over a period of time. Although this study has been repeatedly discredited by the American Arthritis Foundation because of the contro-versial manner by which the study was conducted, the beneficial effects of yucca in humans and animals remain clearly validated in the minds of holistic practitioners who have repeatedly used it and witnessed positive results.

In my experiences with monitoring the therapeutic effects of yucca root in arthritic dogs, yucca can be very useful toward reducing inflammation of the knees and hips, especially when the herb is used concurrently with liquid extracts of licorice root (Glycyrrhizza spp.), alfalfa, and a liquid glucosamine supplement. Part of this may be attributable to the improved assimilation of glucosamine, another possible attribute of yucca’s amazing saponin constituents.

Although scientists largely remain focused on the saponin constituents of yucca, it is obvious that there is much to discover about several other compounds within this plant. Native Americans used the roots, leaves, and flowers in a wide variety of applications, ranging from burns and digestive disorders to contraceptive applications.

A water extract (tea) of Yucca glauca (“small yucca” or “soapweed”) has been shown to have anti-tumor activity against a certain type of melanoma in mice. Its mechanism in this context is believed to stem from its polysaccharide constituents, not necessarily its steroidal saponins.

Perhaps most famously, yucca’s high saponin content has been widely exploited to make soap and shampoos.

A Few Words of Caution

Yucca root is classified by FDA and the Association of American Feed Control Officials (AAFCO) as “Generally Regarded as Safe” (GRAS) for use in animal feeds and supplements. Yucca root powders, extracts, and other preparations can be used very safely in dogs and other mammals. Nevertheless, several controversies have been raised over the years concerning the safety of yucca’s saponin constituents.

Many of these concerns stem from cases of intestinal bloating or photosensitivity in livestock. Most of these events were triggered when too much saponin-rich, fresh alfalfa was fed while the plants were in bloom (alfalfa should only be harvested and fed prior to blooming).

There have also been reports of bloating and other digestive problems that have been attributed, at least in part, to cheap, fibrous, saponin-rich vegetable by-products (such as beet pulp) that are used in lieu of whole vegetables in commercial dog foods.

Then there are the numerous scientific studies in which animal subjects suffered digestive distress when they ingested (or were force-fed) isolated saponin compounds in chemical concentrations far exceeding than those naturally found in yucca root, or for that matter, any other herb. Such an experiment, in my mind, only proves that animals (and humans) shouldn’t eat soap.

Saponin is found in many of the vegetables we eat and frequently feed to our dogs (including yams, beets, and alfalfa sprouts), yet a few outspoken individuals insist that anything that contains saponin must be harmful. This is simply not true. Virtually anything will produce a toxic reaction if ingested in too much abundance, including herbs and vegetables.

Common sense rules here. Too much of virtually anything will likely cause some sort of toxic reaction, and yucca root is no exception. Remember this: Yucca is also known as “soapweed.” If used in excessive amounts over an extended period of time, yucca may eventually irritate the stomach lining and the intestinal mucosa. This in turn may cause vomiting. In fact, many of the Native American tribes of the southwest used yucca preparations to induce vomiting in cases of food poisoning. If vomiting or any other adverse effect is observed, discontinue use.

Although yucca has become a popular additive in pet foods, I do not feed foods that contain more than two percent yucca root on a daily basis unless a therapeutic purpose for a higher dose has been identified by a holistic pet care professional.

It is best to follow the manufacturer’s recommendations of yucca supplements that are formulated specifically for dogs. Yucca products vary according to their concentrations and added ingredients. If the product you buy does not have a suggested feeding amount on its label, then call the manufacturer or shop for a different brand.

As a food supplement for dogs with suspected malabsorption: Mix ¼ – ½ tsp. of dried, powdered yucca root (available at health food stores) to each pound of food fed each day. Feed on a schedule of four days on, three days off each week; this will help prevent overstimulation and subsequent irritation of digestive tissues that may otherwise occur with long term use.

As an anti-inflammatory and tonic for dogs with arthritis: Use a liquid tincture product that has been specifically formulated for use in dogs, and follow the manufacturer’s recommendations or the advice of your holistic veterinarian.

Alternatively, an alcohol-free liquid extract can be used. Again, buy one that is formulated for dogs and follow the manufacturer’s recommendations.

Greg Tilford is a well-known expert in the field of veterinary herblism. An international lecturer and teacher of veterinarians and pet owners alike, Greg has written four books on herbs, including All You Ever Wanted to Know About Herbs for Pets, (Bowie Press, 1999), which he coauthored with his wife, Mary. 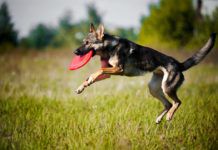 5 Reasons to Feed Raw Honey to Your Dog 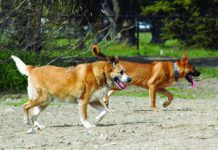 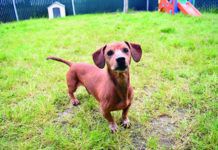