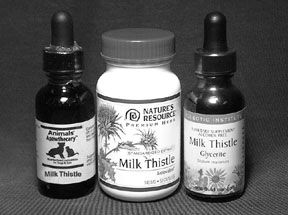 Milk thistle (Silybum marianum) is a flowering plant in the Aster family. A native of Europe, it has been used since the time of the Roman emperors as a liver tonic. Milk thistle is one of very few traditionally used herbs that has been widely accepted by conventional science to have significant medicinal value.

Silymarin, which is itself a combination of several other active compounds, has been extensively studied around the world, and has been shown to be safe and effective in treating a variety of liver diseases and other conditions. It specifically protects the liver against toxins (including some drugs and heavy metals), activates protein synthesis, and stimulates growth of new liver cells to replace those that are dead or damaged. Milk thistle also has strong antioxidant (destroys oxygen free radicals) and anti-inflammatory actions.

Silymarin reaches high levels in the bile and liver (it also reaches significant levels in the lungs, pancreas, prostate, and skin). It can be used in the treatment of hepatic lipidosis, chronic hepatitis, cholangitis (inflammation of the bile ducts), and pericholangitis (inflammation of the tissue around the bile ducts). It may be useful in preventing or treating gallstones by thinning the bile. Many dogs with inflammatory bowel disease (IBD) have concurrent inflammation of the liver/bile system and the pancreas. This suite of symptoms is called “triaditis.” Because milk thistle’s beneficial actions concentrate on the liver and bile systems, it may also be helpful in dogs with IBD.

Milk thistle should be considered as an aid to healing after drug therapy, vaccinations, and infections such as canine parvovirus, as well as an potential adjunct treatment for cancer. Researchers at Case Western University concluded from their work that “silymarin possesses exceptionally high protective effects against tumor promotion . . . ” One human study even suggests a role for milk thistle in diabetes mellitus through its normalizing effects on red blood cells. It may also help prevent diabetic neuropathy, a common complication of the disease that causes degeneration of the nerves controlling the hind limbs, which consequently produces weakness and an abnormal gait.

Milk thistle generally supports the immune system through its powerful antioxidant, free-radical scavenging action, its ability to preserve the supply of another important antioxidant, glutathione, as well as direct effects on immune cells. Glutathione, which is stored primarily in the liver, naturally declines over time, and depletion of this protein appears to accelerate the aging process.

While it’s not exactly the fountain of youth, milk thistle clearly has wide-ranging positive effects throughout the body. However, before you add this potent herb to your dog’s daily regimen “just in case” it might do some good, it’s important to consider that some herbalists believe milk thistle is best reserved as a treatment for existing disease, rather than being used by itself in a healthy dog.

While moderate use of milk thistle is very safe, there is some experimental evidence to suggest that long-term ingestion of very high dosages of milk thistle will eventually suppress liver function.

The standard dosage of milk thistle extract is based on a silymarin content of around 80 percent; most supplements contain anywhere from 50-500 milligrams (175 mg is typical). As with many supplements, it’s probably better to buy a milk thistle derivative rather than a silymarin-only or other fractional supplement, since there may be other compounds found in the whole herb that significantly enhance the effects of what science has decided is the main player.

Because of its excellent safety record and lack of adverse drug interactions, when I’m treating a very sick dog with advanced liver disease, I do not hesitate to use up to 200 mg per 10 pounds of body weight of milk thistle extract daily. For most canine purposes, however, one-third to one-half of that dose is more than adequate. (Dogs with liver disease typically will not eat, but it’s a simple matter to open up a capsule, mix the appropriate amount of powdered herb with a little blenderized food or baby food, and feed it to the dog in a syringe.) Too high a dose can cause an upset tummy, gas, or mild diarrhea; these are easily resolved by giving less.

The capsule form is easy to find – any health food store, and even most pharmacies and grocers, will have them in stock. The herb also comes in a liquid extract, but most human products contain a fair bit of alcohol. If you prefer a liquid preparation, get one specifically intended for use in animals.

One safe, reliable source of a liquid extract is Animals’ Apawthecary (available through some pet specialty shops and many mail order suppliers such as PetFood Direct (www.petfooddirect.com or 800-865-1333), PetsAge (www.petsage.com or 800-738-4584) or Morrills’ New Directions (www.morrills.com or 800-368-5057).

Jean Hofve, DVM, is a regular contributor to WDJ. Her veterinary practice is in Englewood, Colorado. 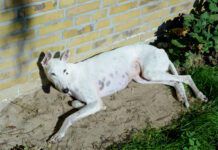