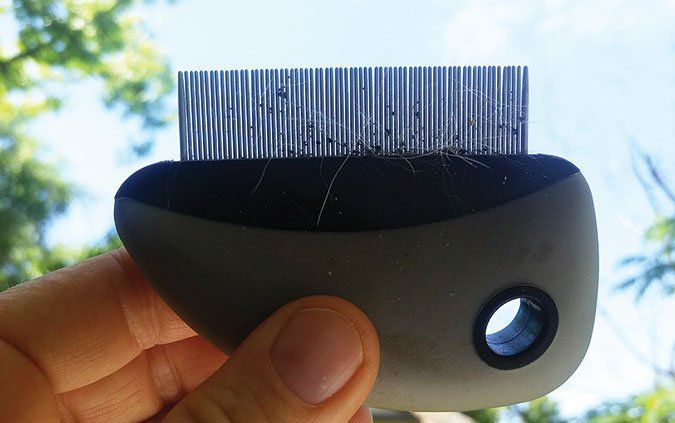 REMOVING FLEAS FROM THE HOUSE: OVERVIEW

1. A good vacuum is the best tool in the war on fleas. Vacuum your entire home thoroughly and deeply, concentrating on rooms and areas where your dog spends the most time.

2. Move furniture so you can vacuum underneath and close to furniture legs. Remove cushions and pillows from chairs and sofas, and use a crevice tool to vacuum deep in fabric folds.

3. Floors should also be vacuumed well. Focus on cracks in hardwood, laminate, or tile floors, and near baseboards.

4. Don’t forget to vacuum your car!

5. Wash your dog’s bedding frequently, at least once a week (but more often is better) in water that reaches at least 140 degrees for at least 10 minutes; bleach in the wash also helps kill flea eggs and developing flea larvae. Dry thoroughly at the highest heat setting.

6. Consider the use of an insect growth regulator to help break the flea life cycle in your home and yard.

Once upon a time, all commercial products that were intended to rid your pet of fleas focused on killing adult fleas. As the study of fleas advanced, researchers realized that killing the adults was never going to be quite enough; if even just a couple of fleas anywhere in a dog’s environment avoided getting killed by whatever insecticide was applied, the fleas could repopulate the area fairly quickly. Scientists began looking at how to control some of the flea’s other life stages concurrently.

Researchers learned that in a typical census of fleas in a flea-infested household, at any given time, the adult fleas would represent only about one to five percent of the flea population!

Where’s the rest of the gang? The studies indicate that, at any given time, flea eggs would make up about 50 to nearly 60 percent of the population in your home. Flea larvae would make up about 35 percent, and the pupae (a life stage of the flea that comes after larvae and before emergence as an adult) about 10 percent.

The job of ridding your home of fleas, then, really consists of taking on both the adults and all the other flea life stages. One could think of the non-adult phases of the flea as another species of pest, given that each stage has differing life needs and vulnerabilities. Because flea eggs, larvae, and pupae all have the potential for turning into fleas, destroying the insects in the non-adult stages is critical to preventing the population from repeatedly bouncing back into your and your dog’s lives. Here’s a primer on these non-adult stages and how they can be eradicated.

After adult female fleas feed and mate, they start producing eggs. They lay eggs on their hosts (generally, your dog, cat, or local wildlife), about 25 to 30 eggs at a time, but the eggs fall off within a few hours. The eggs can land anywhere, but most commonly accumulate where your pets sleep.

How to Get Rid of Flea Eggs

A powerful vacuum with a rotating brush (also known as a beater bar) is a powerful ally in the war on fleas. Frequently vacuuming the areas where our pets hang out indoors can remove a lot of flea eggs; flea eggs cannot survive the physical trauma of being vacuumed. The thicker or deeper your carpets are, the more difficult it will be to vacuum up all the flea eggs. Vacuum every two to three days for best results.

Flea eggs can survive being wet, but being washed in hot water (more than 140 degrees) and exposure to detergent (which can penetrate the egg’s outer “skin”) can kill flea eggs. Time in a hot clothes dryer will also kill flea eggs. Dessication (drying out) is more lethal to flea eggs than moisture. Desiccant carpet powders, such as food-grade diatomaceous earth and Flea Stoppers Carpet Powder (a boric acid powder), can help kill flea eggs.

Larvae are what you call the things that hatch from viable flea eggs. Get this: The freshly hatched larvae immediately start looking for and eating any non-viable eggs they can find, as well as the feces of the adult fleas. Yum!

It takes about six days to two weeks for the larvae to develop through three distinct larval stages before they may become a pupa. The larvae avoid sunlight, burrowing deep down into carpets or other substrates.

After they have molted three times, most of the developing larvae start spinning cocoons around themselves; the majority of the larvae develop into pupae in these cocoons, although some (called naked pupae) are able to transition without cocoons.

How to Kill Flea Larvae

Vacuuming can remove larvae from rugs, but the deeper your carpet, the less likely your vacuum will be able to reach the larvae. However, if a flea larvae doesn’t eat for three days, it will die, so vacuuming to remove non-viable eggs and flea feces (the main food sources for flea larvae) will help starve and kill the larvae.

Larvae like moist areas, but can drown if immersed in water for long. They can survive the usually brief “bath” they may receive from a wet mopping of a kitchen floor, but heavy rainfall outdoors would likely drown them. Water dissolves flea feces, though, so wet mopping can help destroy one of the flea’s food sources.

Flea larvae may able to survive a washing machine -but fortunately for us, a thorough drying in a hot tumbling dryer kills them. Drying out is more lethal to flea larvae than moisture. So, as with flea eggs, flea larvae can be readily killed by desiccant carpet powders such as food-grade diatomaceous earth and Flea Stoppers if the powders can reach the larvae deep in the base of your carpets.

Bad news: The developing fleas that have survived to the pupal stage are the hardest to kill and can survive for the longest period of time of any of the flea life stages.

Cocooned pupae typically develop into adults in seven to 19 days, but cooler temperatures can slow their development time. And once they have matured into adults, they may not leave their cocoons right away; they can stay quiescent in their cocoons for months, waiting for the right conditions and stimuli to emerge.

In more humid environments, the adults emerge more quickly; in dryer climates, the pre-emerged adults stay quiescent longer. The temperature also plays a big role in how long it takes the adults to emerge from their cocoons; in warm climates (think 90 degrees), most adults emerge within a week. At 50 degrees, it might take adults as much as 20 weeks to emerge.

Pre-emergent adult fleas can quickly emerge if they detect a nearby host. Pressure and heat – think, a dog sleeping on his bed – will trigger the adult fleas to emerge from their pupal cocoons. When they do emerge, they need to feed on a host animal within a week or they will die.

Getting Rid of Pupae

Cocooned flea pupae are tough. They can survive dry environments that would dryout and destroy their earlier life stages. Cocooned adults can survive immersion in water. If you manage to vacuum them up, they will die, but the cocoons are far harder to vacuum out of carpets than larvae and eggs.

In our opinion, every pet owner should have a flea comb on hand. These are small combs with teeth that are so closely spaced that when you comb through a dog’s coat, any fleas – or pieces of flea poop – that are present will get caught between the teeth of the comb. (Those dark little specks in the comb are flea poop. Where there is flea feces, there are fleas.)

Flea combs are invaluable when used as a surveillance tool, to help determine whether any fleas have established a beachhead on your dog or cat. And if you do find fleas, you can use the comb to capture the noxious little insects, removing them from your pet and dropping them into a glass of soapy water to drown.

We’ve known pet owners who were themselves chemically sensitive, or who had chemically sensitive pets, who relied on this tool alone to control fleas. It would be tedious, but it could work. Enlist a powerful vacuum in the war effort and the odds of your victory would improve considerably.

In the happiest of cases, a dog owner who finds fleas have cropped up in her home can use her powerful vacuum, washing machine, and dryer – and perhaps a single dose of a spot-on pesticide or oral flea-killing medication for her dog – and quash the uprising before a population can gain a foothold.

If the blood-sucking settlement has already gotten established in your home, but you are determined to avoid the use of toxic insecticides, consider using a product that contains an insect growth regulator (IGR).

IGRs are chemical compounds that mimic the natural insect hormones that control the insects’ growth and prevent them from maturing and reproducing. The Environmental Protection Agency (EPA) categorizes many IGRs as having “reduced risk” for human health and the environment. And insects are less likely to become resistant to IGRs.

IGRs can be used to control flea populations in several ways. There are topical “spot-on” preparations that contain insecticides to kill adult fleas and IGRs to prevent the maturation of any eggs or larvae. Flea pupae are not as dramatically affected as flea eggs and larvae. There are also IGR sprays that can be sprayed in the home and yard, concentrating on areas where household pets spend time.

The most commonly used IGRs for flea control are pyriproxyfen and methoprene.

There are also two prescription oral medications for dogs that contain insect growth regulators. Both are made by Virbac Animal Health of Fort Worth, Texas, and both contain the IGR lufenuron, formerly offered by itself in another veterinary prescription product named Program. Virbac discontinued Program, but rolled out Sentinel and Sentinel Spectrum. In our opinion, that’s a shame; we like the option of administering a targeted medication if needed, not the shotgun, multi-use approach favored by the drug companies.

Virbac says lufenuron controls flea populations – we would say, “helps control flea populations” – by preventing the development of flea eggs; it does not kill adult fleas. When a dog is fed a single dose of lufenuron, the eggs of any fleas who are present and feed on the dog will be prevented from developing for 32 days. Keep in mind, however, that using one of these products may pose side effects related to the insecticides they also contain. 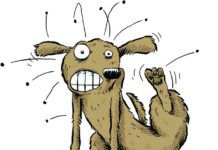 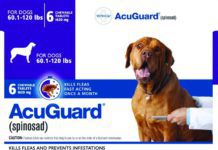 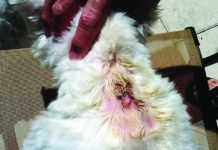