I was so pleased to receive my August issue containing a piece (“Your Dog Nose No Bounds”) about scent training, K9 Nose Work, and specifically reference to Jill Marie O’Brien and Amy Herot. I am currently attending one of their classes and it is truly amazing work. The concept that I love the best is that, while most other dog activities are micromanaged by the human, scent work is the opposite, allowing the dog to be totally a dog and be rewarded for following her instincts! I cannot wait to take my other dogs through the program.

I stumbled upon this sport by accident. I train dogs and also foster for a local rescue group; my current foster is Clara, a nine-year-old female Rottie. Clara had pneumonia when pulled from the shelter and had never lived indoors. Her nails were long; Lord only knows how she walked. She suffers from chronic arthritis and spondylosis. I wanted to offer Clara an activity that she could participate in but her physical limitations really curtailed what she could do.

While she moves uber slow I noted that her nose was always going full speed, sniffing the ground, checking the air, finding the latest hidey hole of our cat. Search and rescue and tracking came to mind.

I started asking around and was told to check online for a fun version of tracking – K9 Nose Work. A bonus: Jill Marie O’Brien is attached to it. I first met Jill Marie in 1999 when she temperament-tested my first bull breed rescue. I subsequently saw her at training/behavior workshops held at SPCA LA, where she is the director of training and behavior. Jill and Amy Herot co-teach and they are knowledgeable and informative about scent work.

When Clara came to our home in April she was grumpy and shut down, not very confident, and unsure about people. Attending K9 Nose Work classes has helped her personality blossom! It is a sport in which any dog can participate, whether a pure breed or mixed breed. It is perfect for Clara because she can work in the ring and check the boxes at her own sloooowww pace and gets rewarded for doing what she is already programmed and inclined to do anyway – smell!

Clara will not be going into K9 Nose Work competitions but she has become a winner by gaining confidence and a new interest in life and people. She now has so much more to take with her when her “forever home” materializes.

Your article about getting the family dog ready for children (“Family Planning,” August) sounds like my three-year journey with a rescue, Tibby, my teacher dog. I want to share a tip that turned her from a child-fearing snapper to a child-seeker. We had dozens of neighborhood children swirling constantly, a stressful situation for me and the dog. I had the children, one by one, hold (with both hands) a jar of meat baby food under the dog’s nose.

It worked because the child was engaged and not jumping around, waving his/her hands, making noise, trying to pet the dog, nor reach over her head. The children had to be still to hold the jar and were fascinated watching Tibby eat. They stood in line to get their turn, rather than crowd around the dog. The dog’s mouth was in the jar, rather than in the children’s hands (as it would be when taking a treat). The children learned that they could get Tibby’s attention by being silent and still. We now have a dog who tries to go up to every child she sees for attention.

In the 10 years I’ve subscribed to Whole Dog Journal (kept them ALL and refer often) I’ve never had anything hit as close to home as “Bleeding at Both Ends” (July). My Aussie, Cloudy, started with bloody diarrhea last Monday, then went the route with bloody vomit. First thing Tuesday morning, I was at the vet’s office; they heard “bloody diarrhea” and hustled her into a room to start testing for Parvo. Naw, it’s not Parvo, thinks I. After an x-ray, CBC, Parvo titer, subcutaneous fluids, and a bill for almost $600, we left with some Flagyl tabs. When I got home and e-mailed Cloudy’s breeder to whine, she essentially called me a ninny and told me to re-read “Bleeding at Both Ends.”

Okay, brain death sets in when I’m under stress. Then all the tests made sense and I settled down to care for my dog. Good thing I had Cloudy to practice on because two days later my Corgi went through the same ordeal. I’m in the 10 percent of “same household occurrences.” The article helped me understand and cope with what was happening. I’m most grateful that it allowed me to stop beating myself up trying to figure out what I’d done wrong. This week both dogs are happy and healthy. 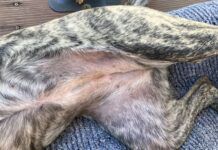 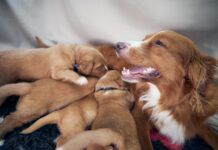