Home Blog What You Should Do (and Not Do) If You Find a Lost...
Print
Email
Facebook
Twitter 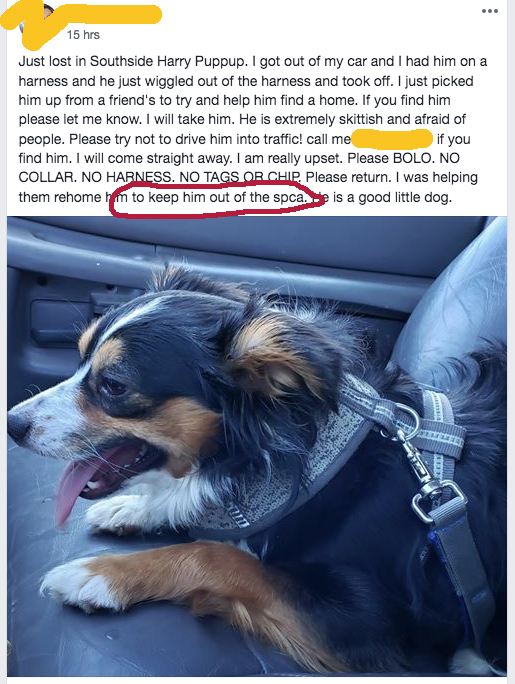 If you are a dog lover and you spend any amount of time on Facebook or any of those community website/discussion groups such as Nextdoor, you have probably seen some version of the post I saw this morning. Essentially: “I found this dog, he’s really nice, if you know someone who wants a dog please let me know, because I would hate to see him go to the shelter.”

I can’t tell you how crazy this makes me. I can’t help but imagine that one of MY beloved dogs has gotten lost, and I’m haunting the shelter every day, hoping someone has found my dog and brought him in so we can be reunited, but instead, because he’s so nice, someone is keeping him and trying to find him a home with someone else.

An even worse fate: someone “rescued” my lost dog – he was safe in their home – but then he “got away” from them in a panic. He’s now back at risk and perhaps even more wary of strangers than before, all because the finder didn’t want to take him to the shelter.

What Actually Happens to Lost Dogs at Most Shelters

I know that people believe they are saving a dog’s life by not taking him to the shelter. They automatically assume that any dog who ends up at the shelter is at high risk of being put to death. The thing is, in my community – in many communities today – that is really old information. Like, decades old. Any friendly dog who is brought into my local shelter is going to end up on the adoption row – and not all that quickly. He would likely spend at least two weeks or more among all the other “found” dogs before being made available for adoption. And if his owner was looking for him, this is THE place they would look – especially if they didn’t have a computer, weren’t on Facebook, weren’t reading the Nextdoor.com posts, perhaps didn’t even speak English.

I volunteer for my local shelter, and I see how many dogs are brought in as strays, I see how many dogs get euthanized (and there are some). I see that the shelter does not “euthanize for space” and no dogs, even fairly aggressive, hostile dogs – get euthanized in anything like the minimum hold time. In my area, there are people who own dogs who are aggressive to strangers but who are also beloved members of their household (scary but true), so even dogs who show a fair amount of aggression to the shelter staff are held for far more than the minimum time that our state requires they be held, in case their owner turns up. Friendly dogs absolutely will be held for weeks, then put up for adoption.

This is knowledge that I have gained with my own eyes, by volunteering in the shelter. What if I didn’t have the opportunity to learn this? What if I moved to a town and just didn’t know? Well, I would call the shelter and ask for information: “If I find a stray dog, and I bring him to the shelter, how much time would he have before he were at risk of being euthanized? And what can I do to ensure that he not be euthanized, if he’s not claimed by an owner?” I have actually seen the notation on cage cards at my shelter many times: “If not claimed by owner or adopted, (Name of person who found the dog, phone number) will adopt this dog.”

Other Ways to Reunite a Dog and Its Owner

What if you live in a community that is overrun with strays, and the shelter in that community kills dogs on day 5 (or whatever)? Again, you could – and should – at least take the dog to the shelter and have him scanned for a microchip. Then the shelter staff can take his photo and enter his information into their system as a found dog and you can still take him home (and, I hope, not allow him to escape again). This way, if someone comes looking for him at the shelter – which is the one place that most people will look for their lost dogs – the dog and owner stand a better chance of being reunited.

There are many more things you could do to try to find a “found” dog’s rightful owners: putting up signs with a LARGE photo of the dog, is perhaps the most helpful. (I will never forget my brother’s story: When his Ridgeback-mix, Hannah, took off once and hadn’t come back overnight, he busied himself the next morning with putting up “Lost Dog” signs, and came across a guy putting up “Found Dog” signs with his dog’s picture on them. He followed the guy home and said that Hannah looked very surprised and a little embarrassed when he came in the guy’s house to recover her.)

But please, whatever you do: Don’t just rehome the dog! 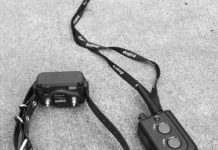 Nancy Kerns
0
There is a trainer I know who posts a lot of short videos of her own dogs and dogs owned by clients...