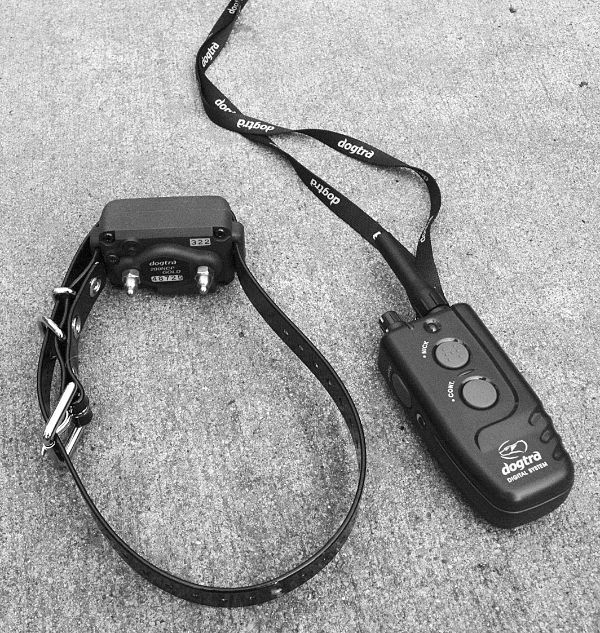 There is a trainer I know who posts a lot of short videos of her own dogs and dogs owned by clients of her board-and-train business. The dogs always look very well behaved and lots of people leave complimentary comments on these posts.

Again, judging by the comments, no one seems to be bothered by the subtle signs of stress and anxiety the dogs in training display. If the dog is “behaving,” the trainer never raises her voice, and the dog’s tail wags at some point, it all looks good to most people (apparently).

Now, it could be that some people DO comment or ask questions about the collars and the trainer deletes them. I would put money on a different possibility, though; I’m pretty sure that this trainer so thoroughly believes in and relies upon the collars that if someone DID comment, she would strongly defend their use.

Quick-fix methods can be seductive, but…

I know that quick-fix methods are seductive: “I sent her an unmanageable dog who barked at the door, jumped on everyone, and couldn’t be walked on leash, and two weeks later, now look at him! He’s calm and I can walk him without being dragged down the street!”

But my question is, at what cost? What was that dog’s total experience? A dramatic transformation does not happen that quickly without a certain amount of pain and discomfort and lack of initial comprehension.

Note that I’m not talking about the use of a shock collar to deal with a specific behavior that the owner or training has been unable to stop in any other way, something that may well shorten the life of the dog if the behavior is unchecked, such as taking off after animals (not responding to a recall cue off-leash) or failing to respond to a “leave it” cue in rattlesnake country. That’s a separate debate we could have. But what I’m talking about here is the use of a shock collar to teach dogs to perform every sort of sit, down, stay, come, go to your bed, every-day type of behaviors – the same behaviors we can teach 8-week-old puppies to do on cue with a handful of cookies.

Now, I have to add that this trainer is skilled and experienced. I don’t see the kind of obvious fear that an unskilled force-based trainer induces in his clients’ dogs – the videos posted on social media don’t show dogs who are overtly cringing or flinching. They do show dogs who display more subtle signs of stress: licking their lips, ears back, tucked tails, yawning. In a few videos, it takes a sharp eye, but you can see the reaction a few dogs make when they have hesitated to perform the requested behavior and are being shocked:  a long blink or a momentary grimace before they perform the behavior they have been asked for. You can see it, but only if you know what to look for.

I bet her clients are genuinely happy with the results – pleased to discover that their dogs are capable of being calm and compliant and have learned a few behaviors on cue.

There is no denying that in the hands of an experienced trainer – an even-tempered person with superior skills at observing body language and good timing – collars that shock or apply painful pressure to the dog’s neck can teach a dog to perform certain behaviors (in order not to suffer a painful consequence) in fairly short order, and without the appearance of violence. But this sort of training is anathema to me, and to most “positive only” trainers, for many reasons. Here are just a few:

In my view, the introduction of a button that is pressed to cause discomfort that will increase compliance from another living being – just this, alone – would indicate to me that the button-presser should spend his or her time with a stuffed or electronic toy dog rather than a thinking, feeling being of another species.

Again, I don’t like to discuss training methods that we would never promote, but I’m not sure that novice dog people are ever told about the potential for harm that quick-fix tools like shock collars can cause. And when a dog owner with an unruly dog sees the “before and after” videos, many happily sign on, without being informed about the potential for fallout. They probably haven’t been told up front that the dog’s seeming calmness and compliance comes with a remote control – one that they will have to learn to utilize in order to maintain those behaviors. Were they asked if they are willing to continue to hurt their dogs into the indefinite future? Or have their dogs learn to associate them with the pain?

The goal of the kind of dog training we describe in WDJ – dog-friendly training, positive-reinforcement-based training, fear-free training, call it whatever you want – is to cultivate communication with and cooperation from our dogs, not just assert control through superior strength or power. Communication and cooperation with other beings is most soundly built on a foundation of mutual comprehension – and this takes a little bit of time! But if the process of learning about each other is rewarding and enjoyable for both parties (canine and human), the bond between them will be strong, even if communication breaks down at times.

Let’s talk about it

*Please note that this place on the WDJ website – the blog spot – is where my personal thoughts are posted. The word “blog” is short for “web log”; it came into being to describe the sort of sites that were devoted to journaling and other personal posts. This isn’t an “article” about the evils of shock collars; it’s where I am trying to work out my personal discomfort with both the use of the tools and the general public’s seeming inability to detect or understand the potential for quite serious fallout from their use and misuse.

Trainers: Do you have personal experience with using shock collars for training garden-variety behaviors? (Let’s confine the discussion to this.) Do you have experience working with dogs who were shocked by different trainers or owners before you were consulted? If so, what can you tell us about these experiences?

Owners: Have you paid someone to train your dog with one of these devices? Were you told up-front that a shock collar would be used on your dog? What has your experience been? Has your dog seemed different in any way?