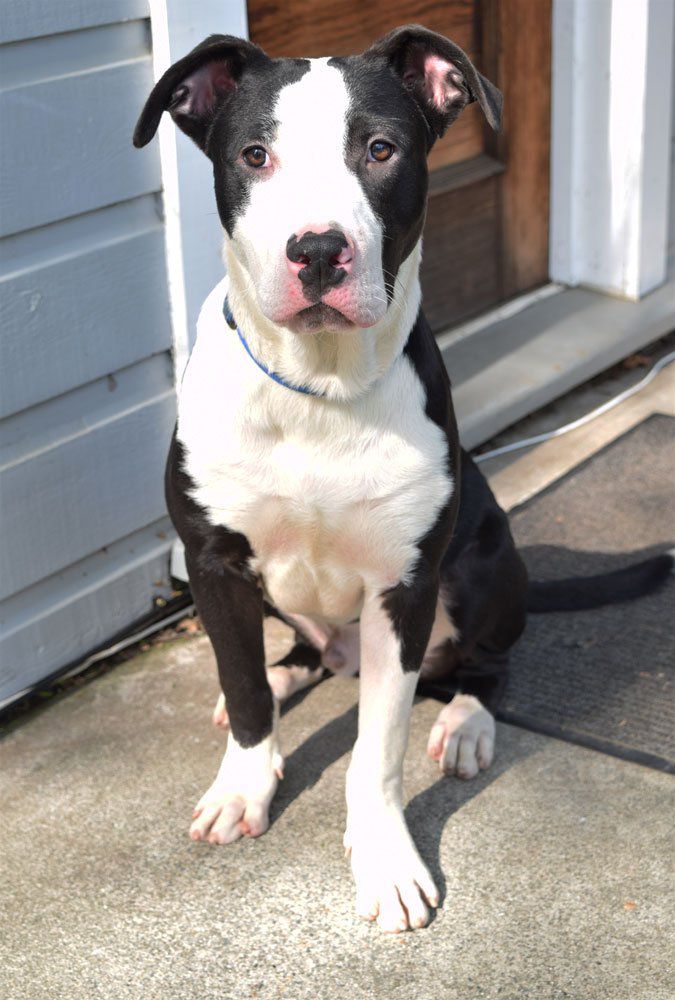 There is a behavior that the vast majority of humans reliably demonstrate when meeting an unfamiliar dog or puppy: they will tell the dog to “Sit! Sit! SIT!” Even without any evidence whatsoever that the dog understands the word, people will repeat it again and again, and say it louder and more emphatically, seemingly certain that the dog was too distracted or just didn’t hear them. It never seems to cross their minds that the dog doesn’t fully understand what the word means.

It is a testament to our love for and comfort with dogs, I guess, that we so often assume they understand our language. But why do we so often expect a strange dog – or as an even better example, a young, untrained puppy – to understand “Sit!” I find it so aggravating!

Why do I even care? For two reasons:

1. People often get physically forceful when a dog doesn’t understand and comply with the “command.” They’ll snap their fingers to get the dog’s attention, and say it more firmly. “SIT.” And then they’ll often reach for the dog’s rear end and start pushing.

I can’t count the times that I’ve been with people in the “get acquainted” room, as a volunteer with my local shelter, introducing a dog or puppy to prospective adopters, when someone starts with the “Sit! Sit! SIT!” thing – almost always immediately followed by someone attempting to push the dog or puppy’s butt down onto the floor.

This is just not appropriate – and it’s a great way to hurt an older, arthritic dog, or frighten a scared dog into feeling like he has to defend himself with a growl or bite. It also abruptly changes the relationship between the person and the dog; with that single gesture, the person has aggressively made it clear that he or she is physically more powerful than the dog and completely uninhibited about using that physical force. Some dogs are completely okay with this; some might accept it from someone they know and trust; and some have no foundation of kindness from humans to understand and accept this calmly and without fear.

Whenever I see someone push a puppy’s or dog’s butt to the floor, I ask her how she would feel if I put my hands on her shoulders and firmly pressed her down into a chair. Would it matter if I were smiling and cooing at her when I did it?

2. Here’s the second reason I hate it when people repeat a word they mean to be a cue to an animal who clearly doesn’t know it, or can’t demonstrate at that moment that they understand – and this is a little out there, but follow me for a moment… It demonstrates an unexamined expectation that the dog should know this cue AND comply, no matter who uses the cue or when. If you think about it, it’s a completely racist – species-ist  – expectation. We humans EXPECT dogs – strange dogs, baby dogs, ALL dogs – to do this one thing when we say they should. But why? We wouldn’t dream of saying the same thing to a CAT we just met! And pushing its butt down when it didn’t sit! We don’t do this to chickens, or goats, or guinea pigs, or parrots.

Think about it: We don’t do this to ANY OTHER ANIMAL! Just dogs are singled out for this expectation – and many, many others. I think most people would immediately understand that they need to manage, train, and condition ANY other species of animal to go along with the things we routinely just expect dogs to do, including cooperate with baths, intimate grooming and touching, riding in cars, getting along with other dogs, and so on.

Anyway, I should also add that I DO often say “Sit!” to dogs I don’t know – but I do it for the same reason that I would say “Hello!” to a strange person: to get information, NOT to “order” him to do something.

I can usually tell from a person’s response to “Hello!” whether we speak the same language (or not), or whether the person is even willing to have any sort of communicative exchange with me. Similarly, I can usually tell from a dog’s response whether he has any interest in “speaking”‘ with me, and if so, whether we might have any language in common. A dog who looks like he might know what “Sit!” means and is willing to comply is the equivalent of a person who responds to “Hello!” with “Hi, how are you?” To me, it means that we can start to have a conversation in the same language.

And if a dog responds to “Sit!” as if he has never heard the word before, then I know I have to behave in the same way I would with a person who speaks NO English, with a big smile and lots of gestures and making no assumptions whatsoever about what the person was getting out of the conversation. And a lot of letting him know how much I appreciate him for “speaking” with me.