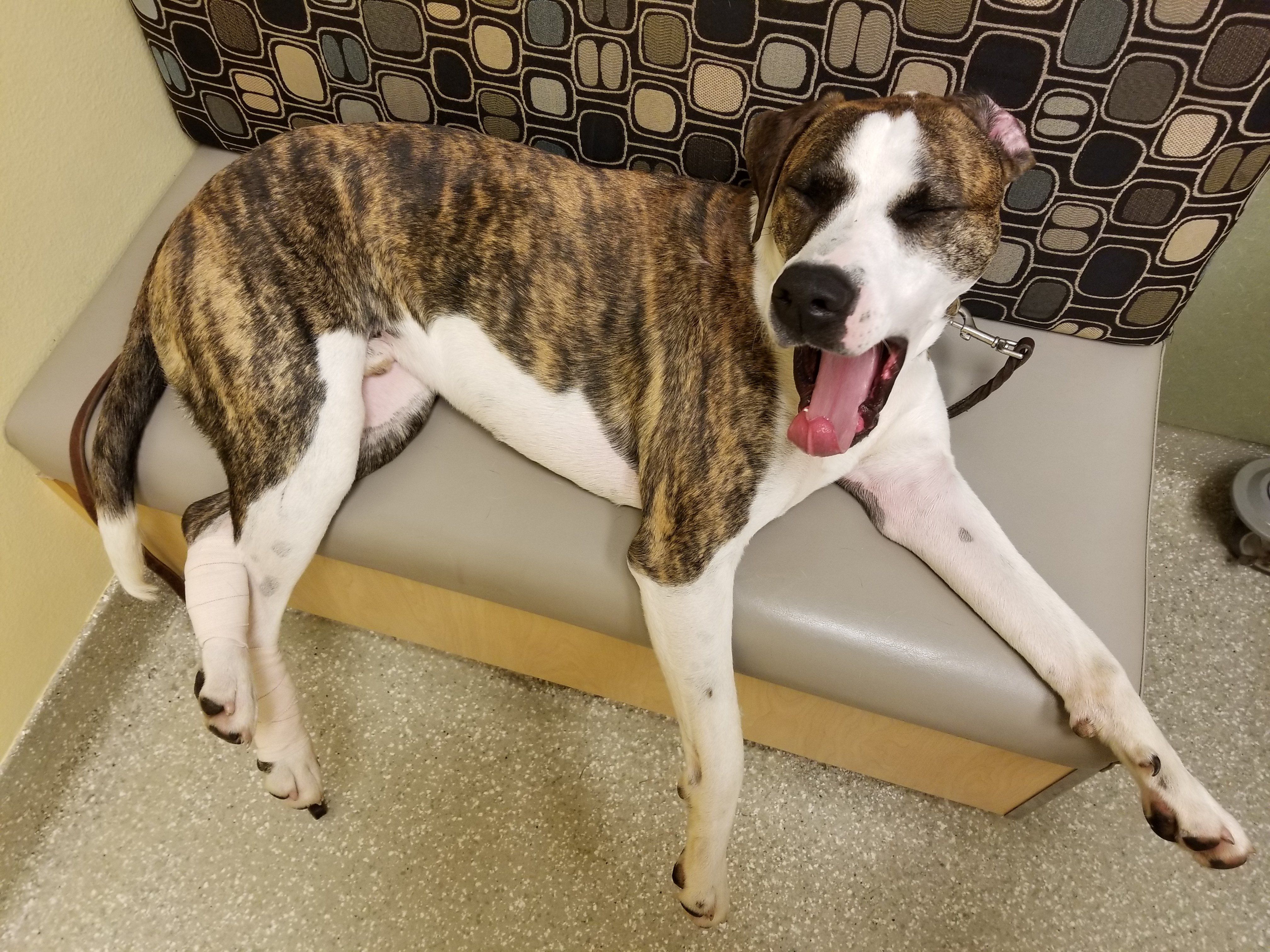 Now that we live in a house with two glorious acres of grassy field and a nice front lawn, Woody is finally getting all the fetching time he wants. He intercepts my husband and me every time we walk outside, with a ball or flying disc, asking us to please throw it, and the farther the better. We’re happy to oblige; it’s glorious (at least for a dog lover like me, though my husband seems to like it too) to watch this strong, athletic, healthy dog run hard, scanning the sky for his fetch object, and then launch himself into the air to catch it. Woody’s leaps are not always perfectly timed, but they are always athletic, and he lands gracefully every time, coming back without fail to ask again for just one more throw, please.

We always try to throw his fetch item du jour in a location where there are no obstacles for Woody to crash into or trip over in his single-minded pursuit. For example, there is a segment of fence that used to separate the property around the house from a pasture. It has several openings now; there hasn’t been an animal in the field for some time, and the fence was removed in places. But there is an opening right near the toolshed, so when we are going into or out of the toolshed and are greeted by Woody with his fetch item, we often lead him through the gap in the fence before throwing the thing out into the field – otherwise, he just may whirl around and run RIGHT into the fence or fence post in his haste to fetch. He did it once, sickeningly – running right into the wire mesh he forgot was there. He fortunately bounced right off of it without injury, but both my husband and I shuddered to think of what would have happened if he had run into the metal fencepost. So we are getting more and more careful, as we discover all of the potentially injurious places for Woody to run at full tilt.

(By the way, where is Otto while all of this wild fetching is going on? He’s walking the property in his stately way, soaking up the sun, chewing on grasses of various lengths and textures, smelling the tree trunks for scent of squirrels, marking the fence posts where any dog any time ever has peed before him… you know, important grown-up dog stuff. He’s enjoying the property, too. He’s just not, in his words, “a mindless fetcher.” Oh, sure, he will retrieve something, once in a while, but it’s on his terms. And he’s prone to suddenly losing interest in the game, in favor of that squirrel scent. He’ll just drop the ball and wander off. “Sorry, guys, I have to go back to work. Enjoy your little game.”)

You know already what this is leading up to: a fetch-related injury. Fortunately, not a terrible one, but nevertheless worthy of a trip to the veterinary ER, given its late hour.

I got home from work and grocery shopping at about 9 pm, and was greeted joyously at the driveway gate by both dogs, Otto, with his characteristic “Oh wooooooooooo!” Wookie-like noise, and Woody, with a flying disk in his mouth. I got out of the car, greeted Otto, took the disc, threw it hard into the field, got into the car, drove it through the gates and parked it, got out of the car, greeted Otto again, threw the disc again out into the pasture, walked over and shut the driveway gates, then more Otto petting and one more throw for Woody. Grabbed the groceries, came into the house, fed both dogs, and noticed that Woody’s legs and feet were all muddy (digging while I was gone, no doubt, and fetching) while I put the groceries away and put some broccoli on the stove to steam. Both dogs finished eating, and lay on the kitchen floor, forcing me to step around them while I – WAIT. Why is there blood all over the floor? Who is bleeding? And from where??

It took only a minute to trace the blood to its source: the backs of Woody’s hind legs. In horses, we’d call this area his pasterns: between his paws and the knobby hock joints – the place where he skids when he’s sliding to a halt from a run. On one of those three throws into the field, he obviously skidded into something sharp in the ground. He had two ugly, deep cuts, one on each pastern, with mud packed into each wound. So much for dinner!

I took him outside, hosed off all of the mud, brought him back inside, and started cleaning the wounds. It took only a few minutes to conclude they were deep enough that they should be stitched or stapled closed (not to mention cleaned more deeply than I felt comfortable doing).  So off to the emergency clinic we went.

The best news: Though the technician who first examined Woody gave a worse-case estimate that would cost more than $1,000 (in case he had to be fully anesthetized in order to clean and stitch the wounds), the veterinarian was able to use just a local and dog treats to gain Woody’s cooperation and treat his wounds. She shaved the areas, irrigated and scrubbed the wounds more deeply than I was able to, used two staples to close each gash, and wrapped each leg in layers of dressing, gauze, and a wrap. She sent us home with an antibiotic and an anti-inflammatory. The total was only $331 – a bargain for care at that hour, as far as I’m concerned.

Woody’s pet insurance policy made me feel calm at the prospect of our trip, even before I knew the total, and even when I heard the technician’s worst-case estimate. I pay $55.25 a month for his policy; it has a $250 a year deductible, but reimburses me for 90 percent of each vet bill after that $250 is used up. So in that one visit, we’ve taken care of the deductible for the year. Nationwide will reimburse me for 90 percent of the $81 left over, or $72.90. That also means that the company will reimburse me for 90% of any other care he needs this year – and knowing Woody, he will need further care this year.

However, I will hope and try for no further injuries caused by fetching. I have to do more surveillance and marking of hazards in the field. And I probably ought not have him fetching at night, so I can make sure I’m not sending him racing toward a hazard I can’t see. Yet another dog-owning lesson learned. When will my education end?