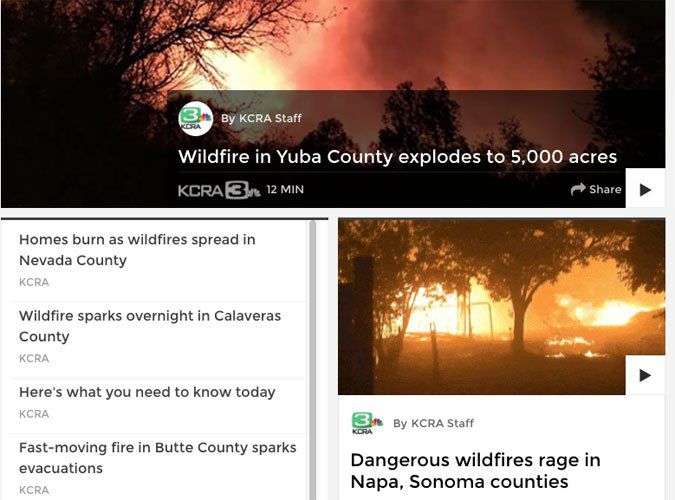 This past week, we’ve had some terribly windy days. In the wee hours of Monday morning, I woke up to a strong smell of smoke in the air. I stepped outside; the odor was strong but I couldn’t hear sirens nor see the glow of a fire anywhere. I turned on my computer, and was immediately able to find news about the source of the smoke: a wildfire had broken out about 10 miles north of my town. Another was burning about 20 miles to the east. My town was safe – but oh my word, there were also enormous fires burning 100 miles away, in the heavily populated areas of Napa and Sonoma Counties. And the wind was still gusting at 50 and 60 miles per hour, spreading burning embers far, wide, and fast.

As I type, tens of thousands of people have had to evacuate their homes and businesses, and hundreds of homes and businesses have burned to the ground. Thank goodness, I’m seeing reports from dozens of friends and acquaintances from that area, reporting on Facebook that they were able to get themselves and their human and small animal family members out of the burning areas safely. But I am aware that there are lots of family farms and horse boarding facilities in the area that’s burning – even a tourist attraction called Safari West, which has zebras, giraffes, rhinos, cheetahs, and other African animals on the property. I shudder to think about all the large animals in that area who can’t be evacuated quickly or easily.

This, as well as the hurricane-related disasters that have struck the Gulf states in recent months, has underlined for me the importance of having an emergency plan in place to protect and evacuate my family. What would I do if I had only minutes to leave my house? What would I grab?

What would I do if I had a little more time – if my area was on an emergency evacuation warning, as it was back in February of this year, when part of the infrastructure of the enormous dam I live downstream from started showing signs of failure?

In the former case, I’d need only some leashes, a cat carrier, the dogs and cats, my husband, and maybe that little emergency radio we got when we pledged a donation to our local public radio station that time. It can run on batteries, solar power, or be wound up by hand; it can even help charge a mobile phone (of course, I’d grab my cell phone, too). I had better dig it out of the kitchen cabinet and put it on that shelf by the front door.

I’ve already had practice with the latter case -with hours and even days to get ready. When the broken spillway at the Oroville (California) Dam caused erosion that threatened to undermine the massive structure itself, local officials had advised residents to be ready to evacuate if needed. My husband and I spent the better part of a day packing up family photos, legal documents, passports, computer backup drives, veterinary records, and other possessions into big plastic storage boxes, and stored them in a friend’s barn, upstream and uphill from any potential flood. I had dog leashes and food in my car . . . but then I made the mistake of leaving town (to care for some evacuated animals!) and was 20 miles away when the actual evacuation order came. It took over an hour of panicked calls and texts to reach my husband and make sure he grabbed the animals and got out of town safely (I wrote about that event here). My new rule: Don’t get separated when a potential disaster is at hand!

Here are some good resources online for disaster planning: