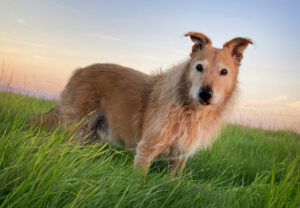 My 14-year-old dog Otto is starting to show signs of age-related dementia. While there are all kinds of ways dementia in dogs can manifest, his symptoms are most similar to what’s often called “sundowning” – where elderly humans seem pretty much okay in the early part of the day, but show increasing confusion, anxiety, and/or restlessness in the later afternoon and evening. It’s not been fun, but my husband and I are trying to adapt and accommodate his need for attention and comfort – but also meet our own needs for sleep!

It started in early November. A couple nights in a row, Otto woke me up in the middle of the night by coming into my bedroom (he and my 6-year-old dog Woody usually rotate between sleeping on the giant dog bed and the couches in the living room). On those nights, Otto approached my bed, panting loudly and clearly in distress. He’s done this dozens of times before, but always for one of a few reasons:

But in the case of these nights in early November, he wasn’t trembling in fear, the way he does if he hears fireworks or other loud BANGs, and when I got up to let him outside, he didn’t run off to relieve himself OR go charging off into the night barking, as he would have if had detected suspected intruders on or near our property. He just went outside and stood there, looking around, and then came back inside. And then just stood there, looking at me intently. When I told him to “Go to bed! Go lie down!” he did, but a few minutes later was back in my bedroom, panting loudly in my face, wanting … something! But what? Not food, not water, not to go outside. It seemed like he just wanted attention.

To allow my husband (at least) to get some sleep, I took a blanket to the couch and encouraged Otto to lie down next to the couch (he doesn’t like being on the couch as the same time as anyone else, human or canine). He would be calm as long as I was petting him and rubbing his neck and especially behind his ears (his long-time favorite spot), but if my hand would stop moving as I was falling back asleep, he’d loudly start panting and/or get up and start pacing around the house again.

That happened two nights in a row, and then for several nights, Otto was quiet all night. Then I left town for a few days, and on the last night I was gone, Otto’s nighttime restlessness returned. This time, my husband had to deal with it all alone. He, too, resorted to sleeping on the couch with one hand on Otto, but didn’t get much sleep. We discussed it when I returned the next day, and I called around to see if I could get Otto seen, soon, by any one of the three veterinarians I am currently using (last week, I described my three-vet regimen here).

The first vet who could see Otto suggested we run tests on his blood and urine, to look for clues of anything physical that might be amiss. Only one thing was out of whack, and it was a head-scratcher: Otto had a urinary tract infection (UTI). While these are common in older female dogs, it’s a bit unusual in male dogs. We added a urine culture test, to determine which specific bacteria was in Otto’s urine, and, while waiting for those results (which take a few days), we started him on a course of plain-Jane antibiotics.

The veterinarian also thought it was possible that the non steroidal anti-inflammatory drug (NSAID) that Otto receives wasn’t doing enough to relieve his arthritis pain, so we added gabapentin to his medication list.

When the urine culture came back, it showed that the bacteria in Otto’s urine was e. Coli – the most common culprit in canine UTIs, but again, much more common in females than males. He finished his antibiotic– unfortunately, without any appreciable change in his anxious nighttime behavior. We waited a week after that, and then I took him back to the vet to have his urine tested again. He still had bacteria in his urine! So we started him on another, more aggressive antibiotic,and the vet suggested I make an appointment with our vet who is board-certified in internal medicine, and perhaps do an ultrasound on his abdomen and particularly his prostate. Apparently, bacteria that gets into the prostate of older male dogs can be difficult to budge, and if this was the case, Otto’s prostate would have been inflamed and enlarged.

Nope, the ultrasound found nothing unusual. As before, he finished the prescription, we waited another week, and tested his urine yet again. Thankfully, this time, the infection was gone – but his nighttime restlessness was still present, even with the addition of gabapentin (and an increased dose).

It was then that I remembered I had a copy of a great book about canine cognitive dysfunction. Remember Me?: Loving and Caring for a Dog with Canine Cognitive Dysfunction (2016, Bright Friends Productions), was written by Eileen Anderson, an award-winning dog blogger who writes about canine behavior and learning theory (and a contributor to WDJ). I pulled the book off of my shelves and read the book cover to cover. It helped me realize a few key things:

While Otto is certainly showing some symptoms of this disorder, and while his frequent nighttime perambulations are disruptive, these behaviors are not as severe as they can become. As Anderson describes in the book:

The types of problems associated with canine cognitive dysfunction are often represented clinically by the acronym DISHA. DISHA stands for:

Interactions with people and other pets that have changed

Anderson included a link to a website she maintains for sharing information about canine dementia. On the site is a long checklist of symptoms that dogs with dementia can display; visitors to the website can print out the list and check the symptoms their dogs are having. This can help the dog’s veterinarian understand the full array of behaviors a dog is exhibiting.

As yet, Otto is exhibiting only a few of these behaviors, and only at night – and none of the ones that seem like they would be making him suffer (such as getting “lost” in our home, “stuck” in corners, being unable to eat or drink, or falling off of things). I’m talking to my veterinary team about what sort of enrichment, foods, supplements, and/or medications we can try to preserve his brain function, and have taken him to see our  third veterinarian for some acupuncture.

If your dog is elderly and exhibiting signs of dementia, I’d strongly recommend Remember Me? as an information resource.