My grandson Liam doesn’t really like dogs all that much. Maybe that’s too strong; he’s more or less indifferent to dogs, though this attitude can tip over into mild interest at times – mostly to humor me, I think. I think the genes for this indifference came straight from my husband, who has a friendly, “roommate” sort of relationship with my dogs, and tolerates my foster puppies, but who would probably be happier if I had no dogs at all. My husband’s son (my stepson) professes to like dogs more, but not enough to own one. (My own son is as dog-crazy as I am, and so is his fiancé, so I have high dog-hopes for my genetic grandchildren, if and when they may arrive.)

My husband and I are fortunate to have the opportunity to have Liam come from the East Coast and stay with us for a period of time each summer – and we pull out all the stops to make sure he has a memorable time. My husband built a massive treehouse for Liam when the boy was just six years old (he’s nine now). We have a trampoline, a super fun rope swing where Liam spends practically an hour a day, and last summer, we built a 150-foot zip line from the tree house to the other side of the pasture. We take him swimming someplace (various town pools, the nearby lake or river) almost every day, and we read together almost every night. We treasure every single day we can get with him.

Someone else here does, too: my almost-six-year-old dog Woody. In Liam’s memory, Woody has “always” been here, like the furniture. But in Woody’s mind, Liam is our most special visitor. When we came home from the airport with Liam earlier this summer, Woody practically levitated with joy, leaping around the kitchen and trying to smother the travel-weary boy with kisses. I know when Liam’s feet have hit the floor out of bed every morning, because I will see Woody grab a toy and race to Liam’s bedroom, greeting the boy with a strong tail-lashing and wiggles and moans of excitement before Liam can rub the sleep out of his eyes – that is, I saw this every morning until Woody started pushing Liam’s bedroom door open every night and joining him on his bed to sleep. Woody’s adoration of the boy is unconditional.

The funny thing is, Liam acts like he barely notices Woody, or, when he does notice the big dog’s excited greeting, he tends to push Woody away with an annoyed-sounding “Go AWAY, Woody!” In truth, I know he likes Woody and feels safe around him; if a movie we are watching gets at all scary, Liam will unconsciously slide off the couch and go sit next to Woody, or lay across Woody, on whatever couch Woody is currently on. And when we go swimming at the river, if he’s at all worried about the current, Liam will call Woody to his side, knowing that he can grab Woody’s tail and get a strong tow to shore with the muscular dog. But through most of the day he ignores Woody, and the fact that Woody is always following him around.

I don’t usually foster dogs or puppies when Liam is here, because we often travel with him, but my shelter is full to the brim right now, and a young litter of eight puppies – and no mom – were brought in by someone who told the shelter he “found them under his house.” (I can’t tell you how many times I have heard this, and I always worry and fret about the poor mother dog, whether she was truly a stray or an owned dog, whose pups were presumably all stolen from her overnight.) This time, when the shelter called looking for fostering help, we had already done the travel we planned to do with Liam, so I said I’d take the pups until they were at the age of adoption. Besides, it was a good opportunity to model some community service to Liam – and to compel him to help with said service. He’s been helping me feed the puppies and herd them from place to place on the property, as the temperature requires (into my office for mealtimes and during the heat of the day, back outside into a pen under the big oak tree the rest of the day, when we’re not playing with them on the lawn). And he helped me round them up and get them in the car to take them back to the shelter for their first vaccinations and deworming.

Over a series of weeks, Liam has seen their development from barely conscious little grubs, who waded into the pans of formula and soaked kibble and had to be wiped clean afterward, to curious little explorers who can run in all directions and are learning to sit on cue for treats. Helping me with their care tasks, he’s made observations (“Gosh, we have to do EVERYTHING for them!”) that have led to good talks about the role of parents and other caretakers of small beings.

He’s seen with his own eyes how little ones can lack certain skills or cognitive abilities one day and suddenly have them the next. This came up as we discussed the pups’ early inability to recognize the hazard presented by edge of a concrete slab, about a foot off the ground; a week or so later, he realized that the puppies had developed the awareness of its danger, and they would avoid it – and a week later, he saw that the small “cliff” had morphed into a fun obstacle for the puppies to overcome, up and down, many times a day. (This led to some very pertinent talks about the development of good judgment as it relates to personal safety and gravity.)

He’s asked endless questions about “if they were humans, how old would they be NOW?” He’s obsessed with what age they will be when they are “older” developmentally than him – a fascinating thought!

I’m not sure that Liam will ever be a “dog person,” but I’m thrilled with the brain development and dawning social consciousness he’s gained from puppy care this summer. (And for his help!) 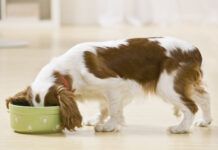 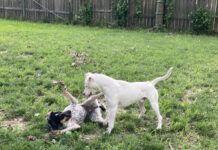 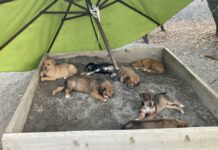