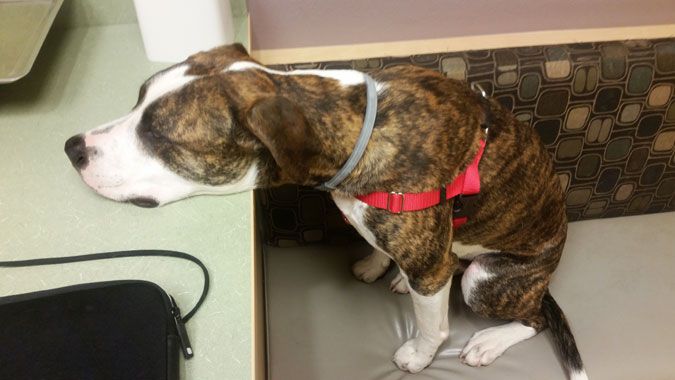 When was the last time you needed to take a dog to the veterinarian after regular business hours – you know, in an emergency? In the past few years alone, I’ve taken dogs (foster and my own) to the closest hospital providing 24-hour emergency services at least a half dozen times, for a puppy with a suspected broken leg (it wasn’t), a puppy with an injured eye (remember Odin? He eventually had to have the eye removed, despite prompt and lengthy treatment), and several times for my dog Woody, who has had after-hours treatment for lots of things.

NOTHING happens to Woody during regular hours! He’s needed stitches (cut his back legs on something while skidding to a stop playing fetch), swallowed a small tennis ball (they made him vomit it up), had a suspected bloat (he had gotten into the foster Great Dane puppies’ food and ate way too much, but was able to start pooping and get relief while we waited for service), and one night, he tanked with a sudden fever and vomiting and diarrhea (not sure what that was, but he was hospitalized overnight on fluids and antibiotics and recovered).

It’s been a couple of years since he’s needed emergency care – KNOCK WOOD – but if you have an accident-prone dog like Woody, take note: Many veterinary hospitals who ordinarily provide 24-hour, emergency services have begun suspending those emergency hours and overnight service. In my area alone, the closest three hospitals I could take a dog or puppy to in the middle of the night have suspended overnight service indefinitely. All three are citing staffing shortages as the reason for this. If something happened to my dog tonight, I’d be driving about 80 miles to the closest emergency vet hospital still operating overnight – and, presumably, so would a lot of other people whose hospitals did the same. The domino effect here, alone, is terrifying to ponder, with so many cases flowing to a few concentrated emergency-care providers.

I was first alerted to this by a friend who forwarded an email that one of her training clients had received from the emergency care provider in our area, stating that the hospital was closing at 9p.m., and no longer available for emergency care until 7 a.m. Since my trainer friend also provides boarding services, and needs to be able to take clients’ dogs for care in case of an emergency, she started calling around to see if the next closest emergency-care providers were available. That’s when she discovered that two more had followed suit and suspended their overnight emergency services. All three hospitals are citing staffing shortages as the reason for the suspension.

Shortly after I learned this, I saw an article (linked here) posted on a friend’s Facebook page, discussing the suspension of emergency veterinary services by a BluePearl Pet Hospital in North Seattle. Several friends of my California friend commented that the same thing was happening in their towns – in Colorado, New Jersey, Oregon …

So, just a heads-up: It might be worth a call to whatever veterinary hospital you usually go to in case of an overnight emergency, to check to see if they are still providing service after regular business hours. If they are not, it’s better to know now, so you’d know where to go in case of an actual emergency without a last-minute panic.