The news that I’m keeping my former foster puppy is leaking out. I loved him from the get-go, when I agreed to foster him for my local shelter, back at the beginning of March. The reason I didn’t just immediately decide to keep him was that I wanted to give my senior dog, Otto, extra consideration. No old dog should have to spend his or her last days being harassed by a rambunctious puppy – or perhaps a slightly disrespectful one.

But as it turns out, though 14 ½-year-old Otto doesn’t particularly like Boone (the new puppy’s name), he doesn’t seem to mind him, either. He mostly ignores most other dogs, just as he did with Woody, my six-year old dog, when he was a puppy. The difference is, Boone has another playmate: Woody! As much as Otto ignores Boone, Boone ignores Otto, and focuses all his love and mischievousness on the younger dog.

The one time Boone and Otto are ever proximate is when I work with Boone on good-manners behaviors. As soon as Otto sees someone getting treats for sits, downs, or stays, he comes a-running to get in on the fun. When he was younger, he’d be the first to hit the floor on the “sit” and “down” cues, like the smarty-pants kid, jumping out of his chair to raise his whole arm, frantic to let the teacher know he knows all the answers to all the questions the teacher asks the class. Today, he crashes our “classes” to demand treats – but often doesn’t even bother hitting the sits or downs! He’s playing the “senile old man” card a lot – and, because of his arthritis, I let him get away with it, most of the time. As long as he waits his turn and doesn’t interrupt the pup’s learning, he “earns” many treats for just being his usual handsome self.

As this spring warms into summer, Otto spends most of the day in his shady sandbox, which we keep nice and damp for him. He’s been insisting on spending a lot of his nights out there, too. I’m not crazy about him being out all night – especially since we have coyotes and even mountain lions in our neck of the edge-of-town woods, but if I’m to get any sleep whatsoever myself, I have to give in and let him go outdoors. Otherwise, starting uncannily close to 2 a.m. every night, he will pace and pant and escalate into whining and even barking, insisting to go outside. If I let him out and make him come right back inside after relieving his bladder, I will get maybe an hour’s peace before he starts with the pacing and panting all over again. This is torture for me; I start feeling crazy with lack of sleep myself! So I give in, and he gets to stay outside – usually until around five a.m., when he’ll bark to be let back in.

I do have an outdoor pen that I could lock Otto in. He’d be outdoors, but protected from any potential predators. But no; that’s not his jam. I’ve tried it, and he just barks in protest. He knows how to accept being locked in the pen and wouldn’t dream of barking rudely during the day, but at night, he’s a different and fairly unreasonable old dog. He wants to be out patrolling the property (or surveilling from the sandbox). He’s going to make us all miserable if he doesn’t get what he wants at night. So he gets it, as scary as this is for me.

Boone and Woody sleep right through all of this letting Otto in and out. Thank goodness! If we had one more insomniac in the house, I don’t know what I’d do.

During much of the day, Boone shadows Woody, his idol. He sleeps with Woody (often, on Woody), and takes his cues about what to do when they see people passing our house from Woody (run to the fence, barking, and then run back to me, wherever I am, for treats!). He brings toys to Woody, inviting play, and when Woody isn’t interested in playing tug or chase games, he’ll kill time by laying on or near the big dog and chewing very gently on Woody’s ears! It’s the weirdest thing! Woody lets him do it; these days, his ears are almost always a little crunchy with dried Boone saliva.

Boone does spend a little time on his own, exploring our property. He likes to play with a toy I’ve hung from the bottom of my grandson’s tree swing; he’ll grab the toy and run with it as far as the rope will go, and then turn and tug furiously, lifting his front feet off the ground, then dropping it and watching it swing away from him, chasing it, and starting all over again.

He also plays this game with the tree on our front lawn. My husband doesn’t like the willow-like hanging branches, so we allow him to go ahead and do a little trimming.

Here’s a video of Boone playing with the trees.

I make Boone spend a little time in the outdoor pen during the day. It’s where he gets to enjoy chewing on pizzles, licking toys stuffed with canned food and frozen or Lickimats slathered with peanut butter. He’s doing great with these short (maybe an hour-long), daily confinement/alone-time practice sessions.

It’s definitely harder to give each one of my three dogs individual attention, and I think maybe it’s Woody who is getting the short end of the stick. Because Boone adores him so much, he is forced to babysit, and while he clearly enjoys having someone to play with sometimes, at other times, he looks sort of glum. I imagine he’s saying, “When is this twerp leaving?” When that happens, I call my friend Leonora, to see if Woody can visit her and her little dog Samson, and enjoy some spoiling time free from puppy spit.

It seems to be working out. 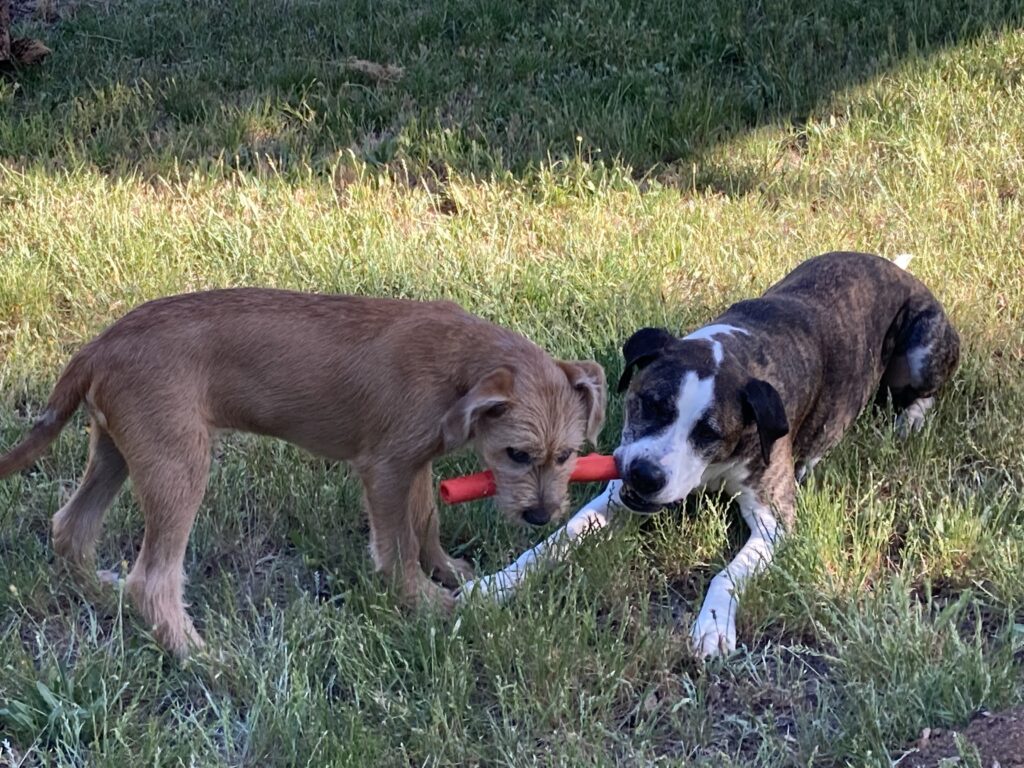