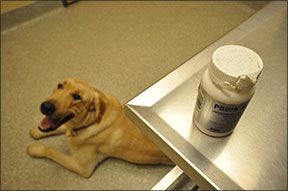 Some blog posts just write themselves — like this one. It’s almost 3 am, and I just got home from the emergency veterinary clinic.  At approximately 11:15 pm, Riley, an 18-month-old Labrador I am fostering for my local shelter, walked into my home office happily chewing something. I couldn’t see what it was, so I got up from my chair and put my fingers in his mouth. I extracted a white plastic lid, the kind that caps a large childproof medicine bottle. My mind spun, and I remembered that there had been a bottle of another dog’s medicine on my kitchen counter earlier in the evening. I trotted into the kitchen, and sure enough, the bottle was gone.

It was a pleasantly cool evening, so I had left the back door (which is off the kitchen) open, and Riley and my dogs had been going in and out as they pleased for an hour or so. I walked outside with Riley and quickly spotted the bottle, lying on one of the dog beds scattered on the deck. I picked it up, hoping it was still full of medicine, but there were just three pills inside it.

A few weeks ago, a friend’s dog passed away, and she gave me all of her dog’s things, to donate to my local shelter. She included her dog’s prescriptions, and I took them, intending to ask the veterinarian at the shelter whether she could use them for any of the shelter dogs. The drugs had been sitting on my kitchen counter – not a safe place when you have an untrained, adolescent Labrador in the house. This was totally my fault; I shouldn’t have had anything that is potentially harmful to a dog on the counter with a dog like Riley in the house. That goes for the bottle of Advil, pack of AA batteries, and even the pack of sugarless gum. I’m putting those in various drawers now. 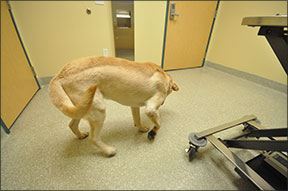 I trotted back into my office, and entered the name of the drug and “canine overdose” into a search engine. One of the first articles to appear was in a reputable veterinary magazine, and written by a vet who works for the ASPCA Animal Poison Control Center, the only 24/7 animal poison control center in the U.S. The article listed symptoms of an overdose as well as treatment. One of the symptoms mentioned was piloerection – when the dog’s hair stands up, as if he’s scared or angry (even though he’s not). I turned and looked at Riley; all his hair was standing up. Yikes. Time to pick up the cell phone and car keys and a leash.

I called the only emergency veterinarian clinic around, which is located about 25 miles from my house. I told them what happened, and the timeline. After a minute’s discussion with the vet on call, the receptionist suggested giving Riley some hydrogen peroxide, to try to get him to vomit up some of the pills, and then to come to the clinic as quickly as possible.

The clinic admitted Riley and took him into the back to check his blood pressure, which is one of the main symptoms of a overdose of this drug – and what can kill a dog if untreated and the dose was high enough. Then the vet tech instructed me to call the ASPCA Animal Poison Control Center, which charges a flat rate of $65 to consult (with a victim’s owner and/or vet) on poisoning cases. I gave the poison control center my credit card number and all the information I knew, including Riley’s weight, how long it had been since he ate the drugs, and the greatest possible dose he could possibly have consumed. (I was able to work that out based on the date of the prescription, the dose the dog had been receiving, and the date of her death.) The poison control staff transferred the call to their on-call veterinary toxicologist, who conferred with the emergency clinic’s vet about the best course of treatment for Riley. He was treated several times during the night/early morning with Acepromazine, to reduce his blood pressure every time it started increasing to a dangerous level, and some fluid, to help move the drugs through his system. I picked up the very dopey dog at about noon the next day.

I’m totally kicking myself. The whole thing was my fault. I’ve given this advice to other people dozens of times, but since I hadn’t actually seen Riley jump up on my counters, I hadn’t made them Labrador-safe. And I should have known better, especially since I HAD seen him jumping up onto the equally high potting table on my back porch where I feed my cats, to eat their food.

Take home point: If you are caring for a dog who is new to you, or if you have a dog who is prone to (or liable to, in the case of a young untrained dog) jumping on counters or seeking out odd things to chew, put anything that might cause harm if consumed WELL out of the dog’s reach. I should have put these drugs (as well as that bottle of Advil, that pack of AA batteries, and a half-pack of sugarless gum) in a cupboard or a drawer – or, I should have barred Riley from the kitchen altogether. Just because my big dog wouldn’t dream of jumping on a counter to explore, and my little dog wouldn’t be able to (though plenty willing), doesn’t mean the counter was a safe spot. And don’t count on the childproof top of a pill bottle to save you (or your dog): the bottle and the lid were barely chomped on, and yet Riley was able to eat almost all of the contents. Thank goodness, the bottle wasn’t full, just half full – not a lethal dose, though a highly dangerous one.

Photo caption: Waiting for the vet to come into the exam room at the emergency clinic. Check the hairdo! Piloerection is a classic sign of an overdose of the drug Riley ate.