I’m just back from a six-day trip that included two days of driving and a four-day educational seminar with world-renowned animal behavior experts: prominent British trainer Kay Laurence and psychology professor emeritus Susan Friedman, who has pioneered the application of Applied Behavior Analysis (ABA) to captive and companion animals. My traveling companions included my 4-year-old dog Woody; my friend and favorite dog trainer/model for WDJ, Sarah Richardson; and Sarah’s miniature Australian Shepherd, Minnie. Despite the fact that we got home at a relatively decent hour yesterday, I found that I was exhausted today! Both from the learning and the driving – over 10 hours in the car each way.

But it was a great trip. I thought my highly active dog Woody and 18-month-old Minnie would both be bananas after a full day’s drive, especially at the hotel when we arrived in the middle of the night. Neither dog had been on such a long drive, in an elevator, or in a hotel, where strangers can come around the corner at any moment and, in fact, walk past the door of your room all night and all day long. Wow! But once they discovered the fun of sleeping on the beds with their respective owners (Woody doesn’t get to do this at home, though I don’t know about Minnie), and Sarah and I figured out how to manage the room’s climate control so as to keep the fan running all night (to provide some white noise as cover for footsteps going down the hall), the dogs settled right down and continued to impress us with their good manners in public.

In the 22 years I have been editing WDJ, I have attended dozens of seminars on training and behavior, including annual conferences of the Association of Professional Dog Trainers (APDT), International Association of Animal Behavior Consultants (IAABC), and Pet Professionals Guild (PPG). But I’ve brought a dog only once (a tiny long-haired Chihuahua, Mokie, who had no other place to go at the time) – and this was in the late 1990s or perhaps early 2000s, I can’t remember. At any rate, he was along for the ride only because he could fit in a carry-on crate and I had no one to dog-sit – I wasn’t bringing him along in order to participate in a hands-on workshop. I have, in fact, never participated in a hands-on workshop with a visiting dog training expert. I have taken many classes with my dogs, where I was just one of the participants, not necessarily better or worse than any of the other students. But I had never dreamed of bringing a dog to a seminar of professional dog trainers and participating with my own dog.

Woody and I volunteered, and learned a thing or two

So it took me three days before I felt brave enough to raise my hand and volunteer to be one of the dog-and-handler teams who would stand before the group of 75 or so trainers and ask for guidance from the famed Kay Laurence with some aspect of dog behavior. I asked for help with Woody’s “back” behavior, which can get sticky sometimes. I mostly ask for him to back up when we are playing fetch, both so he can better see where the ball is going and also as a way to make sure he’s listening and being polite about the game, not just demanding THROW! THROW! THROW! If he gets so excited that he can’t be polite, the game ends. But Kay, who has been in the finals of the musical freestyle competition of the famed annual Crufts dog show (in Britain) a number of times, had some other tips on how to keep Woody’s “back up” behavior sharp, calm, and happy. This wasn’t the most significant thing I learned during the four-day seminar, but it took the most bravery, so it’s likely the moment I will remember the most!

Meeting other trainers was a pleasure

It was also a pleasure to meet dozens of other trainers from around the country who were present to learn more about learning theory from Susan Friedman and specific training methods from Kay. The type of training that is taught today is the norm for many of these young trainers; they’ve never known anything different. Having grown up in the days where dog-training professionals all used choke chains and physical “corrections” were not only the norm, but also a mark of whether the trainer was serious or just an amateur, I am envious of these passionate and competent young trainers, who get to start their professional education at least 20 years into the so-called “positive training” revolution. Sarah and I also attended a couple of social gatherings in the evenings, and had a blast talking about dogs and dog training with a table full of knowledgeable, committed trainers over great food and wine.

Our dogs enjoyed wrestling with each other and jumping from bed to bed in the hotel, sleeping on those beds with us, and their evening off-leash wild romps across a local sports field with other dogs who attended the event with their trainer/owners.

Now we’re all home, and it’s time to dig into work on the January 2020 issue of WDJ – the 23rd year of its publication. Wow! I wonder what training and living with dogs will look like in another 23 years, as applied behavior analysis and force-free training continues to develop in the hands of educated professionals like those I met. 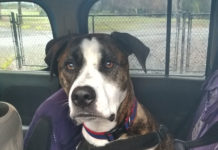