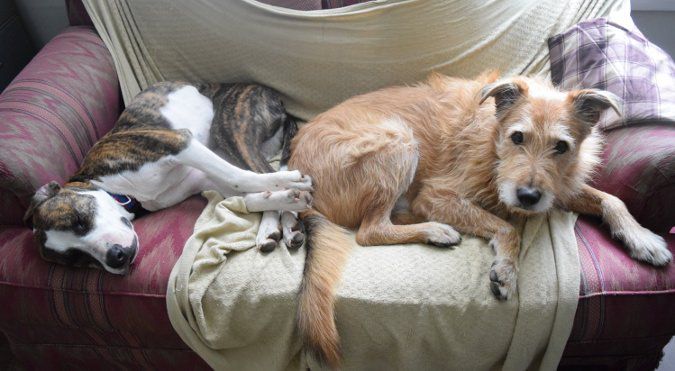 I recently saw a video on Facebook that was titled, “How Moms Think of Themselves Versus How Their Kids Think of Them.” It was a tad treacly, but bear with me for a moment.

In the video, mothers were being interviewed one at a time, and asked, “How would you describe yourself as a mom?”

All of them gave themselves fairly harsh assessments.

“I struggle with my temper.”

“I wish I had more patience.”

And even, “There are days I have my doubts about my abilities as a mother.”

Then their children were interviewed and asked about their moms.

“I have a lot of favorite things about my mom…”

“My mom is totally awesome…”

I guess I’m far enough past parenting a small child and so overrun with dogs, that I immediately imagined a similar scenario with dogs in it. If only we could interview our dogs!

I know what mine would say!

“She takes us for great walks! She gets us so many toys! We always have good food, and great treats! We get to sleep in the house, and on the couch!”

But I also know that I would probably describe myself in a similar fashion to those moms.

“I would love to do something like agility with them, but I just can’t seem to make the time to train.”

“Sometimes, when I see some new thing Woody has chewed up, I snap and yell, even if it’s really my own fault that he had the opportunity to snatch it.”

“I feel that I let Otto down by taking on foster dogs.”

I know that the makers of the “mom” video had a pre-planned agenda: They were allowed to watch their children’s assessments of them, and made to realize that no matter what they think of their own shortcomings as parents, their children really do appreciate everything they do for them.

I don’t know that our dogs can feel exactly the same type of conscious appreciation of us that our children can … but it made me wonder.

How would you describe yourself as a dog owner?

And how would your dog describe you as his or her owner?