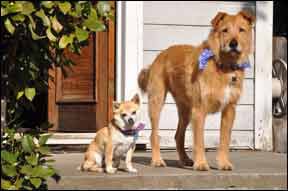 After a lifetime of washing my dogs myself, always, I’ve become addicted to taking my dogs to a groomer for even simple baths.  Oh, I might still wash Otto on the back lawn in the middle of our 100-degree summers, but at any other time, I’ve decided it’s oh-so-worth it to have the groomer handle the whole mess.  Even little 10-pound Tito, with his short coat – off to the groomer with you.

It started last fall sometime. Someone had been forced to surrender a litter of backyard-bred (in the worst way) Labradoodles to my local shelter, and the chocolate brown puppies were thin, wormy, flea-infested, and, at the tender age of about 10 weeks, shaggy and matted to the skin in spots. (Some of them also had foxtails in their ears.) They looked like a bunch of dirty mops, and they were lingering in the adoption kennels day after day. I asked the shelter director if we could possibly afford to take them to a groomer to be bathed and clipped and made to look like dogs. “Well,” she considered, “There is a groomer in town who sometimes will take one of our tough cases and groom them for free . . . .” Long story short, the groomer agreed to volunteer her shop’s services without charge, and I transported two of the matted pups across town in the morning, and picked up one of the gorgeous, fluffy pups in the afternoon to bring back to the shelter; one of the groomer’s employees adopted the other pup! The groomed puppy got adopted the next day, and we transported two more pups to the groomer the day after that. They were adopted quickly as well.

Out of gratitude, I decided to bring Otto and Tito to the groomer’s shop for baths, just to let her know that she gained at least one new client for life, and to let her know that I’d be telling everyone I know about how great the folks are at Bark Avenue Grooming at 2045 Park Avenue in Oroville, California. And when I picked up my dogs, who weren’t even that dirty, and saw how great they looked and smelled, I thought, that is the best money I’ve spent all week. Their nails were clipped, Otto’s beard was shaped a little bit, and their coats were so fluffy and clean, I kept finding myself running my hands through their hair.

Though I’m very capable of clipping my dogs’ nails, and I generally do a good job, I hate doing it.  Otto is actually quite relaxed about the whole thing (which is amazing, because he’s got so many other odd neuroses). But I’m the one who agonizes over every snip; the “quick” in a thick, black nail (the only kind Otto has!) is impossible to see. I’ve only nipped the quick once, making Otto startle and the toenail to bleed, and that was enough for me. My groomer throws the nail-trimming into the mix – and squeezes the dogs’ anal glands, too. Enough said.

And when, in frigid December, Otto found and rolled (and rolled and rolled) in a weeks-old dead salmon on the banks of the Feather River, where we walk pretty much daily, I did not freak out. We walked home, and I left him outside while I went indoors and called the groomer. “Charge me any amount, but can you take him now?” Then, I loaded him into the back of the truck; if we hadn’t had a truck, I would have walked him to the groomer. No way was he getting in my car with greasy dead salmon all over him. That bath was worth a fortune to me, and it cost me $40.

I’ve heard horror stories about dogs being treated badly by groomers, and I’m sure there are bad apples in the barrel. But I love my groomers – my back loves the groomers — and thanks in part to the bags full of yummy treats that I bring along and the groomers feed to Otto and Tito throughout the process, the dogs love the groomers, too. I can’t imagine living without them anymore.