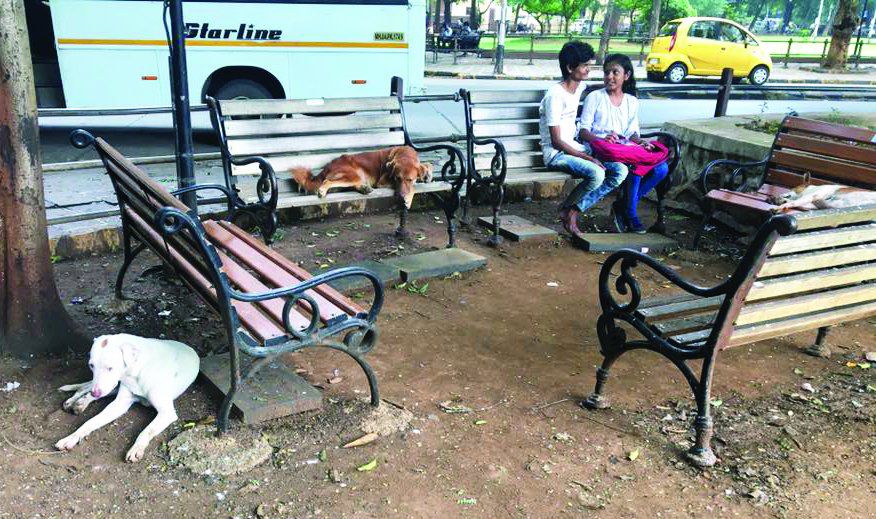 In the August issue of Whole Dog Journal, we published a column by Linda Case, a dog trainer and author of many books on canine and feline nutrition. Linda also publishes a blog, which goes by the same name as the column in WDJ, The Science Dog. Case’s August column was about studies that were conducted by various researchers to determine whether dogs have a strong preference for meat in their diet, or whether they were simply attracted to the smell of meat, or to higher-protein foods that contained less meat.

One of my duties as the editor of WDJ is to find appropriate photographs (or, less often, illustrations) to accompany our articles. I was temporarily stumped by the prospect of how to illustrate Case’s article in any interesting fashion. Pictures of dogs considering various things to eat? Ho-hum!

But then I remembered that several of the studies that Case’s column referenced were conducted on street dogs in India, and all of a sudden, a light bulb went off in my head. Just a few months ago, I had received a friend request from a young person, Aditi Joshi, who lives in Mumbai, India, and who is very involved with street dogs in India. I had become accustomed to seeing photos taken by Aditi of various free-roaming dogs appear in my Facebook news feed, but I hadn’t yet really investigated who the person was or why photos of dogs on the street were so frequently posted on her page.

I went to Aditi’s Facebook page and started scanning for pictures of dogs in the street in India, preferably eating, and quickly found some that would be perfect to illustrate Case’s article. I sent Aditi a message and asked whether I could pay to use some of her photos with the article.

We quickly struck up a lively correspondence and friendship. Aditi agreed to let me use some photos, and after speaking with her – well, communicating through direct online messaging from our disparate time zones, a half a world apart – about her life and work with street dogs in India, I wrote a sidebar for Linda’s article about how Aditi works to improve relations between street dogs and humans in her neighborhood in Mumbai. Also, I became an instant fan of her work, and with the help of one of Aditi’s San Francisco Bay area friends, set up a GoFundMe campaign in hopes of raising money to help Aditi further her goals.

One of the most astounding things that Aditi told me is that all healthy street dogs have a “right to life” in India. It is estimated that Mumbai is home to about a quarter million street dogs. As long as they are apparently healthy and have been sterilized and vaccinated against rabies (indicated by a notch made in one of their ears), they cannot be detained (except to provide care) or culled. Government agencies and non-governmental welfare organizations that capture dogs in order to vaccinate and sterilize free-roaming dogs are required to release the dogs in the same location they were captured from.

There are organizations that capture and treat severely injured and ill street dogs, and adoption programs aimed at finding homes for some of the street dogs. But the vast majority of dogs in the city continue to live as street dogs.

Aditi focuses her welfare efforts on these dogs, affectionately known as “streeties.” She facilitates community involvement to build a culture of stewardship that views free roaming street dogs as companion animals that the community holds a shared responsibility toward.

Her neighborhood (an area that is about the size of a small college campus) is home to approximately 76 streeties. Over the years Aditi has built a loose network of people in her neighborhood from residents to shop owners, street vendors, domestic workers, garbage collectors, delivery personnel, dog walkers, and doctors who assist in caring for these resident dogs in varying capacities. Through this network she coordinates vaccinations, sterilization, provision of shelter and food, preventative healthcare and vetting, grooming and emergency care in the case of injury or illness on site and in her home.

When properly taken care of, these healthy, settled dogs are the best buffer for minimizing human-animal conflicts and maintaining public health. This is also integral to keeping pet dogs in the community healthy, disease-free, and safe.

Aditi herself owns three former street dogs (complete with the notched ears that indicate they were trapped, neutered, and vaccinated), and oversees cares for 76 streeties in her neighborhood. (Much of the feeding, she notes, is provided by older ladies in the neighborhood – amazing, since a lot of feeders face significant hostility and even violence from people who do not like dogs.) Aditi’s family helps support her to foster additional dogs when one requires medical care.

But Aditi’s central goal is the greater coexistence so these animals don’t just survive but thrive. Her biggest challenge in doing so is building positive human-animal relationships in a context where many people still fear and misunderstand street animals. “There are people who want to show care but don’t actually know how, and some who are afraid and on the fence,” says Aditi. Her current goal is to create a sustainable and scalable program to teach people about safely handling dogs, and to teach street dogs skills that would smooth their integration into human environments.

To help achieve that goal, Aditi is currently enrolled in the prestigious Academy for Dog Trainers (founded and led by renowned California-based trainer/author Jean Donaldson) and is working on the development of curriculum for her street-dog education program. If you’d like to see a video about how Aditi trains street dogs, or to help support Aditi’s work for street dogs in Mumbai, see gofundme.com/aditis-streeties.

As for me, I’m enjoying getting to know the dogs in Aditi’s neighborhood through her photos and stories about them, and daydreaming about a trip to India to see these intelligent, street-savvy dogs in an environment that is completely foreign, but fascinating to me.