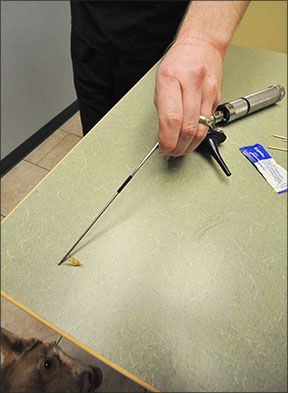 Just a reminder to immediately investigate any time you notice your dog licking any body part more than usual – and of course, any unexplained wound, bleeding, or lump.

The other day, I took a walk with my two dogs, and a friend and her two dogs (one of whom is Chaco, a Kelpie, one of my former fosters from my local shelter). We hiked on a trail next to the Feather River, which flows through my town. It’s hot here already, and the dogs jumped in the river and drank and swam frequently as we walked. About a mile from the trailhead, I, too, took the opportunity to clamber down an embankment and take a quick swim (the water is like ice). And from the low vantage of the water’s edge, I was able to see something that neither my friend nor I had seen as we had walked along: Chaco was bleeding a bit, in a most private area. Just a bit, and from above, the blood was hidden by her tail; I was able to see it only because she climbed out of the water and up the bank ahead of me; I was below and right behind her! If she had been an intact female, I would have figured she was in heat. But she’s spayed.

We cajoled Chaco into lying down, and Chris rubbed Chaco’s tummy while I looked for a wound. I couldn’t find a wound but blood was all over her vulva. We immediately turned back for the car, calling a veterinarian as we walked as fast as we could. We were lucky: Chris had gotten off of work early, so it was only about 5 pm, and the vet was open until 6.

Long story short, Chaco had a foxtail in her vagina. Yikes! It was corroded enough that the vet thought it was likely that it had been in the dog for a few days. Chris had last walked her dogs on a trail three days before, so it was likely on that trip (not ours that day) when Chaco picked up one of the nefarious awns. Chris had noticed Chaco licking herself, but not much more than usual. And she hadn’t had any other symptoms – yet.

Foxtails (and many other grasses) have seed heads with barbed tails; the barbs are aligned so that the seed head will attach to anything it touches and “travel” in one direction. Each little piece of the awn – every little thread of tail – can travel in a wound and cause infection everywhere it goes.

Foxtails are most notorious for getting between dogs’ toes, up their noses, and in their ears. But they can embed themselves in any place. The veterinarian we saw said that Chaco’s was the second he had removed this season (so far) from a female dog’s private anatomy, and that he had removed one  (so far this season) from a dog’s penis. Dogs with matted or thick coats can get them in any fold of skin or particularly thick bit of hair.

A dog’s skin is its only protection against foxtails, but it is all-too-easily breached. Once the foxtail gets past the skin (whether into an orifice or by stabbing into a thin-skinned spot, like between the toes), the awn can travel all over the body, causing infection, pain, and trauma. Generally, if you notice a dog worrying at himself early enough, a veterinarian can find the point of entry, follow the tract of infection, and remove the awn. But if the wound goes unnoticed and unexplored, the awn may travel far enough and cause enough trauma and infection to necessitate a major exploratory surgery to find and remove it.

At this time of year, when the grasses are turning brown and dry, and the seedheads are starting to blow about, be sure you check your dog carefully for stickers (and ticks!) after walking outside. Stay alert to any signs that your dog is grooming himself more than he usually does. And if he shows any sign of swelling, pain, head-shaking, bleeding, or limping, take him to see your veterinarian right away.