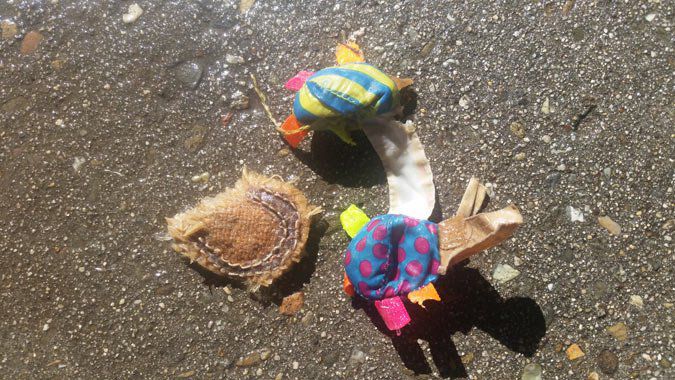 I’m afraid I have “one of those dogs” – the ones that swallow things. The ones that inspired the annual x-ray contest among veterinarians, x-rays of dogs with things that are stuck in their digestive tracts. No, Woody hasn’t had an x-ray yet, but unless I get a grip on this behavior, he’s going to be in the contest one of these days.

This little colorful trifle is a toy for tiny puppies. It was the first toy my sister bought for her young Jack Russell-mix when she first adopted her from a Jack Russell rescue group three years ago. Daisy loves the little toy, which has a fabric-covered squeaker in both ends, which are held together by a strip of what used to be colorful ribbon.

Woody first found the trifle at my sister’s house about three months ago, picking it out of a basket of bigger toys and tossing it in the air repeatedly. My sister and I were talking and he was enjoying himself. The next day, in the middle of the work day, with all three of my dogs lying quietly around my office, Woody started making the noise that signals an impending vomit. I leaped up, rushed him outside, and he promptly vomited up this toy, intact (though gooey).

Horrified, I called my sister and told her what just came out of Woody. She said, “Oh shoot, no wonder Daisy kept looking through all her toys last night! She knew it was missing!” I rinsed it off and tossed it in a pile of puppy laundry in the laundry room (I was fostering a litter of puppies at the time). It came out of the washer looking brand-new – and with the squeakers still squeaking! – so I gave it back to my sister.

A couple of weeks ago now, I brought Woody with me on a visit to the San Francisco Bay area, and he spent one night at my son’s house. He went counter-surfing there, and the next day, vomited up a candy wrapper and, uh oh, another squeaker. This time, one that he had chewed out of one of my son’s dog’s toys. It was sewn into a fabric pouch, and the whole thing was intact (and still capable of squeaking). My son and I shook our heads, and I resolved to make sure that Woody doesn’t have access to any more squeaky toys without supervision.

Last weekend, my husband and I went camping, and my sister volunteered to dog-sit Woody (my other dogs stayed home with my son-in-law in charge). She prepared for his arrival by putting all of her dogs’ most vulnerable toys, and the ones with squeakers, up in a cabinet where Woody couldn’t get them. Woody had a great time there, where Auntie Pam allows all sorts of things that aren’t allowed at home, like running full speed down the hall (she has carpet, I don’t) and leaping over the back of the couch, back and forth, with toys. (My husband would have a stroke.) And it seems the only thing he wrecked was the screen door he didn’t see closed and ran into at top speed, which promptly folded in two and bounced backward, along with Woody, out of the frame. (I’ve ordered her one of the curtain-type screen doors, which she had been saying she wanted to get anyway. Sorry!)

But a day after we returned, with me sitting at my laptop working at home, Woody started making that noise again. I rushed him outside, where he promptly vomited up Daisy’s trifle again! And a hunk of some other toy.

I called my sister. “Has Daisy been looking for something?” I asked.

“Um, maybe . . . she has been looking around a little, but I haven’t noticed anything missing!”

I told her that Woody just barfed up the trifle toy, and she was properly horrified. I hosed it off for the photo, but while we agreed that while it looks to be in renewable condition, we also agreed that it needs to be thrown away. Hopefully, Daisy will forget about it soon.

I’m grateful that for now, Woody’s digestive tract is doing the right thing in rejecting non-edible items that end up in there. But joking aside, I (and my sister) will be keeping a closer eye on what that dog has in his mouth (or is on the floor and under the beds), lest we have an entry into that contest.

Here’s a link to the 2015 edition; hoping not to be in the 2016! http://www.veterinarypracticenews.com/2015Xraycontestwinners/