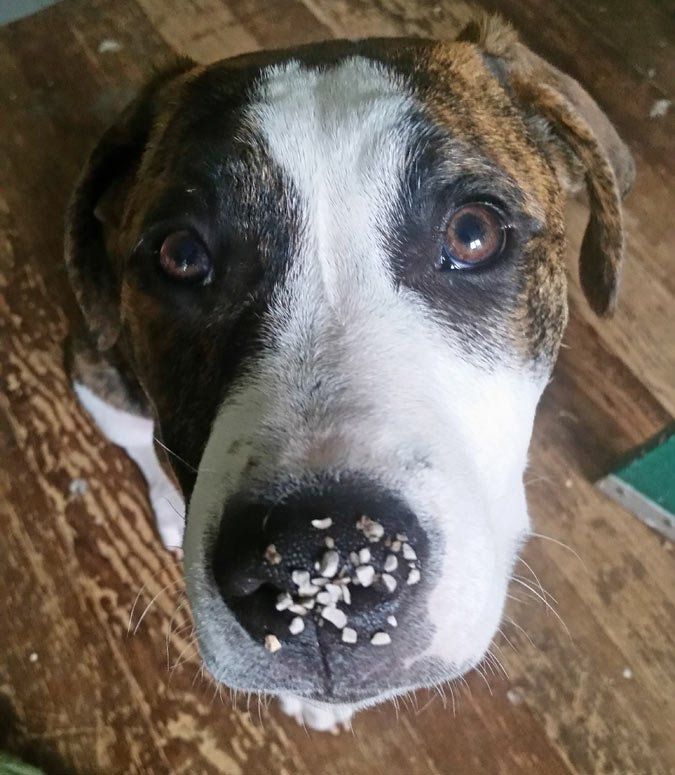 One evening more than a week ago, I’m sitting on the couch, sipping a glass of wine, engrossed in a Netflix movie, when my husband exclaims something from the kitchen – something that sounded like “cat” or was it “bat”?

He comes in grumbling about us having too many animals, and that there is a bat in the kitchen. Ducking reflexively, I may have shrieked, “Alive or dead?”

Ugh, that’s a job for me, then. If the bat had flown or been found in the house without a feline or canine companion, I probably could have made a case for it being his job to deal with. But if it has to do with “my” cats or dogs, I’m up.

I like bats, and appreciate their mosquito-eating skills. But I like them in the sky, where they belong, not in my kitchen. Fortunately for me, not so much for the bat, this one was dead – and perhaps dead for a while. The cat who brought it in didn’t look very interested in it, and I couldn’t see any wounds or blood on it. I used a Ziploc bag to pick it up, sealed the bag, and washed my hands. I then looked the cat over for wounds or bites. I didn’t see any.

I was at my local animal shelter a month or so ago, picking up or dropping off one litter of foster puppies or another, when I overheard a discussion regarding rabid bats. My ears pricked up when I heard the name of the street I live on. Elbowing my way into the conversation, I learned that in the past two months, there have been two bats found in homes – both within blocks of my house – which were tested and found to have rabies. So, first thing the next morning, I called my local animal control officer, and asked what I should do. I was advised to bring the vaccination records for the cat, and the bat, to my local shelter; the bat would be tested by our county’s public health department for rabies.

I started looking through my animals’ health records, to check on all of their vaccinations. Wouldn’t you know it? Somehow, all the dogs, and the other cat, were perfectly current on their rabies vaccines. The cat in question, though, hadn’t had a rabies vaccine for three years – and she’s only had one. How had I screwed that up? (Well, there’s an answer; she was sick the last time I brought her and her brother to the vet; he was well and got vaccinated, and I was supposed to bring her back but had forgotten to do so. Bad owner!)

I called the officer back with this news about the cat’s rabies vaccination status, and was told to add my cat to the list of things I needed to bring to the shelter. Because her rabies vaccine was not current, she would have to be quarantined until the results of the bat came back – negative, we hoped.

My shelter was doing me a favor in quarantining the cat. Ordinarily, a person would have to board the cat at a veterinary office that provides quarantine services. But given that I’ve been fostering puppies for the shelter at my office/house (two blocks away from where I live) nearly nonstop since November, the shelter director said they would quarantine (and vaccinate) the cat for me.

The good news: The bat’s rabies test came back negative.

The bad news: My cat picked up a mild upper respiratory virus at the shelter.  When I picked her up and drove toward home, she sneezed nearly nonstop. I decided I would keep her at my office/house until she felt better, so she wouldn’t bring the virus home to her brother and my neighbor’s cats. (She spends a lot of time in my neighbor’s yard, which drives me crazy because she is fat from eating from the trough of cat food they keep outdoors. I have begged them to discourage her from hanging out over there, but they like her.)

When my cats were younger, I kept them at my office/house a lot. They actually got to the point where they would jump into my car with my dogs for my two-block commute, hang out with us all day, and then load up again for the evening commute home. But since we started renting out bedrooms to students attending a local trade school, and one student was allergic to cats, I stopped bringing the cats to work. Currently, I don’t have any of the rooms rented, and though it had been a few years since she had been here, my cat settled right down on the sofa and went to sleep.

I had a litter box in the garage, from when my sister-in-law brought a neighbor and her cat to stay here during a forest fire evacuation last summer. I brought it out, filled it with fresh litter, and put it in the kitchen. I put food and water for the cat on the pass-through between the kitchen and the living/dining room, the best spot to keep the dogs from eating it.

We spent the day peacefully. The cat has smacked my puppy, Woody, a few times for being too curious or moving too quickly through a room in which the cat was sitting (she’s a harsh ruler), and though he was excited to see her after a few days apart, she raised her paw to him once and he settled right down again. They even napped on the loveseat in my office (it’s pretty much just for pets) in the afternoon.

That evening, I was working at my computer when I heard a noise I couldn’t place. Then I identified it as the sound of the cat in the litter box. But the cat was still asleep on the loveseat. I looked around, counting heads. Woody was missing. “WOODY!”

He came ambling in from the kitchen – with cat litter stuck all over his nose. ACK!! My cats are indoor/outdoor cats, and they don’t ordinarily use a litter box, and even when I did have an indoor-only cat, I’ve never had a dog who snacked from a litter box! But now I do!

Because I’ve had so many foster puppies, I’ve invested heavily in exercise pens and baby gates. I can keep the litter box gated away from Woody, but accessible to my sneezy cat, until she’s well enough to go home again. I’ll just have to step over it a dozen times a day.

While my cat and I were super lucky that the bat wasn’t rabid, and cat-poop-snacking isn’t the worst behavior a dog can learn, I still really, really wish I hadn’t failed to keep one of my pets’ rabies vaccines current.  It all could have been avoided: the quarantine, the feline upper respiratory virus, the horror of coprophagia. Don’t be like me!