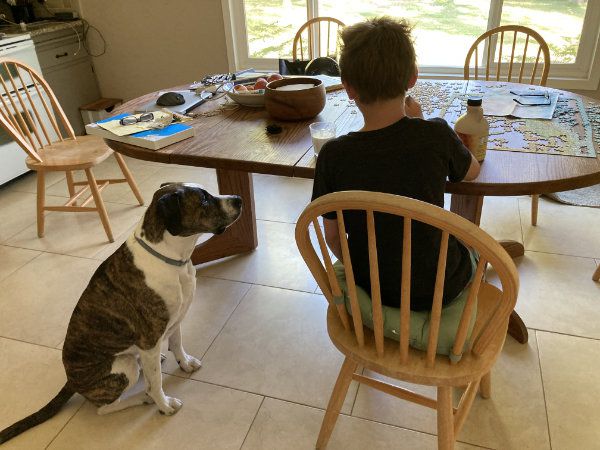 Neither one of my dogs has ever been a beggar – haunting the kitchen or dining table, whining or nudging us in hopes of receiving bits of food from the table.  And it’s not even because we don’t ever feed them a scrap of food from our plates, because we sometimes do. And sometimes we feed them our leftovers scraped into their food bowls.

But this was the summer that I started teaching our grandson to make his own breakfast, which resulted in not only a lot of leftover scraps of food, but also dropped food, including the occasional raw egg dropped onto the floor. Our grandson is cereal-averse, and scrambled eggs and pancakes are his preferred breakfast foods (which is why I wanted him to learn to prepare these foods by himself; his breakfasts are more labor-intensive than I’m used to providing in the morning!).

When you teach kids to cook, there is a certain amount of waste as they learn the skills – cracking and whipping eggs, measuring ingredients, pouring appropriate amounts of milk and syrup, and attending the foods in the toaster or pan so that nothing gets burned. It takes a while before their motor control and judgment is developed enough to prevent a puddle of wasted syrup, dropped eggs, blackened pancakes or toast, or spilled milk.

And that’s how my dog Woody became, in just a few days, the most attentive kitchen monitor ever. He identified the sounds of Liam in the kitchen as the most reliable predictor of food scraps EVER, and would come running from a dead sleep on the couch at the sound of the cabinet where we keep the pans. He shadowed Liam around the kitchen, watching alertly for every bit of spilled or dropped food matter – and volunteering to lick the food scraps off the plates before they were put into the dishwasher.

The kitchen-haunting behavior hasn’t drifted; Woody isn’t following me or my husband around the kitchen; we are not reliable predictors of dropped food (though we often do scrape any healthy leftovers from our plates into the dog’s bowls). I think it’s the random yet reliable reinforcement of food scraps that came from Liam’s trials in food preparation that led to the rapid development of at least two new behaviors from Woody: a perfect “heel” around the kitchen and a solid sit-stay (sit-stay-stare?) while Liam ate.

Trainers sometimes talk about the “single-trial learning” that occurs when our dogs experience a powerful (and perhaps unexpected) reinforcement for their behavior. Some of the strongest examples of this are negative, as when a dog gets his tail accidentally stepped on or slammed in a door and thereafter avoids the site where this happened or the person who was nearby. Going to the groomer or vet’s office and having something unpleasant happen to them might also result in the instant development of fearful (or even aggressive) behaviors in those settings following a single painful or aversive experience.

Sometimes this one-trial learning causes a new and highly unwanted household behavior, such as when the dog follows the aroma of a roast cooling on the counter and has the opportunity to help himself to it, or finds a wealth of discarded food scraps in the garbage and learns to check the counter or garbage can for unattended food from then on. That’s more or less what happened with Woody’s new behavior of lurking, buzzard-like, in the kitchen when Liam is cooking or eating – the first broken egg he was called on to clean up taught him to pay rapt attention to every move Liam makes in the kitchen.

I should note here that I’m not terribly worried about the development of this lurking/mildly begging behavior because Liam doesn’t stay with us all that often – and because it’s kind of handy to have Woody clean up most of Liam’s spills! I only wish he liked orange juice as much as he liked pancake syrup!

But it occurs to me that if you wanted to teach a dog a simple new behavior, particularly one that requires only that he BE in a particular spot or position – such as staying on a mat just outside the kitchen while you cook, as perhaps the most useful example, using a spectacularly valuable (to him) food reward for putting himself in and staying in that spot would be a great way to go about it.