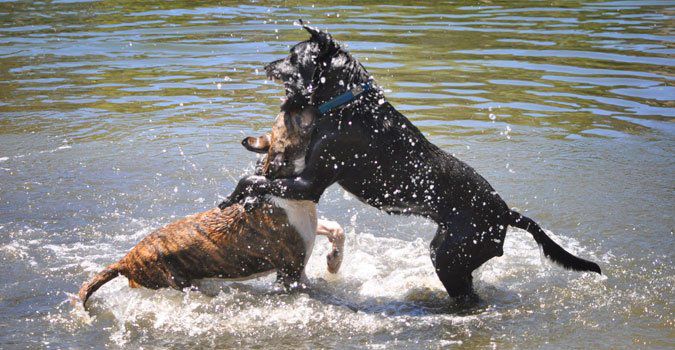 I’ve heard of it happening, but have never witnessed it before tonight: the horror of a dog getting his jaw twisted in another dog’s collar. May I never witness it again.

I was working at my computer when I heard a dog down the street, screaming. The only other times I’ve heard a dog scream like that were when one was hit by a car and another was kicked by a horse. I ran out my office door and down the street toward the noise. There is a black Lab-mix who is often playing in a fenced front yard two doors down, and I saw a young woman bent over what I thought was just that one dog. My first thought was that he had somehow broken a leg and she was restraining him. I ran through the gate and saw that she was, in fact, bent over TWO black Lab-mixes. I couldn’t tell at first what I was seeing, just this tangle of screaming dogs. I yelped, “What’s happening?” And the young woman shouted, “They’re stuck, I don’t know how!” It was SO confusing because both dogs were solid black and writhing around.

Then I saw the collar around the lower jaw of one dog. “”It’s the collar!” I yelled. “Do you have anything to cut it?!” My mind was racing but I couldn’t think of a single thing I had in my office that would cut it. The young woman yelled at someone else – her roommate, it turned out. “Get something to cut the collar!!”

I was also feeling all over the collars for a buckle. I felt a quick-release buckle and released it – but it was the release on the collar of the dog who had his jaw stuck.  Just then I smelled poop; the dog whose collar was twisted was collapsing, and had just evacuated his bowels. He was being choked to death right in our hands.

I finally located the other buckle. It was a plain metal buckle. It was also in the mouth of the dog whose jaw was twisted inside. There was NO WAY I could get it to release.

The woman who was holding the dogs with me was screaming for her roommate. I said, “Let’s try to roll them to untwist it.” We grabbed the dogs’ bodies and tried to figure out which way would release the twist, but we simply could not see the solution in the mass of twisting black fur. One dog was moaning, the other gasping.

The other woman ran out with a pair of sharp scissors and a knife. I doubted the scissors, but it looked safer than a knife. She tried to jam the scissors under the collar and it was incredibly tight. She quailed for a moment, yelping, “I’m afraid to cut him!” And I said, “Just do it! Stitches are better than dying!”  She jabbed the lower blade of the scissors under the collar and worked them with all her might, and by some miracle, the material started to separate.  “Yes! Good! You’re doing it! Keep going!” the two of us holding the dogs encouraged her. We were ALL gasping for air at this point.

Then it was done. The collar fell off and the dogs literally fell apart. The one who was being choked coughed and gasped. The one with his jaw twisted ran away from us across the yard, then ran back with his tail between his legs – scared but ok. We encouraged the other dog – Good boy! You’re ok! – and he got to his feet, wobbling, and wagged his tail weakly, but it was apparent that he was regaining strength moment by moment. I said to the young women, “Are you ok?” “Yes, yes, are you?” We were all ok.

For the next 20 minutes or so, we talked and watched the dogs. In those minutes, both dogs defecated. The choked dog peed, too, and a few minutes later, he vomited. He seemed just really shaken but ok. I ran back to my office and found one of Otto’s older quick release collars to give them. We all hugged each other and the dogs.

Thank God the dog hadn’t been wearing a choke chain; I don’t have bolt cutters hanging around and don’t know anyone else who does either. That dog would have been dead if he had been wearing one.

Please: If your dog has a buckle collar – or one that has to be pulled over the dog’s head to take it off — PLEASE remove it before he or she plays with other dogs. Better yet: Don’t ever put any collar on your dog that doesn’t have a quick-release buckle.