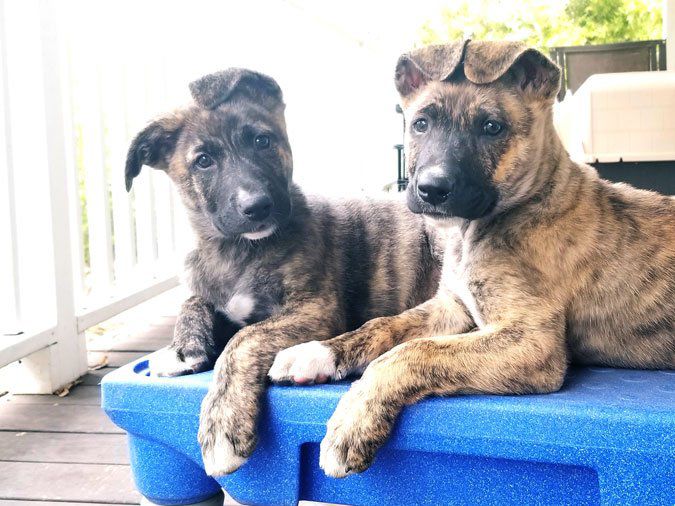 As I may have already said about a dozen times lately, I have been fostering some puppies for my local shelter. Usually, this is a matter of taking them in when they are quite young, getting them safely through whatever ails them – often a cocktail of internal parasites and tummy troubles – and socializing them with anyone I can drag over to my house to play, until they are old enough and healthy enough to undergo spay/neuter surgery. At that point, I take them to the shelter, weep as I kiss them all goodbye, and then watch the happy adoption announcements appear on the shelter website over the next day or so as they all find homes.

This bunch has been different, and I’m so sad and frustrated about it!

The shelter broke up this litter of 10 into two groups, and altered the four largest, healthiest puppies first; this happened two weeks ago. Those four puppies went up for adoption while I was out of town for six days, and every day while I was gone, I checked the shelter website to see who got adopted. Not ONE got adopted!

So when I got back, I picked up the puppies, bathed them (stinky from staying at the shelter), gave them a glorious morning of play with my dog Woody, and settled into a routine of bringing them to the shelter each morning when the kennels open for viewing at 10 a.m., and picking them up each day when the shelter closes, so they can spend their evenings running around the backyard and nights indoors. This way, they are nice and tired (and well-behaved) at the shelter, not whiny or barky or jumpy, and they don’t smell like they have been walking and sitting in urine. I also work with them for a few minutes several times each morning and evening, and they have “sit” on cue (and offer it every time you so much as look at them), and their recall is truly a delight…

Then I made and posted a short little video, showing how cute they are, and posted it on the shelter’s Facebook page. Within a day, two of them got adopted, and I was psyched. And then… crickets again. I have been bringing the other two altered puppies to and from the shelter daily, and they are champions at hopping into the car and riding nicely – but we seem no closer to getting them adopted than we were two weeks ago.

And, here is the worse news: The other six puppies, who have been in the capable hands of a good friend here in town for the past few weeks, are being altered today. So we will be providing pickup and drop-off service for eight pups until these guys get adopted.

I think there are a few reasons for the slow adoption rate of this litter. First, the shelter has had a little glut of puppies lately. The last two of another litter of 10 pit-mix pups are also awaiting adoption. A litter of nine Boxer-mix puppies are already being shown on the adoption row, and getting altered next week. And there are several other individual pups awaiting adoption. My community seems to have absorbed all the puppies they can for a while; we have to reach out to a wider circle. (And to that end, I will be taking more portraits and videos of the pups and adding longer descriptions of them to the Petfinder.com page for the shelter.)

Also, this litter is of pitbull and, reportedly, German Shepherd heritage. The shelter staff saw the mom; she was a pit-mix, so they absolutely need to represent the pups as such, even if they don’t look very “pittie.” Most of the pups look more like German Shepherds … but they all have some variation of a brindle coat. I don’t know about you, but in my experience, dogs with brindle coats get adopted at a slower rate than the dog most people say has the hardest time getting adopted: black dogs. I just don’t see the black dog bias in my area – but we also get a lot of black Labrador-mixes around here, and people snap them up. One friend wondered if the pups’ brindle coats make them look dirty, and thus, off-putting. I don’t know!

I do know that people who like pitbulls or want one, generally want a pitbull that looks like a pitbull – and these pups look more like Shepherds. And yet, I wonder if people who might want a German Shepherd-type dog are being put off by the fact that the mom was a pitbull-type. It’s all guessing; I just don’t know! They are so sweet and so smart! What’s the problem??

Anyway, sorry for whining so much; I hope I won’t still be talking about these pups for more than another few weeks. My dog food budget can’t take too much more of this!

But on the other hand, I get puppy breath infusions daily. So there is that, and it does help compensate.