Home Behavior Five Things to do When Your Dog Grabs the Leash and Doesnt...
Print
Email
Facebook
Twitter 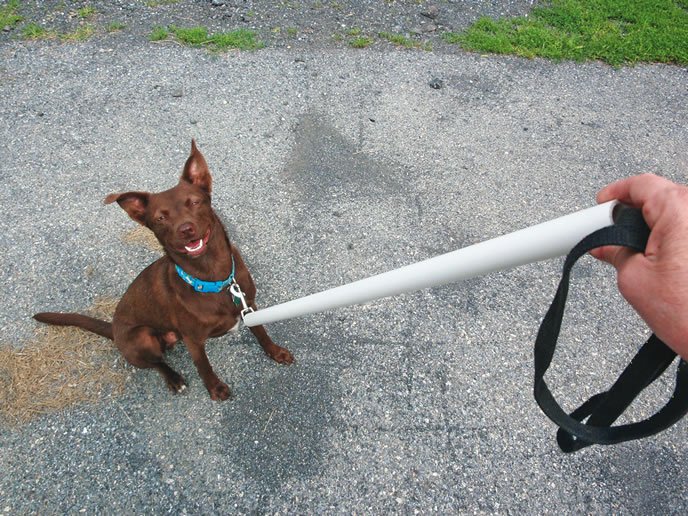 The game of leash-tug is encouraged by some agility competitors, as a reinforcer for their dogs at the end of an agility run. However, many dog owners (myself included), find it an annoying and sometimes even dangerous behavior. Here are five things you can do if you’re in the latter group and would like to get your dog to stop playing leash tug:

1. The Exercise Solution. Leash-tugging is often the function of too much energy. Exercise your dog (hard) before his walk and you’ll have a far less grabby walking companion. If you don’t have a backyard for ball- or disc-chasing (perhaps why you’re leash-walking him in the first place!), play ball in a long hallway, play “Find it” for hidden treats throughout the house, stand at the top of the stairs (anti-slip runners on the stairs, please), toss a treat to the bottom, call him back to you, toss another treat …

2. The Incompatible-Behavior Solution. If it’s your dog’s morning wake-up bathroom break and you can’t exercise him in the house first because he has to poop and pee, grab your highest-value treats on your way out the door and start reinforcing for polite leash walking. He can’t look at you in happy anticipation of the next bit of chicken and grab his leash at the same time. And/or carry a favorite non-leash tug toy in your pocket, and invite your dog to tug on it instead. Tugging on a toy is incompatible with tugging on a leash; he can’t do both at the same time.

3. The Two-Leash Solution. Part of the problem with leash tugging is that you have to keep hold of the leash so your dog doesn’t run off. You’re an unwilling partner in the tug, and meanwhile your dog is happily reinforcing himself at his end of the game. If your dog finds leash-tug more reinforcing than high-value treats, or happily swaps back and forth between leash and tug toy, the incompatible-behavior approach doesn’t work. Try attaching two leashes to his collar. When he grabs one, hold the other and drop the one he’s got. If he grabs the one you’re now holding, switch back to the other. If he grabs both, you’re back to square one.

4. The Choke-Chain Solution. My students’ eyes get very big when I say, “This is the one case in which I will use a choke chain with a dog.” I then reassure them by saying, “But not on the dog!”

Take a carabiner or a double-ended metal clip and use it to attach one end of the choke chain to the ring on the dog’s collar. Attach the other end of the chain to the clip on the leash. Now when your dog goes to grab the leash, he gets metal instead of soft cotton, leather, or nylon. For most dogs, a metal chain isn’t nearly as much fun to grab and tug, and the behavior extinguishes (stops).

If he persists in grabbing above the chain, you can invest in one of those wretched grocery-store chain leashes and use it until the leash grabbing behavior is extinguished. Remember, though: If you need to shorten up your dog’s leash as you pass another person, dog, car, or whatever, those chain leashes are really hard on your hands (which is why they are wretched), so be prepared (wear gloves!).

5. The PVC-Pipe Solution. Perhaps your dog is happy to tug on a metal chain, or the pain of the chain on your own hands is more than you’re willing to bear. Take a length (perhaps 3-4 feet)of PVC pipe (depending on the size of the clip on your leash, about 1-2 inches in diameter) and drop the clip though the pipe before attaching it to your dog’s collar (see photo above). Now, when he bites his leash he gets hard plastic, and won’t be able to get a grip on it to tug.

This has the added advantage of acting as a makeshift “control pole” (as used by animal control officers); if your dog grabs at your hands and clothing as well as his leash, you can use the pole to hold him away from you.

So there you go! Most of these are likely to be temporary solutions until you can positively convince your dog to keep his teeth off his leash, but feel free to use them as long as needed.

Here’s a bonus “thing” if you want a training challenge: Put the leash tugging behavior under excellent stimulus control, so your dog does it only when you give him the cue (the way the agility folks do). Then give the cue only when you’re prepared and it’s convenient to play a minute or two of leash-tug with him. In order to achieve this level of stimulus control you have to be ready and able to never reinforce it if you haven’t given him the cue. Ask your obedience friends if their dogs ever grab the leash when they aren’t invited to do so. (Personally, I’m sticking with the first five “things.”)

Pat Miller, CBCC-KA, CPDT-KA, is WDJ’s Training Editor. She lives in Fairplay, Maryland, where she offers dog-training classes and courses for trainers at her facility, Peaceable Paws. 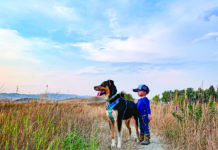 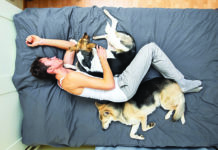 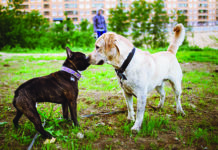 How to Safely Introduce Your Dog to Other Dogs

Nancy Kerns
9
Like most dog owners, I absolutely love taking pictures of my dogs and my dogs’ friends (my friends’ dogs, lol). Most of...

Saw some good sized racoon prints in the mud at the pale shore— way bigger than Samson”s feet, but not that much smaller than 70-pound Woody’s feet. ...