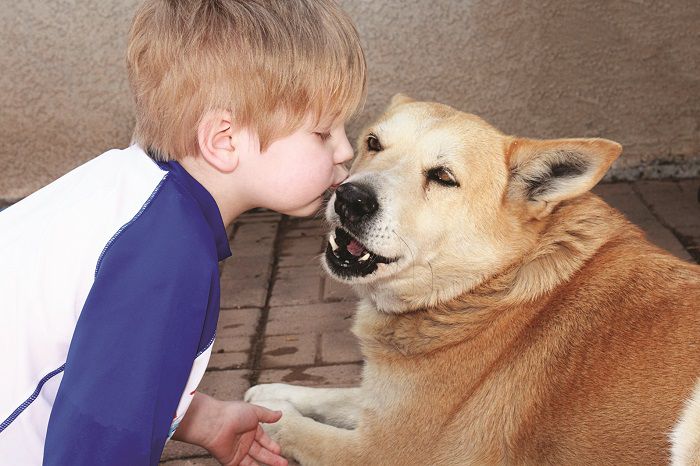 These days, it seems that every time someone posts a picture on social media of a child with a dog it is immediately followed by a spate of posts expressing horror at the anticipated savage attack likely to follow.

Granted, some of those photos do, indeed, show dogs displaying body language signals that suggest a significant amount of discomfort at the proximity of the child, and real potential for injury. But many of them also, in my opinion, depict normal, healthy interactions between dogs and young humans.

Dogs and kids have been happy buddies for centuries. While dog bites to children are nothing new (I was bitten by a stray puppy at age five, in 1956) we seem to be much more reactive to them as a culture than we used to be. When did we become a society so phobic about any dog/kid interaction? And, perhaps more important, how do we help people recognize and create safe, healthy relationships between dogs and children?

There is a truly horrendous video on YouTube of parents encouraging their very young child to abuse their Rottweiler. The child runs over to the dog, who is lying on the floor, climbs on his back, hugs him violently – and when the dog gets up to try to move away from the abuse, the adults call him back and make him lie down for more child torture. Meanwhile the child has lost interest and walked away and the parents insist that he come back and interact with the dog more.

This time the dog is lying on his side, and for the remainder of the two-minute clip the child climbs on and violently bounces up and down on the dog’s ribcage; grabs his jowls, cheek, and nose; and puts his face directly in the dog’s face, all the while with encouragement and laughter from the parents. Through it all, the dog is giving off constant signs of stress and distress – whale eye, panting, tongue flicks, gasping for air, and more. (If you really want to see it, we made a shortcut to a copy of the original video that someone captioned with notes about the dog’s warning signs: tinyurl.com/WDJ-abuse.)

This should be prosecutable child endangerment as well as animal abuse. Someday, if the incredibly tolerant Rottweiler has finally had enough and bites the child, the parents will be aghast. “We don’t know what happened – he was always so good with little Bobby!” And if the defensive bite is serious enough, the dog is likely to lose his life as a result . Meanwhile, if the child tries this incredibly inappropriate behavior with a less tolerant dog (which would include most dogs on the planet), he’s likely to be very badly bitten, and again, the unfortunate dog might easily pay with his life. What were these parents thinking?

A commonly quoted statistic states that some 4.7 million dog bites occur in the U.S. annually, with 42% of the victims age 14 or under.

As staggering as though those numbers may be, and as sensational as the “Dog Mauls Toddler” headlines are, they are also somewhat misleading. A very large percentage of those millions of bites are relatively minor, so the situation isn’t nearly as dire as it first appears.

Still, even one preventable child-mauling incident is one too many, and many of them are, in fact, quite preventable.

Supervision of interactions between dogs and children is, indeed, critically important, at least until it is crystal clear that the child and dog are safe together. The “You must supervise kids and dogs!” mantra has been repeated so many times I would be surprised if there’s even one parent in the Western world who hasn’t heard it.

But here’s the rub: A significant number of kids suffer from dog bites even when the parent or other caretaker is directly supervising the interaction. If “supervision” is the holy grail of dog-kid interactions, how does this happen?

It seems that, over the years, as we trainers and behaviorists have repeated “Supervise, supervise, supervise!” until we’re blue in the face, we have somehow neglected to do a thorough job of helping parents and caretakers understand exactly what they are looking for when they are supervising.

It’s not just about being present, it’s also about watching closely, preventing the child from interacting inappropriately with the dog, and watching the dog for body language signals that communicate some level of discomfort with the child’s presence and/or interactions.

Management – controlling your dog’s enviroment and access to unsafe or undesirable things or practices – is a vital part of any successful behavior and training program. With kids and dogs, it’s even more critical. When you aren’t able to actively supervise (no TV! no texting!), you must manage. The price for management failure is simply too high.

A DICTIONARY OF CANINE STRESS SIGNALS

Even if your dog adores children (and especially if she doesn’t!), management and supervision are vitally important elements of successful dog/baby/child-keeping. There are a staggering number of serious child-bite cases (and fatalities) where the adult left the room “just for a minute.”

That’s why dog training and behavior professionals are well-known for repeating the warning, “Never leave dogs and small children together unattended.” This means, not for a moment. Not while you take a quick bathroom break, or run to the kitchen to grab a snack. Even if the baby is sleeping! Take the dog with you if you leave the room where the baby is sleeping or the child is watching a video. Put the dog in her crate. Shut her in another room.

Of course, you want to do everything you can to help your dog love children. Even if you don’t have small humans of your own, your dog is likely to encounter them at some point in her life, and things will go better for all involved if she already thinks kids are wonderful.

Ideally, every dog should be well socialized with babies and children from puppyhood. Many young adults adopt a pup at a time when children are, if anything, a distant prospect, without thinking about the fact that kids could easily arrive within the 10 to 15 years of their dog’s lifespan. Even if there will never be children in the dog’s immediate family, chances are she will encounter small humans at some point in her life. By convincing her very early on that children are wonderful, you greatly reduce the risk that she will ever feel compelled to bite one.

If an adult-dog adoption is in the works and there will be (or are) children in your world, remember this critically important caveat: Dogs who are going to be around babies and/or children must adore kids, not just tolerate them. A dog who adores children will forgive many of the inappropriate things young humans will inevitably do to dogs, despite your best efforts at supervision and management. A dog who merely tolerates them will not.

Safe child-dog interactions start with teaching children – even very young children – how to respect and interact appropriately with dogs. If a child is too young to grasp the information, then the supervising adult must physically prevent the child from being inappropriate.

Babies and toddlers often flail their hands at new or exciting stimuli – like dogs. Not surprisingly, many dogs are likely to find this quite aversive! When young children are introduced to dogs, the adult needs to hold the child’s hand(s) and guide them in appropriately using their hands to touch the dog appropriately (gently and slowly) and without any flailing.

It’s equally important to teach children that dogs are not toys to be treated roughly. Even if your family dog tolerates – or even loves – being hugged, allowing your young child to hug your dog can prompt her to hug the next dog she meets – with possibly disastrous results. Until your child is old enough to understand that some things that are okay with your dog are not okay with other dogs, you are far safer not allowing her to do those things with your dog, either.

Ideally, engage your child to assist with your dog’s training at the earliest possible age using positive reinforcement-based methods that teach your child the importance of cooperation and respect, so your child learns how to interact appropriately with other sentient creatures. At the same time, you will be strengthening the positive association between your dog and your child.

Any time your dog shows any sign of being uncomfortable with your child’s presence, you must separate the dog and child to protect them both. Of course, in order to do this you must understand dog body language well enough to recognize when a dog is expressing discomfort.

People often say, “If my dog could only talk…” They actually do communicate! But their mode of communication is body language – and too few humans take the time to learn that language, or “listen” to what the dog is telling us.

In the sidebar below, we share  some different ways your dog may be telling you she’s uncomfortable. This is an extensive list, albeit not necessarily a complete one. Study it, and then watch your dog for any of these behaviors, both with children present and absent. Any time you observe stress signals from your dog in the presence of children (or elsewhere!) it’s wise to take immediate steps to reduce her stress.

If, while you’re managing, supervising, and training your dog around kids, you’re having trouble determining what your dog is trying to tell you with his body language communications, ask a force-free dog training professional to help you. It could save your dog’s life. And your child’s.